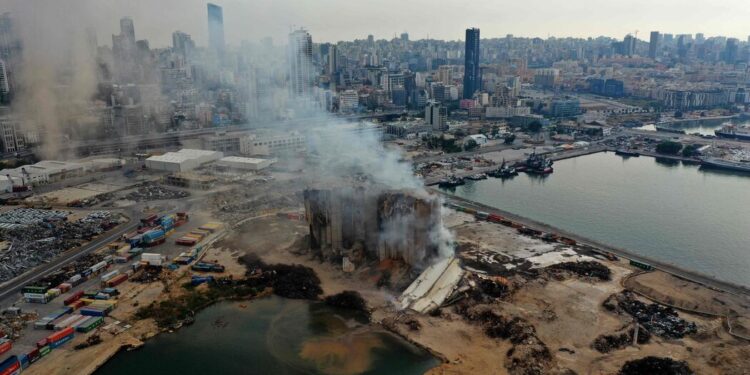 BEIRUT — On its second anniversary, the massive harbor explosion that rocked Beirut in 2020 continued to wreak havoc on the city as grain silos marred by the blast partially collapsed on Thursday. Thousands of people had gathered nearby to celebrate the day and protest the lack of responsibility for the explosion, which killed more than 200 people.

The partial collapse of the grain silos on Thursday came just days after another portion of the silos fell, sending large plumes of gray smoke and dust over the harbor and nearby neighborhoods, uncomfortably recalling the August 4, 2020 blast cloud that destroyed parts of the Lebanese capital two years ago.

Since then, the colossal remains of the silos have loomed over the damaged harbor and neighborhoods that suffered the billions of dollars worth of damage and destruction, a reminder of how little has improved in the aftermath of the blast.

Lebanese officials have long warned of the possibility of the silos collapsing.

On July 25, after a fire broke out there, the ministries of environment and health warned that the silos were deteriorating. The ministries advised residents to close their windows and wear face masks.

“In the event of a collapse or falling parts, dust, consisting of construction debris and some molds, will be emitted from the rotting grains and dispersed into the air,” the ministry’s statement said. “According to experts, there is no scientific evidence for the presence of asbestos or other toxic substances.”

On Sunday, another part of the silos collapsed. In total, four parts of the silos have fallen, according to Lebanese state media.

Firefighters have been fighting a fire in the port for months, said Lieutenant Ali Najm, spokesman for the Beirut Fire Department. But every time they put it out, sometimes twice a day, the fire started again, he said.

He said he expected the rest of the silos to collapse soon.

Lea Saad, a 23-year-old architecture student, was injured in the 2020 explosion when a piece of metal tore in her back. She was on her way to the harbor on Thursday to protest and celebrate the anniversary when the silos fell.

“It feels like with every silo that falls down, some of it feels like you’re slowly watching the memory fade,” she said, adding that it was both sad and a relief.

“It’s kind of erasing the memory of something that was very traumatic in a way that it’s being swept under the carpet as if it never existed,” said Ms Saad, as a helicopter flew over with firefighters trying to put out the fire. on the silo site.

The explosion, caused by the sudden incineration of some 2,750 tons of volatile chemicals that had been present in the port for years, exposed what many Lebanese saw as decades of bad governance and corruption.

Some of those who had gathered in the last plume of dust and smoke to cover the harbor were holding signs calling for an international investigation. Some read, “Justice is coming.”

In the two years since the blast, the investigation has been plagued with controversy and criticism, and no one has yet been held accountable.

Mohamed Al Turk, a 57-year-old father of three who works for an insurance company, saw the silos collapse. He had come to the harbor wearing a T-shirt that read, “Justice is my demand.”

“I wish the silos were still there because they will be evidence of the crimes our leaders have committed,” he said. “Every time they pass by here, those leaders will see the traces of their crime.”

Tensions over the port investigation erupted in October in some of the most violent clashes Beirut has seen in years after the judge investigating the explosion, Tarek Bitar, issued a warrant for the arrest of a prominent Shia MP.

In response, Hezbollah, the Lebanese Shia militia and political party, criticized Judge Bitar, accusing him of politically targeting officials in the investigation. It called for protests, which turned into deadly violence.

Lebanon has been in free fall since late 2019, with crippling political and economic crises leaving the Mediterranean country in a state of dysfunction. Lebanon’s currency has fallen more than 90 percent in value, leading to massive inflation and the departure of many residents who may be leaving.