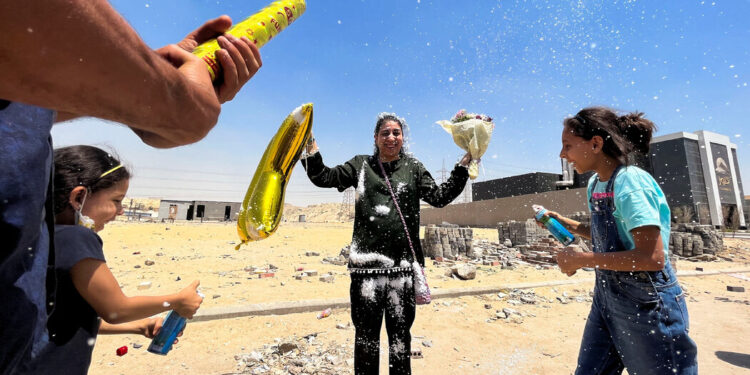 CAIRO — It was hot, Egypt-hot, when friends and relatives gathered outside the concrete walls of Cairo’s infamous Torah prison one morning recently to greet the recently released. The flowers brought by a family began to wither. Babies cried. The crowd was packed in the shadows, greetings and laughter interspersed with silence, their excitement punctuated by the tension.

Against the clock, the prison authorities arrived too late. But Khaled Dawoud, a former prisoner, was used to their manners. By Egyptian standards, he joked, a three-hour delay to see his former cellmate and five other political prisoners walk free was nothing.

“My heart is beating,” Mr. Dawoud said, clapping his hand over his chest. A journalist and opposition politician, he had spent more than 18 months in Torah as a political prisoner before being released last year. “I’ve been through what they’ve been through,” he added. “Swear to God, today is the peak of the peak.”

Over the past decade, when President Abdel Fattah el-Sisi tightened his grip on power by banishing the smallest signs of discord, tens of thousands of political prisoners have been arrested. They are held for weeks, months or even years without charge or trial — at least 4,500 of them in the six months between September 2020 and February 2021, DailyExpertNews found, and often in conditions ranging from abusive to life-threatening.

Lately there has been a sudden shift.

Authorities have released at least 400 detainees since April, when Mr el-Sisi unveiled a new clemency commission and called for a “national dialogue” with opposition parties to discuss greater political openness.

Political analysts see this as part of an effort to clear the human rights situation in Egypt before hosting a United Nations climate conference in November, and perhaps to make concessions to a population hit by rising prices.

“Something is finally moving,” said Mohamed Lotfy, the executive director of Egypt’s Commission on Rights and Freedoms, who also waited outside the Torah prison, arms folded, at Alaa Essam Ramadan, the former cellmate of Mr Dawoud.

Members of the pardon committee recently said more than 1,000 people – including politicians, political activists and journalists – are eligible for release. But at the same time, lawyers say, authorities are making new arrests every day, while at least 33 of those released since April have been re-detained under new charges.

Most of those released from Torah prison on that hot June day had waited three years, never been formally charged, and never executed. After all that, it suddenly felt supersonic to be pardoned.

No one outside the secretive Sisi government knows why, exactly, or why now. But for the dozens of friends and relatives waiting outside Torah, the releases were long overdue.

“This is the first time since 2018 that no one I really care about has been in jail,” said Lobna Monieb, a podcast producer whose father, cousin and friend have all been detained in recent years. “It’s a good time.”

Her cousin was released in 2019, her father last year. Now she awaited the release of her friend, Kholoud Said, a translator and researcher at the famous Great Library of Alexandria. Ms Said was first arrested in April 2020 after posting critical messages about the government on Facebook. Like thousands of other political prisoners, she was accused of being a member of a terrorist group, spreading fake news and abusing social media. But she was never formally charged or tried.

Others among the crowd outside Torah Prison fanned out on hard benches, awaiting permission to visit detained relatives inside. Many had brought medicine and plastic bags of food, even though they knew they might not be allowed to give it to the prisoners. The rules were constantly changing: Peanuts were sometimes allowed, but only when skinned; dates had to be pitted. Today the guards had told them that the lemons and cucumbers had run out.

Mr. Dawoud knew why. Inmates often tried to smuggle in hashish and SIM cards in fruits and vegetables, he said.

Feeling that Mr. Dawoud was an authority among the crowd, a trio of women approached him and asked if he could do anything for their sons. A man had been in custody for eight years; another, five.

They were among the tens of thousands of Egyptian political prisoners who mostly remain unnamed, many of them Islamists—those who never exert Western pressure for their release because hardly anyone knows what happened to them or why.

“It’s very different from this side, isn’t it?” he said to Walid Shawky, another former inmate who had come to welcome the freedmen.

Mr Shawky, a dentist and political activist, had been in custody for four years before being released in April.

Mr. Dawoud remembered how that went.

“The best thing for you is your daughter,” he said. Nour, 5-year-old Mr. Shawky, was just getting used to having him around, he said.

Seeing that the families were waiting for a visit, Mr. Dawoud filled him with guilt over what his own loved ones had been through. His sister had died while he was being held; his father contracted cancer and died shortly after his release.

But since he was released last year, Mr. Dawoud said he had tried to move on. He was married and had a daughter. Now government officials have called on him to participate in Mr. el-Sisi. Perhaps, he said, but he had one demand: release my friends first.

Other opposition figures have also urged the government to release hundreds of detainees as a condition of participating in the dialogue. Releases have followed, albeit less and slower than they had hoped. The government says it has released at least 700, while the opposition estimates the number to be around 400.

But even after political prisoners leave detention, the shackles remain for many in one form or another. Most of their cases remain open, allowing their prosecution to resume at any time. Some former inmates have to return to police stations for nightly or weekly checks, or on delicate political anniversaries; others are not allowed to travel.

In that sense Mr. Dawoud had been lucky. Now he let a baby dangle on his knee, greeted his former cellmate’s mother, checked his phone, answered a call, then shouted congratulations to another family.

“I never want to come here again,” he said.

When two hours went to three and the temperature rose to 100 degrees, a government photographer arrived – the proof, said Mr. Dawoud, that the authorities wanted to publish the publications. But even the official photographer had to wait.

‘I’m frozen now. But I think if I see her, everything will change,” she said. “But there is still the injustice. We are super happy, but we want to know, why did this happen?”

Men in suits came and went behind the prison gates, smoking and checking their phones.

Mr. Dawoud had managed to get the attention of one of them, a prison officer he remembered from his time in detention. He gestured to him, spreading his hands with exaggerated impatience: when are they coming out?

The officer pointed to the ground twice, staccato: Now. Utilities.

Mr. Dawoud raised his hands in the air, pantomimes of ecstasy.

“Thank God!” he screamed. “I think Kholoud is coming now.”

Then suddenly he called her name.

People clapped. Women bellowed and bellowed again. Without words but smiling, Mrs. Said hugged her friends and family one by one. Tears fell. Someone’s phone rang with the ringtone that all Samsungs play by default, a sentimental wave of violins, but in the tumult and joy no one bothered to pick it up.