He Says, She Says: A Biblical Tongue Meets Gender Politics 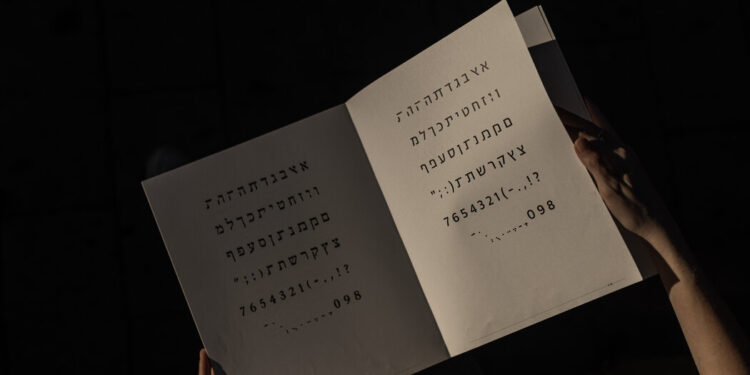 JERUSALEM – Rooted in a biblical patriarchy and reinvented 3,000 years later to become the lingua franca of Israel today, Hebrew has become the focus of efforts to make it more inclusive in the modern age.

Hardly a sentence can be spoken in Hebrew without mentioning the gender; each object has an assigned gender – for example, a table is male and a door is female – and the language lacks gender neutral terms for people and groups of people.

But in recent years, many Israelis have pushed for adapting Hebrew and even its alphabet to deal with what they see as inherent biases in a language whose modern form retained the grammatical norms of biblical times.

“If I want to send a message to a group of men, women and non-binary people, how do I address that group in a way that includes everyone?” asked Michal Shomer, an activist who is pushing to make Hebrew less gender-specific and who has created a set of all-encompassing characters for the Hebrew alphabet.

“Research has shown that using the ‘default’ masculine form has a negative effect on girls and women and their chances of succeeding in modern society,” she added.

The lack of gender-neutral pronouns and constructions in Hebrew means that the masculine plural form of verbs and pronouns has long been used as a standard form when referring to, or addressing, a mixed audience, for example.

Now, when Israelis target or refer to a mixed or general group of people, they increasingly use both the masculine and feminine forms of each verb and pronoun, along with their associated adjectives, or mix them up in an attempt to create a more inclusive Hebrew. .

However, such efforts have been criticized by some Israelis as cumbersome and unnecessary tinkering with the Jewish state’s cherished official language, which is a binding feature of identity. It has also sparked a backlash from religious conservatives.

Critics complain that the constant doubling of genders turns any sentence into a potential tongue twister and hinders the natural flow of speech and prose.

“Repeating that more than once is terrible, the lyrics become one big annoyance, you don’t want to hear it anymore!” grumbled Ruvik Rosenthal, a linguist who, in his latest book, “My Life, My Language,” a chapter on gender and Israel’s lingua franca entitled “In Praise of Sex Maniac Hebrew,” borrowed a phrase from Yona Wallach, a feminist poet.

Referring to what he called “manipulated” writing, the use of slashes and periods in an arduous attempt to include both gender endings that have become increasingly common in Israel in recent years, Mr. Rosenthal added: “It is not grammatical It’s ugly, it’s complicated and practically unsuitable for speech.”

Some ultra-conservatives and strict Orthodox Jews oppose the new focus on language equality, rejecting the principle of equality in general. Avi Maoz, a lawmaker from an anti-LGBTQ rights party, has protested the use on government forms of a gender-neutral formula for determining parental information, “Parent 1” and “Parent 2,” which includes same-sex couples.

In a measure of how seriously many Israelis take their language, the social media platforms of the venerable Academy of the Hebrew Language, the state authority on Hebrew science, are among the most popular in the country, with more than a million views per month .

The academy, tasked with coming up with Hebrew words to keep up with the times and upholding grammatical standards, must arbitrate between linguistic anarchy and societal change.

Called on to contribute to the gender debate, it has recommended the moderate and judicious use of both the masculine and feminine forms in certain situations, without going overboard.

But the scholars are also skeptical about the new language campaigns.

“People feel that if they speak this way and not that way, things will turn out the way they want,” said Ronit Gadish, head of the Academy’s Scientific Secretariat, which is tasked with setting standards for modern technology. Hebrew. “Gender equality is on that platform. People tell themselves that if they adapt the language to their agenda, they will win their battle for some reason.”

Hebrew is certainly not the only language that has been the target of calls for change. Many world languages, such as French, make any noun masculine or feminine. And the United Nations has established guidelines for non-discriminatory communication in the organization’s six official languages: Arabic, Chinese, English, French, Russian and Spanish.

Also, gender inclusiveness is not the only existential problem Hebrew faces. Many Israelis pepper their speech with English terms, and especially among tech entrepreneurs, English professional terms are often used in their original or in some cannibalized, Hebraic form.

But it is the gender issue that causes the most fear in Israel.

Merav Michaeli, the feminist leader of the Labor Party, is widely credited with leading the charge for a more inclusive Hebrew. At first she tended to use only the feminine form, but she’s moved to more frequent use of both.

Among the native Arabic-speaking citizens who make up one-fifth of Israel’s population, no such prominent movement for more gender-inclusive language seems to have emerged yet, although some young, progressive Palestinians usually associated with the feminist movement are making a point of tackling mixed groups in female forms.

Chaim Levinson, a Hebrew-speaking journalist and radio host, said he was having trouble with the new “multi-gender” language campaign.

“It is not self-evident for people; it takes a lot of effort’, he says.

“The religiously observant are against multi-gender language because of equality,” he added. “I am against clumsiness. For my part, let it all be in the female form.”

At the beginning of this academic year, Mr. Levinson, who also teaches new media at a college in Jerusalem, received a letter from the college in his inbox with a link to a 24-page manual of gender-inclusive language guidelines.

It was subtitled, “Language Creates Reality.” But some experts say it should be the other way around.

“The public’s concern is clear,” said Vicky Teplitsky Ben-Saadon, terminology coordinator at the Scientific Secretariat of the Hebrew Language Academy, citing the number of questions the institute is receiving about the matter. Linguistically, we are not the owners of Hebrew at the academy. We’re not inventing it,” she said, adding: “We set a standard based on what’s proven itself. A living language develops as it develops.”

Some US students and academics have tried to set up gender-inclusive Hebrew language projects, but have failed here.

Then there’s Ms. Shomer’s innovation of a dozen new Hebrew characters – 11 all-inclusive letters that combine masculine and feminine markings and one new vowel character. As a visual communication designer, she created the system as part of her graduation project.

Critics say the combined glyphs are unpronounceable and are especially good for graphic signage, such as the multi-gender “Welcome” signs with her characters that now hang outside many Israeli schools.

But according to Ms. Shomer, there have been more than 12,000 downloads of her free program featuring the new inclusive characters since it was released in early 2021.

“Letters are not added to a language in a day,” she said. “I’m patient. I know change takes time.”