Iran says it will execute Iranian-Swedish scientist accused of spying 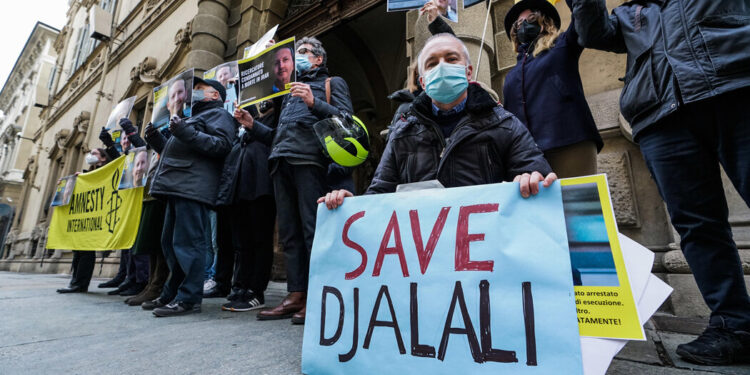 Iran’s judiciary said Tuesday it would carry out the execution of an Iranian-Swedish scientist accused of spying for Israel and aiding the assassination of Iranian nuclear scientists.

The announcement of the planned execution of scientist, Ahmadreza Djalali, who has denied all charges against him, coincided with the conclusion of a landmark trial in Sweden where, for the first time outside Iran, a former Iranian official was tried for humanitarian crimes.

Swedish prosecutors have demanded a life sentence for the official, Hamid Nouri, who was arrested in 2019 while traveling to Sweden for his role in the mass execution of 5,000 dissidents in the 1980s. He has denied the allegations. A ruling is expected in July, according to the Swedish judiciary.

In a separate case, Belgium’s judiciary announced on Tuesday that it would uphold previous sentences against three Iranians, including a high-ranking diplomat, who had been convicted of plotting a terrorist attack in Paris against an Iranian opposition group.

Human rights groups condemned the Islamic Republic for what they called its pattern of hostage diplomacy, in which dual nationals or aliens are held on trumped-up charges of espionage and then used politically to release or exchange frozen assets for Iranian citizens imprisoned in other countries .

“The Iranian judiciary has made it clear by announcing its intention to execute Djalali that he is a hostage and that his life is being used to influence the judicial decision in Sweden,” said Hadi Ghaemi, the director of the Center for Human Rights. in Iran. an independent advocacy group based in New York City.

Iranian judiciary spokesman Zabihollah Khodaian denied that the cases of Mr. Djalali and Mr. Nouri were related or that Iran was seeking an exchange, according to Iranian media.

“There is no discussion of an exchange and the judiciary will act on the verdict,” Mr Khodaian told Iran’s ISNA news agency.

mr. Djalali, a 50-year-old doctor and teacher at the Karolinska Institute in Stockholm, migrated to Sweden in 2009 to study for a doctorate, according to his family. He had traveled to Iran in 2016 at the invitation of a university to participate in an academic workshop when he was arrested.

Last week, Iranian news media, citing anonymous sources, reported that Mr. Djalali was to be executed at the end of May.

His wife, Vida Mehrannia, said in a telephone interview from Sweden on Tuesday that the ordeal had shattered the family. She said she woke up every day for fear that Iran would execute her husband and what she would tell their daughter, 19, and son, 10. They have not spoken to Mr Djalali since news that his execution was imminent, said they.

Mehrannia said her husband had never been to Israel and had no contact with governments of countries Iran considers hostile.

“I never expected that they would treat us like pawns in their political games,” Ms Mehrannia said crying during the interview. “I feel broken. Sweden keeps telling me it will resolve this diplomatically, but nothing has happened yet.”

The cases in Sweden and Iran have led to tensions between the two countries. If Iran carries out the execution of a Swedish citizen, tensions with Europe will escalate at a time when Iran is still negotiating a nuclear deal with the West.

The Swedish Foreign Ministry said on Friday that a 30-year-old Swedish tourist was arrested in Iran when he left the country with a group of other tourists. At the end of April, Sweden had warned its citizens against traveling to Iran.

Iran’s foreign ministry said the foreign ministers of the two countries met by phone last Wednesday. The outcome of that conversation and the prospect of a diplomatic breakthrough were unclear.

On May 4, Swedish Foreign Minister Ann Linde tweeted: “Extremely disturbing media reports today that Iran may impose the death penalty on Swedish citizen Ahmadreza Djalali.” She said Sweden condemned the death penalty against Djalali and demanded that Iran release him.

Ms Linde did not appear to have publicly responded to Tuesday’s official announcement by the Iranian judiciary.