Israel builds a laser weapon to zap threats from the sky 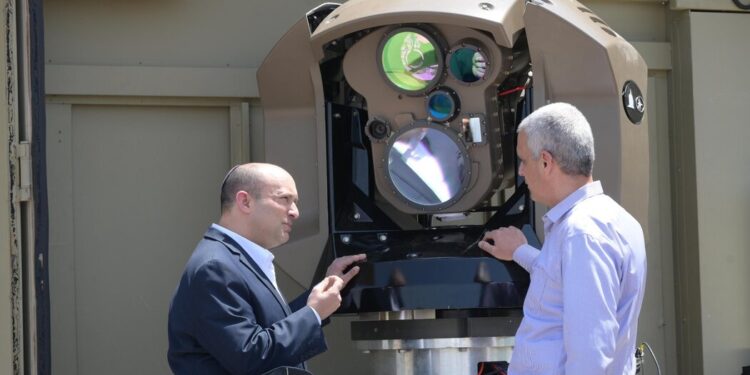 JERUSALEM – After two decades of research and experimentation, Israeli defense officials now say they have a working prototype of a high-performance laser cannon that can intercept missiles, mortar shells, drones and anti-tank missiles in flight.

Officials said the system performed successfully in a recent series of live-fire tests in the southern Israeli desert, destroying a rocket, mortar round and a drone and provoking a standing ovation from officials watching the action on screen.

The government has earmarked hundreds of millions of dollars to develop the weapon, which Prime Minister Naftali Bennett this week described as a “strategic game changer.” He has promised to “surround Israel with a laser wall”.

Professionals involved in developing the system say it is several years away from being fully operational in the field, and experts warn that even then it may be of limited use in protecting Israel from heavy incoming rocket fire. . Israeli officials have not said whether it would be effective against the precision-guided missiles Israel claims are being developed by Hezbollah in Lebanon.

Still, laser weapons have moved from sci-fi movies and the gaming fantasy genre to reality. At least one laser weapon, Lockheed Martin’s Helios, has been deployed on US naval vessels.

“There’s a lot of promising laser work going on,” said Thomas Karako, a senior fellow at the Center for Strategic and International Studies in Washington. “This isn’t ‘Star Wars’ science fiction anymore.”

The US military has also been working on laser weapons, including more powerful ones that can bring down cruise missiles, and is on its way to deployment, Mr Karako said.

None have been battle-tested to date, however, and laser beams have serious limitations, such as not being able to shoot through clouds.

While those systems fire small guided missiles to intercept incoming projectiles, the new weapon trains laser beams at a specific spot on the projectile and heats it to the point of destruction.

Israeli Defense Minister Benny Gantz said Israel was “one of the first countries in the world” to develop such a weapon.

Brig. Gene. Yaniv Rotem, head of the Defense Ministry’s research and development team, said that during the March live fire tests, incoming threats were intercepted within seconds of detection, not minutes as in previous tests, and from a distance of up to six miles. .

“We have a complete system to demonstrate the ability,” he said in an interview. “We are there.”

The search for laser weapons has a long history of failure.

In 1983, President Ronald Reagan founded the Strategic Defense Initiative, widely derided as “Star Wars,” to find a way to shoot down nuclear ballistic missiles, including laser technology. After spending over $200 billion and showing little sign of it, that effort was halted in 1993.

But the research continued among other programs. In the late 1990s, Israel and the United States attempted to produce an experimental, high-energy laser system with a less ambitious range, aimed at destroying missiles in flight. That effort, known as Nautilus, was shelved in 2005, in part due to the system’s size and poor performance.

Technology has now shifted from the chemical laser, which required corrosive and toxic chemicals to induce a beam and machines nearly the size of an on-site lab, to the solid-state laser, which only requires large amounts of electricity.

And in a recent technological breakthrough, the Israeli developers say they were able to combine many laser beams, at a very high intensity, and make them meet at a specific point on a target in the sky.

The Israeli Defense Ministry recently awarded a contract worth more than $100 million to state-owned Rafael Advanced Defense Systems Ltd., the main manufacturer of the laser system.

“We’ve been working on laser technologies for about 20 years,” Michael Lurie, vice president and head of the Land Maneuver Systems Directorate at Rafael, said in an interview. “They were very cumbersome, large and ineffective. We had issues with energy, tracking and the ability to pierce the atmosphere.”

But over the past few years, he said, “We’ve solved the science. Right now, we’re facing technical challenges. But we know the system works.”

Israeli officials say the Iron Beam’s main benefit will be its cost, with interceptions costing little more than the power needed to operate it. Mr. Bennett said Iron Beam’s intercepts cost about $3.50 per shot, compared to tens of thousands of dollars each for each Iron Dome intercept.

In addition, Iron Dome is heavily subsidized by the United States, which has allocated an additional billion dollars for the weapon in its 2022 budget at a time when US military aid to Israel has become increasingly controversial. Israel is also sharing its knowledge of Iron Beam with its US allies, Israeli officials said.

General Rotem said Iron Beam would reverse the economic equation with Israel’s enemies and that Israel would recoup its investment in just two weeks of conflict. The first deployment would be around Gaza, he said, and then along all of Israel’s hostile borders.

“Israel has never let go of the idea of ​​laser technology,” said Prof. Gabi Siboni, a military strategy expert at the Jerusalem Institute for Strategy and Security, an Israeli research center. “It will be cheaper, safer and less dependent on rearmament.”

But the developers acknowledged that the weather requires the laser system to be integrated with the other kinetic interception systems: the laser beams are not effective in hazy and cloudy conditions.

Israel is working on a powerful aerial laser that could intercept threats above the clouds, but that will likely take years to develop.

Experts also wondered how cheap it really will be to deploy and operate Iron Beam.

Unlike an Iron Dome launcher, which can fire multiple interceptors at once, each finding its own target, laser weapons must focus on one target before moving on to another, according to Tal Inbar, an independent expert in space and missiles and missiles. senior research associate at the Missile Defense Advocacy Alliance, a US non-partisan organization.

“So you’re going to need a lot more systems on the ground,” Mr Inbar said, “even if they’re described as very cheap because they only require electricity.”

But cheap is relative in the world of military spending.

A senior military official said in a recent briefing that Israeli F-35 stealth fighter jets had intercepted two Iranian drones in the airspace of a neighboring country last year. Scrambling the most advanced warplanes in Israel’s arsenal to bring down cheap drones underscored the huge cost imbalance Israel faces in defending against relatively cheap missiles and drones, the official said, speaking on condition of anonymity in accordance with military rules.