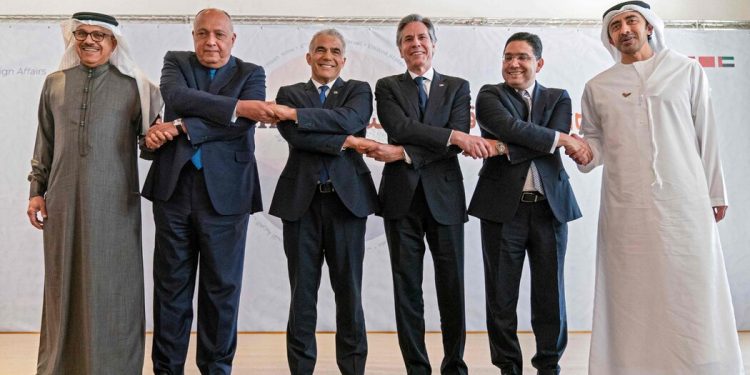 It enabled the five states in the Middle East — Bahrain, Egypt, Morocco, the United Arab Emirates and Israel — to collectively encourage the United States to remain engaged in the region, despite its focus on Russia and China. And it gave them the opportunity to lobby Mr. Blinken not to lift sanctions against Iran’s Islamic Revolutionary Guard Corps, a major Iranian military force, in exchange for curbing its nuclear ambitions.

“What we are doing here is making history – building a new regional architecture based on progress, technology, religious tolerance, security and intelligence cooperation,” said Israeli Foreign Minister Yair Lapid, who hosted the conference. .

“This new architecture, the shared capabilities we are building,” he added, “intimidates and deters our common enemies, first of all Iran and its proxies.”

Perhaps the most important aspect of the summit was the fact that it took place at all.

When Israel signed normalization agreements with the UAE, Bahrain and Morocco in 2020, with the help of the Trump administration, it was unclear how sustainable or meaningful the relations would be. The fact that all three met for the first time on Israeli soil almost two years later shows how close those ties have become.

The presence of Egypt, the first Arab country to make peace with Israel in 1979, also highlighted how the 2020 agreements have encouraged Cairo to revive a relationship it had long neglected.

“This is our first time” in Israel, Sheikh Abdullah said in his closing statement. “If sometimes we’re curious, and we want to know and learn things, it’s because although Israel has been part of this region for a long time, we don’t know each other. So it’s time to catch up.”