Netanyahu’s Plan to Regain Power in Israel: Vote Against His Views 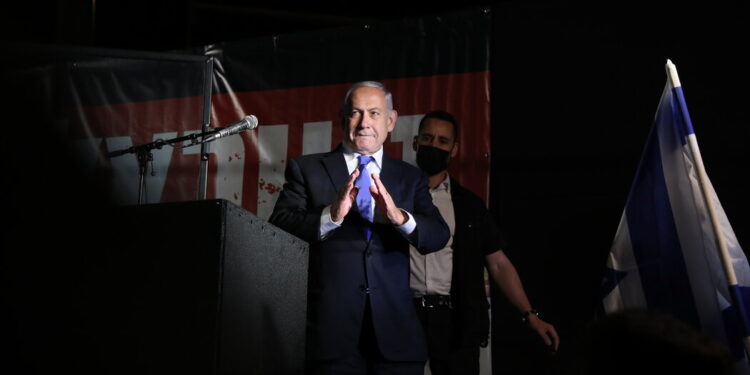 JERUSALEM – Nearly a year after losing power, Israel’s former Prime Minister Benjamin Netanyahu has devised a strategy to win it back: vote against his beliefs and those of his strongest supporters.

In one of the strangest periods in Israeli political history, Netanyahu’s right-wing opposition alliance voted Monday against extending the law that would apply Israeli citizen statutes to Israelis in the occupied West Bank.

Thanks to Mr Netanyahu’s intervention, the legislation was not passed, potentially hindering a significant part of his electoral base, the settlers in the West Bank. If the law is not renewed by the end of June, when the current one expires, the settlers will likely be subject to military rather than civilian laws, putting them on a similar legal basis to their Palestinian neighbors.

“A world upside down,” Sima Kadmon, columnist for Yedioth Ahronoth, a centrist broadsheet, wrote in a column Tuesday. Netanyahu’s bloc “voted against a bill that serves the interests of their own voters.”

The law is the basis of the bipartisan legal system in the occupied West Bank that distinguishes between Israeli settlers and Palestinians, and has been described by critics as a form of apartheid.

However, Mr. Netanyahu has not suddenly changed politically; he still supports the law and the settler movement.

But for now, he cares more about bringing down the current government and making himself prime minister again. To do that, his party, Likud, refuses to vote for any of the government’s proposed legislation, even if it agrees.

Netanyahu’s goal is to deepen divisions within the government, a fragile and diverse alliance of parties across Israel’s political spectrum. Some left-wing members of the governing coalition also voted against extending the law or abstained because they opposed it.

Without them and Netanyahu’s supporters, the government is struggling to rally the parliamentary majorities needed to pass legislation that promotes a right-wing program.

By withholding support for those measures, Mr Netanyahu hopes to convince right-wing lawmakers to leave the coalition and join his camp. He argues that only a purely right-wing government, led by Netanyahu himself and unimpeded by left-wing parties, can fulfill a truly right-wing agenda.

“We want the right wing, under Netanyahu, to lead,” Miki Zohar, a senior Likud lawmaker, said in a radio interview on Tuesday, adding: “Giving this coalition breathing room is not something we want to do. overthrow this coalition and the sooner the better.”

Netanyahu is on trial for corruption, and his opponents say a new term in office would allow him to take measures that undermine the judiciary and even the prosecutors in his trial. Mr Netanyahu has denied the claim.

Withholding support for right-wing ideas is not a new approach. Netanyahu has tried since he lost office — most memorably by withdrawing Likud’s support for legislation that limits Palestinians’ ability to join spouses in Israel, and initially refusing to grant scholarships to Israeli military veterans. supports.

In those cases, the coalition survived — but this time, the plan might work. Gideon Saar, the pro-settler justice minister, has hinted that his party could step out of government if the law fails to strip the alliance of a majority before the end of the month.

Once an ally of Netanyahu, Mr Saar joined the governing coalition last year to force his former colleague from power. Twelve months later, however, Mr. Saar has hinted that the government is not worth fighting for if the struggle is undermining the settlement enterprise.

“Survival is not a value in itself,” he said last week.

Legislation may still come. Mr Saar cast a second vote before Sunday and if that fails, he still has time to hold a third ballot before the end of the month. In the meantime, Mr. Netanyahu and his allies face significant pressure from settlers to put their beliefs above their political ambitions, and they may end up supporting or abstaining from voting.

“The opposition is harming the people of Judea and Samaria” — an Israeli term for the West Bank — “to hallow Netanyahu’s leadership,” David Elhayani, a settler leader, lamented Monday. “Moral contempt for the Likud,” he added.

Prime Minister Naftali Bennett and other coalition leaders are exerting enormous pressure on hesitant left-wing and Arab lawmakers within their alliance, several of whom abstained or voted against the law. The leaders argue that opponents of the settlement bill should see it as a lesser evil compared to the collapse of the government, which would give Netanyahu a chance to return to power.

A similar uprising was crushed last month when a Palestinian-Israeli lawmaker, Ghada Rinawie Zoabi, withdrew her resignation from the coalition after she was promised additional government support for Arabs in Israel.

Still, most analysts believe the government’s disintegration is only a matter of time. The coalition has not had a parliamentary majority since April, when a right-wing lawmaker, Idit Silman, left the alliance, saying it was undermining Israel’s Jewish character.

One last resignation could enable the opposition to call new elections. Going through an entire batch, such as Mr. Sarah, would Mr. Enable Netanyahu to form a new parliamentary majority without going to new elections.

Without a majority, the government “cannot function and must die,” Nadav Eyal, another Israeli columnist, wrote in Yedioth Ahronoth on Tuesday. “That could take days, weeks or months, but without a miracle it is his fate to fall apart.”

For many Palestinians, however, the focus on how the settlement law could affect internal Israeli politics is a distraction from a more meaningful conversation about the morality of the Israeli occupation of the West Bank.

Those who warn that the government will fall if the law is not passed are “trying to escape the true meaning of the law,” said Aida Touma-Suleiman, a Palestinian-Israeli opposition lawmaker who voted against the measure on Monday.

“This law is the operating system of the illegal occupation, of apartheid in the occupied Palestinian territories,” she added in a speech to parliament shortly before the vote.

Reporting contributed by Gabby Sobelman from Rehovot, Israel, and Myra Noveck from Jerusalem.