Thundering through modern Jordan, a railway from the past 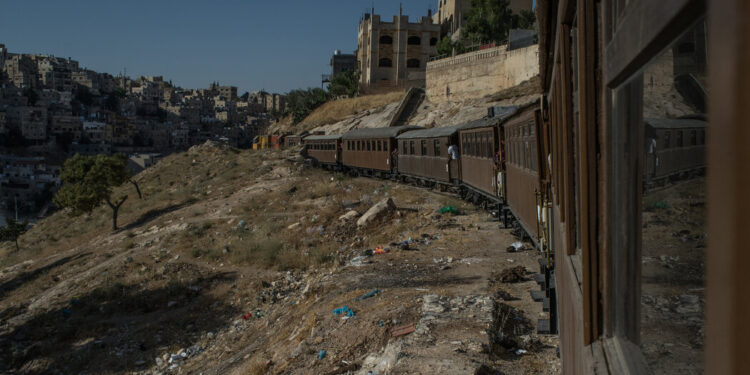 AMMAN, Jordan — Astride ancient tracks that ran through the modern metropolis of Amman, a historic train horned a horn to announce its departure. That sound spurred families with sacks of food, pots of coffee, coolers of soda, grills, bongs and lots of children into action, climbing iron ladders to settle in the wooden carriages of the train.

But the party had already started in car No. 9, where a group of women and dozens of children clapped along to an Arabic pop song blasted from a battery-powered speaker with flashing disco lights.

The train blew its horn again and came to life with a jolt, shocking the revelers, who laughed as they straightened themselves and burst into applause at the sight of the world outside their windows sliding past.

Thus began a recent journey from Amman, the capital of Jordan, on the last working stretch of the original Hejaz Railway, the most iconic train in the Middle East.

Built by the Ottomans in the early 20th century, blown up by Lawrence of Arabia and Arab fighters during World War I, and used as a nostalgic backdrop in “The Mummy Returns” and in syrupy Arabic music videos about lost loved ones, the railway is a remnant of the bygone dream of regional unity before wars, borders and more advanced modes of transport made its services obsolete.

A pet project of Sultan Abdul Hamid II, the railway was completed in 1908 and ran more than 800 miles through the mountains and deserts of the Levant and Arabia to transport pilgrims from Damascus to Medina, one of Islam’s holiest cities, now in Saudi Arabia . From there they would travel on by other means to Mecca, the center of the pilgrimage.

Secondary lines ran to Haifa – now a major Israeli city – and Beirut, the Lebanese capital on the Mediterranean coast. And there were plans to connect the line to Constantinople, the Ottoman capital, in the north and all the way to Mecca in the south, stitching together much of the Ottoman Empire.

But just six years after the train’s first triumphant arrival in Medina on September 1, 1908, World War I broke out, leading to the disintegration of the empire and new frontiers. Haifa’s line went out of service around 1948, when the creation of Israel brought it into war with its Arab neighbors. The Beirut line stopped around the start of Lebanon’s 15-year civil war in 1975.

Now the narrow gauge railways remain, but the mainline of the railway crosses three countries – Syria, Jordan and Saudi Arabia – whose leaders have shown little interest in reviving the project.

Saudi Arabia welcomes pilgrims on their way to Mecca in an upscale airport terminal and takes them around the holy sites on a modern high-speed train. Rail traffic in Syria came to a standstill after the outbreak of the civil war in 2011.

That leaves only Jordan, which now offers 50-mile leisure trips from Amman to the Al Jizah station south of the city and back, with a four-hour lunch break in the middle.

It’s a journey that doesn’t go anywhere where no one should be, so the riders come for the journey — and a good dose of nostalgia.

“I like trains because they remind me of Agatha Christie novels,” said Islam Dawoud, 36, as she slumped in her red plush chair and stared out the window.

She first sat on the train as a schoolgirl, she said. There was no air conditioning and the cars were dusty, but the memory stayed with her.

“What I loved was that the window was open and I could stick my head out,” she said.

The train departs in the morning from Amman station, a beautiful ivy-draped stone building from the first decade of the 20th century.

The yard contained two original but refurbished passenger carriages, including the one in which Abdullah I, the great-grandfather of the current King of Jordan, entered the city in 1921, when he became ruler of the area.

Parked nearby were seven gigantic black steam engines with red wheels. They all still work, but are only used on special occasions because they take hours to start up and are heavy polluters, said Nader Malkawi, a railway officer and train conductor who organizes the trips.

On its recent journey, the train was hauled by two diesel-electric locomotives built in 1976. Some parts of the cars were original, but most were Japanese tankers that Jordan converted into wooden passenger cars in 2005.

That upgrade also added electricity for lights, air conditioning and the speakers that played Arabic pop music in the cars throughout the journey.

Rail enthusiasts in Jordan also have another option: A line carrying phosphates to Aqaba, Jordan’s only coastal city, stopped running in 2018, Mr Malkawi said. But that line runs through Jordan’s scenic Wadi Rum, where tourists can take short rides and sometimes see a group of locals on horseback and dressed in period costumes reenacting Bedouin attacks.

The trips from Amman are longer, but without theater. Tickets cost $7 for riders 12 and older, and less for children. Those under 3 ride for free. The train has a snack car and a VIP car with plush seats, burgundy curtains and a crown on the door.

The journey was different three decades ago, said a passenger, Fidaa Abu Safia, 38, who first rode the same trails when she was six.

There was no music, the wooden seats were uncomfortable and it was hot, she said, but the train still felt magical. She remembered passing trees with yellow blossoms falling against the windows.

“It was the best trip of my life,” said Ms. Abu Safia.

As the upgraded train passed through the sprawling cinder blocks of South Amman, there were no blossoms to be seen. Instead, many industrial warehouses, junkyards and mechanical stores came into view, along with a giant failed shopping center and lots of trash along the tracks.

The railway lacks crossing guards to stop traffic; the police should do it. But they weren’t there that day, so the conductor slowed down approaching intersections and leaned on the horn as cars and motorcycles ran over until the last minute.

There has also been a problem with guys throwing rocks at the train to shatter the windows.

To stop them, railway workers had tried to distract them by throwing candy, Mr Malkawi said, but were unsuccessful. So they took the pictures of the boys and gave them to the police, who called on their parents to sign vows that their children would no longer attack the train. That tactic worked, most of the time.

The lack of scenic views didn’t bother Hussam al-Khatib, a soldier, who had heard of the trip on Facebook and brought his wife and their three sons with him. All were train drivers for the first time.

He said Jordan didn’t have great public transportation and the views weren’t great, but he thought it was important for Jordanians to know their country.

“We are proud of Jordan’s landmarks,” he said.

Outside Amman, the landscape opened up, with fields of golden corn, greenhouses full of tomatoes and aubergines, herds of sheep, the occasional herd of camels and barking dogs chasing the train.

In front of the station in Al Jizah, where passengers stopped for lunch, the train passed Amman International Airport, from where jets flew overhead, roaring memories of the technologies that had transformed the train from a cutting-edge mode of transportation into a historic curio.

At the station, as workers moved the locomotives from one end of the train to the other for the return journey, families claimed shady spots under cypress and eucalyptus trees and lit charcoal grills and water pipes as their children ran around a sandy playground and climbed on abandoned freight cars. .

Later, the train blew its horn and the riders turned back and took photos next to the cars.

The return journey was calmer, with the sun, the creaking cars and the steady click of the train rocking many children and some adults to sleep.

But Heba al-Shishan refused to miss any of it. As she smiled and took pictures as she took in the scenery, she also remembered a trip from her childhood. During that ride, the train had to stop because nomads had tied sheep to the tracks and had to move them before the journey could continue.

“These are experiences I will never forget,” said Ms. al-Shishan.