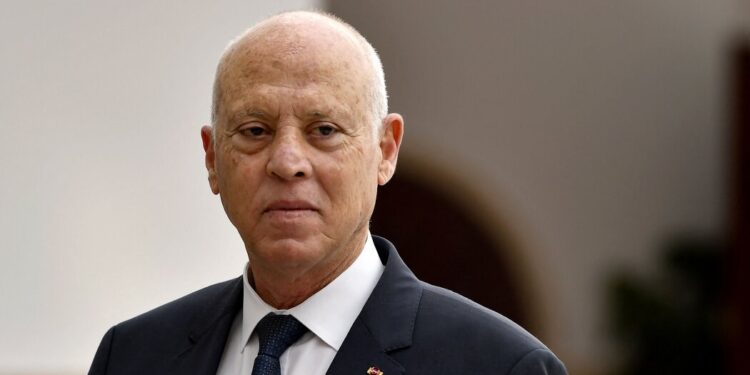 CAIRO — Tunisia’s president has taken another important step towards dismantling the country’s fledgling democracy in a recently declassified draft constitution, giving himself broad powers and weakening those of parliament and the judiciary.

President Kais Saied released the draft late Thursday, weeks before it goes to a national referendum to be held on July 25. If approved, critics said it would push Tunisia — the only democracy emerging from the 2011 Arab Spring protests still standing — further toward autocracy.

The draft outlines a political system “with an all-powerful president, a powerless parliament and a toothless judiciary,” said Benarbia, regional director for the Middle East and North Africa of the Geneva-based International Commission of Jurists. wrote on Twitter†

Tunisia has been in crisis since Saied suspended parliament and fired the prime minister nearly a year ago amid political paralysis and economic convulsions. He has since monopolized power in what he believes is a quest to reform the country’s dysfunctional government and purge it of corruption. He has seized control of previously independent institutions, imprisoned opponents, fired judges and ruled by decree.

His push for one-man rule has come as Tunisia’s economy is on the brink of collapse. The turmoil could jeopardize a much-needed bailout of the International Monetary Fund, which the lender says should only be delivered if Mr Saied’s political reforms are inclusive and receive broad public support.

But Tunisians are largely focused on making ends meet and pay little heed to Mr Saied’s proposals. Fewer than 10 percent of citizens eligible to participate in an online survey did, though it was billed as a way to shape the new constitution.

Political parties and civil society groups, including the country’s powerful workers’ union, have refused to participate in the drafting of the new constitution or in the forthcoming referendum.

In the end, the draft was written by a panel selected by Mr. Saied. The referendum is also widely expected to go in the direction of Mr Saied; he now controls the previously independent electoral authority and no minimum participation is required for the draft to pass.

If so, within weeks Saied will have recreated Tunisia’s 2014 constitution, written over two years of impassioned public debate.

That document — which came after the 2011 popular uprising that overthrew the country’s longtime dictator, Zine el-Abidine Ben Ali — limited presidential powers and enshrined rights, including freedom of expression and peaceful assembly. Parliament played a key role in forming a government and passing legislation.

Mr Saied’s draft retains most of the clauses of the current constitution regarding rights and freedoms. But it puts the president firmly in charge and relegates the judiciary and parliament to something more akin to bureaucrats.

Mr Saied would have the power to appoint the government (although Parliament could withdraw the government’s confidence by a two-thirds vote) and propose laws. Only the president would sign treaties and draft budgets and appoint or dismiss judges and ministers. The proposed constitution gives him the power to dissolve parliament, but there is no mechanism to remove the president.

The draft would give the president two five-year terms, which could be extended if there was an imminent threat to the country.

The draft also spawned a rebuke from Mr Saied’s main political enemy, the Islamist Ennahda party, which has dominated Parliament since the post-revolution transition and is widely reviled among Tunisians.

It proposes dropping references to Islam as Tunisia’s state religion, though it says the country is part of the wider Muslim community and requires the president to be Muslim.

In the short term, the draft would allow Mr Saied to continue to rule by decree until a new parliament is formed after the December elections. The legislative body would also look different, with the addition of a second chamber called a ‘Council of Regions’ in the draft – perhaps a nod to Mr Saied’s ideas about representatives of elected local councils, although little detail is given. Be given.

Analysts expect the constitutional referendum to succeed, but the political crisis in Tunisia is unlikely to be resolved as opposition to Mr Saied’s plans grows among both the elite and ordinary Tunisians. In the past month, judges have gone on strike, a national strike has paralyzed transport and other public sectors and several protests have challenged Mr Saied’s actions.

The draft would ban strikes by some public sector workers, including judges.

Still, the economy may be the single biggest factor in Mr Saied’s ultimate success or failure, analysts say. Already in shambles after years of corruption and mismanagement, it fell sharply after the coronavirus pandemic overwhelmed the all-important tourism industry and the war in Ukraine pushed food prices up.

For months, the government has struggled with distributing salaries on time or paying for wheat shipments.

Desperate for funding, the government has outlined plans to qualify for an IMF loan by cutting government wage bills and subsidies. Those reforms met fierce opposition from the country’s powerful national union, known by the French acronym UGTT, which went on strike last month to protest the proposals.

But even if a bailout helps cover Tunisia’s mounting debt, the government will still face reforming a hard-hit economy.

High unemployment and prices were key factors in the 2011 uprising, but they also played a major role in the massive outpouring of support for Saied’s coup last year. That support has weakened because Mr. Saied failed to straighten the ship.

But with the opposition still fragmented, divided and unable to propose a viable alternative, the president has not yet faced widespread unrest on the streets.