‘We haven’t forgotten Syria’: US envoy pledges to protect refugees 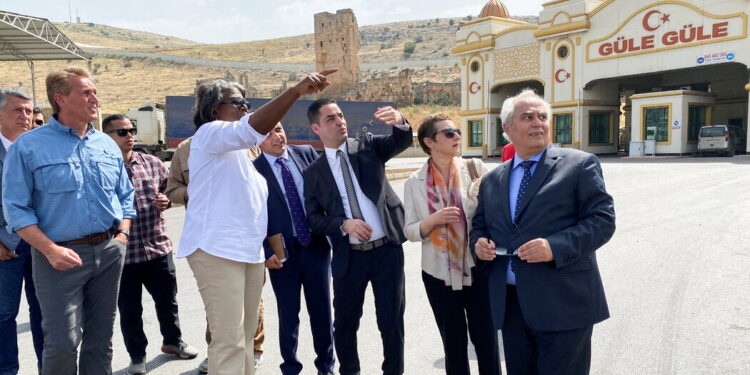 HATAY, Turkey – The Alaa Aldin family’s bakery could have been a victim of the Syrian civil war. Instead, it has become a symbol of what US officials describe as the resilience of refugees trying to survive a conflict many fear they have forgotten.

The three brothers Ahmad, Iyad and Bassam Alaa Aldin decided to relocate the company in 2013 to escape the violence that has since devastated their hometown, Idlib. With their wives and children, they crossed the border and opened a gleaming new bakery in the southern Turkish city of Hatay, in a neighborhood now so teeming with Syrians that it evokes comparisons to pre-war Damascus. Their 25 employees are also Syrian refugees.

“What this shows me and the world is that refugees can contribute to a country,” Linda Thomas-Greenfield, the US ambassador to the United Nations, said at the bakery this week, in front of piles of pistachio buns and baklava dripping with honey.

“The message they have heard from me is that we have not forgotten Syria,” she said as the brothers stood nearby.

It was also a targeted message to the government of Turkey, which wants to bring many of the 3.7 million Syrian refugees in the country back across the border.

In an already tense economy, many Turks have blamed refugees for accepting lower wages so that they are hired for a limited number of available jobs in the country. Tough politicians have long accused Turkish President Recep Tayyip Erdogan of having an open-door policy that they say allows an “invasion” of Syrians, Afghans and others escaping conflict.

Erdogan has promised to return at least some of the refugees, and this week he threatened another military offensive in Syria against Kurdish fighters, in part to clear safe passage for the refugees’ return.

The United States has criticized the planned Turkish attack, which targets Kurdish fighters in northern Syria in a conflict that long predates the civil war that began in 2011. On Wednesday, Foreign Minister Antony J. Blinken warned that a Turkish invasion of the region.

It could also force more Syrians to flee — as well as the possible closure of a route the United Nations uses to deliver food, water, medicines and other necessities to millions of people in northwestern Syria’s Idlib province.

Peace talks led by the United States and Russia have stalled for years, underpinning a decade of human devastation and diplomatic disappointment.

The Lasting Effect of the Syrian Civil War

After ten years of fighting, many Syrians are wondering if their country can be put back together.

After 11 years of war, Syria has become a warning example of what can happen in a conflict with no end in sight, such as the one that started 100 days ago in Ukraine.

“There is no global relief effort,” said Ammar al-Selmo, a member of the White Helmets, a rescue organization operating in rebel-held areas in Syria, mainly in the northwest of the country.

“There is no action against Syria,” he added, “and I am sorry to say that this war has been moved to Ukraine – the same tactics of war, which are now taking place in Ukraine, the same suffering.”

“What happened in Syria is a rehearsal for what happened later in Ukraine,” said Mr. al-Selmo.

Ms Thomas-Greenfield spent two days this week in Hatay and traveled to the Syrian border to assess the potential consequences if the United Nations were forced to end its aid deliveries to Idlib in July, as many diplomats and aid workers expect. UN officials are now already emptying their warehouses to put aid in Syria in case Russia vetoes an annual Security Council measure that would allow deliveries for another year.

Russia, a benefactor of Syrian President Bashar al-Assad, has accused international aid of violating Syria’s sovereignty and supporting extremists in Idlib. In a recent interview, Russia’s deputy ambassador to the United Nations, Dmitry Polyanskiy, expressed doubts as to whether the UN deliveries would go ahead, as the mission bottlenecks had only been cleared in recent years in last-minute negotiations with the United States.

Diplomatic talks between the United States and Russia have virtually ceased since Moscow invaded Ukraine in February. But Ms Thomas-Greenfield said she would try to reopen talks with Russian diplomats at the UN to keep the aid — and to make sure Moscow doesn’t use it as a bargaining chip with other countries to gain influence in Ukraine.

Mark Cutts, the UN’s aid coordinator for Syria, said the humanitarian relief operation was the largest in the world, with more than 56,000 truckloads of life-saving supplies delivered since 2014. As many as four million people are living in Syria — including an estimated 1.7 million living in Syria. tents – receive supplies to be delivered to Idlib, the last major rebel enclave in Syria and an area that has also become a haven for extremists linked to al-Qaeda.

“No one should live in tents for more than ten years,” said Mr Cutts. “And we’re already not providing the help that’s needed.”

Mrs. Thomas-Greenfield said it more bluntly. Without the help, she said, “babies will die.”

On the Turkish side of the border, known as Point Zero, Hatay’s deputy governor Orhan Akturk said the amount of aid seemed lower than in the past. The UN mission “needs to be extended,” he said. “That’s important, given the alternative.”

The United States and Turkey, both members of NATO, have formed an uneasy alliance over the past decade, while Erdogan has tried to stifle political opposition and freedom of expression, leading him to be condemned by the Americans. The belief among many Turks that the United States played a shadowy role in the failed coup attempt against Erdogan in 2016 fueled tensions.

Understanding the Civil War in Syria

An enduring conflict. The Syrian war began 11 years ago with a peaceful uprising against the government and culminated in a multi-faceted conflict involving armed rebels, jihadists and others. Here’s what you need to know:

The origin. The conflict began in 2011 when Syrians peacefully revolted against the government of President Bashar al-Assad. The protests were violently crushed as communities took up arms to defend themselves. A civil war ensued.

Both countries oppose Mr al-Assad’s hold on power but are bitterly divided over Kurdish fighters in northern Syria. Turkey considers them terrorists, but the United States sees them as partners who helped fight back the Islamic State.

More recently, Mr Erdogan has blocked Sweden and Finland from joining NATO, in line with Russia’s opposition to expanding the military alliance.

Ms Thomas-Greenfield spoke on Thursday with Sedat Onal, a Turkish deputy foreign minister. A description of the conversation, released by her office, said the two agreed on the importance of flowing UN aid to Syria. It also noted US opposition to the forthcoming Turkish offensive against the Syrian Kurds.

Human rights defenders have accused Erdogan for years of deporting refugees, in violation of international law, and moving them to areas in Syria near the border where Turkish forces have expelled Kurdish fighters.

In an interview later Thursday, Ms Thomas Greenfield said it was “wishful and hopeful thinking” for Turkey to try to justify the return of refugees to so-called safe zones where many of the Syrians have never lived.

She added: “Refugees will determine if it is safe for them to go back.”

The Erdogan government has already started building an estimated 100,000 brick houses in Idlib for the returning refugees and other Syrians in a process that Turkish Interior Minister Suleyman Soylu said on a voluntary basis on Wednesday. Erdogan has also pledged to build schools and hospitals in Syria to entice refugees to return voluntarily.

“We are not going to leave humanity alone. We are not going to turn our backs on our neighbors,” Mr Soylu said in Ankara, the Turkish capital, on Wednesday. But, he said, “we know it is not possible for us to carry another wave of migration,” and he accused Western governments of failing to provide solutions.

In Hatay, 67-year-old Mohammed Faisal said he could not return to Syria.

He survived 15 years in prison for speaking out against the Syrian government and another four years of civil war before escaping to Turkey in 2015, where he feels safe.

People still living in Syria are “in a very difficult situation,” said the man, who declined to be identified by his full name for fear of reprisals.

Without international aid, he said, “you can consider these people dead.”