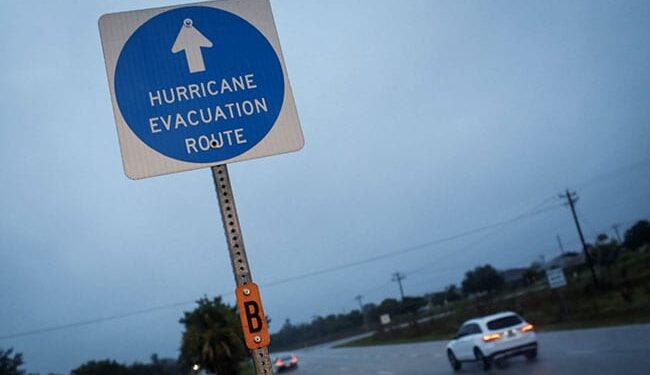 Hurricane Ian rose to catastrophic Category 5 strength on Wednesday as heavy winds began to batter the US state of Florida, with forecasters warning of life-threatening storm surges after millions of people were left without power in Cuba.

Mandatory evacuation orders had been issued in a dozen coastal Florida counties, with voluntary evacuations recommended in several others, according to state emergency officials as they gird themselves for a potentially historic storm.

In a pre-dawn advisory, the US National Hurricane Center (NHC) said “Ian has strengthened into an extremely dangerous Category 4 hurricane,” later warning of “catastrophic storm surge, winds and flooding.”

At 7:00 AM (1100 GMT), it said “data from a Hurricane Hunter aircraft indicates maximum sustained winds have increased to nearly 155 miles (250 kilometers) per hour” – just below Category 5, the strongest category on the Saffir -Simpson scale.

“This is going to be a bad, bad day, two days,” Governor Ron DeSantis said Wednesday, warning residents of a “rough stretch” for Florida.

“It could make landfall as a Category 5, but it’s clear that this is a very powerful major hurricane that will have major impacts both in southwestern Florida, but as it continues to work through the state.”

Tropical storm winds were already pounding the Florida Keys as the storm was expected to make landfall later Wednesday near Fort Myers and Port Charlotte, along the state’s west coast, before moving through central Florida and into the Atlantic late Thursday. Ocean would emerge.

With up to two feet (61 centimeters) of rain expected to fall on parts of the so-called Sunshine State, and storm surge that could reach devastating levels of 12 to 16 feet (3.6 to 4.9 meters) above the ground, warnings the authorities of catastrophic circumstances.

“This is a life-threatening situation,” the NHC warned.

DeSantis said Tuesday evening that there were already at least two “radar-indicated tornadoes” in the state, warning those in areas expected to be hardest hit that their “time to evacuate is coming to an end.”

Calls to heed the evacuation warnings were echoed by US President Joe Biden, who previously said Ian could be “a very serious hurricane, life-threatening and devastating in its impact.”

Widespread power outage
Ian plunged all of Cuba into darkness on Tuesday after slamming the west of the country as a Category 3 for more than five hours before returning over the Gulf of Mexico, the Insmet Meteorological Institute said.

Only the few people with gasoline generators had access to electricity on the island of more than 11 million people. Others had to make do at home with flashlights or candles and lit their way with cell phones as they walked the streets.

“Devastation and devastation. These are terrifying hours. There is nothing left of this,” a 70-year-old resident of the city said in a social media post by his journalist son, Lazaro Manuel Alonso.

About 40,000 people were evacuated in Pinar del Rio province, which was most affected by the storm, local authorities said.

In Consolacion del Sur, southwest of Havana, 65-year-old Caridad Fernandez said her roof was badly damaged and water was coming through her front door.

“Everything we have is damaged,” she said. “But we’ll get through this, we’ll just keep going.”

‘Life and death’
In the US, the Pentagon said 3,200 National Guardsmen had been called up in Florida, with another 1,800 on the way.

NASA, on the state’s east coast, also took precautions, rolling its massive moon rocket back into a storage hanger for protection.

Like DeSantis, FEMA administrator Deanne Criswell emphasized the danger of a storm surge and said it was the agency’s “greatest concern.”

“If people are told to evacuate by their local officials, listen to them. The decision you make could be the difference between life and death,” she said.