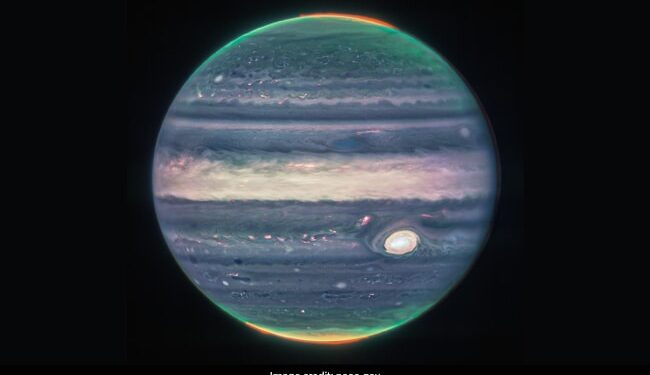 The new image of Jupiter captured by the James Webb telescope.

NASA’s powerful new James Webb Space Telescope has captured images of Jupiter that show the gas giant in great detail. The agency said in a blog post about the images that they will provide scientists with even more clues about Jupiter’s inner life. The footage was captured on July 27 and has been digitally enhanced and artificially colored to make specific features stand out. They show some ornamental designs around the Great Red Spot and offer an unprecedented view of the auroras over Jupiter’s north and south poles.

“To be honest, we didn’t really expect it to be this good,” planetary astronomer Imke de Pater, professor emerita at the University of California, Berkeley, is quoted by NASA in its blog.

“It’s really remarkable that we can see details on Jupiter along with its rings, small satellites and even galaxies in one image,” she added.

The latest images were taken by the James Webb Observatory’s Near-Infrared Camera (NIRCam), which has three specialized infrared filters that show details of the planet. 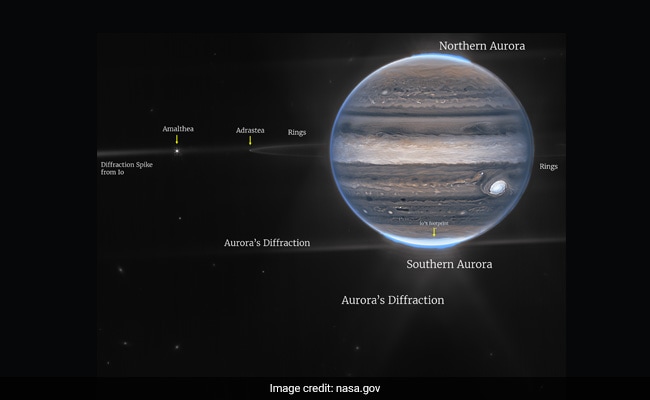 About the auroras, NASA said they extend to great heights above both the northern and southern poles of Jupiter. “The auroras shine in a filter mapped to redder colors, which also emphasizes light reflected from lower clouds and upper nebulae. Another filter, mapped to yellow and green, shows nebulae swirling around the northern and southern poles. third filter, assigned to blues, shows light reflected from a deeper main cloud.”

A wide-angle view shows a unique lineup of the planet, its faint rings and two of Jupiter’s smaller moons — Amalthea and Adrastea — against a backdrop of galaxies, NASA said. The faint spots in the lower background are likely galaxies that “photobomb” this Jovian view, it added.

The Webb telescope was launched from French Guiana atop an Ariane 5 rocket on Christmas Day in 2021.