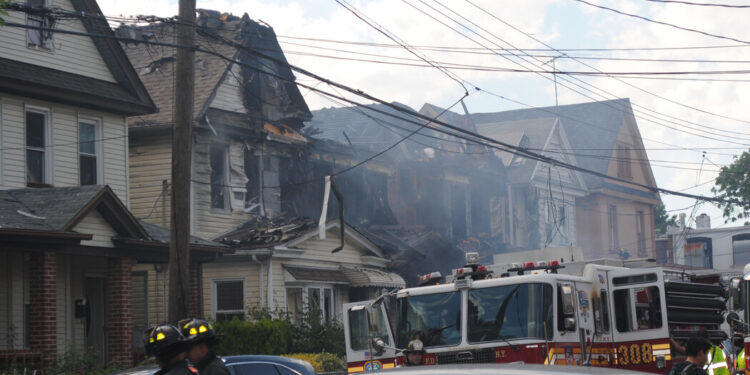 At least three people were found dead in a basement after a fire, caused by high winds, swept through several homes in the Richmond Hill section of Queens on Friday, fire officials said.

The home where the bodies were found, 104-18 125th Street, was subpoenaed in 2011 for, among other charges, illegal basement charges, and in 2017, inspectors responding to a complaint about an illegal basement residence reported that a man had refused to let them enter. from the Department of Buildings data.

On Saturday, fire officials were still trying to determine the cause of the fire, which was first reported at 104-19 125th Street. The fire engulfed that house and neighboring home, 104-18, with much of their superstructure collapsing.

Two of the bodies were found Friday and the third on Saturday, a fire department spokesman said. Police declined to identify the dead pending formal notification from relatives.

Amid a long-standing shortage of affordable housing, the city is struggling to make progress on the problem of illegal basement housing — which former mayor Bill de Blasio estimated last year was the number of 50,000 illegal homes housing more than 100,000 people. .

Eleven people drowned in basements last year in flash floods after Hurricane Ida, highlighting the problem’s high stakes — and its urgency, as climate change is expected to lead to more frequent and intense flooding, as well as more of the high winds. that played a role in Friday’s fire, according to the fire service.

Harrideo Parmand, who is listed in city records as the owner of the home at 104-18 125th Street, was not immediately available for comment Saturday.

City records show several outstanding violations at the address, including for failing to comply with an order to vacate the basement apartment and for modifying the residence to accommodate more than the legal number of residences.

Firefighters continued to search the rubble on 125th Street near Liberty Avenue on Saturday, where the blaze broke out. The five-alarm fire created a gray cloud of smoke that destroyed two homes, damaged three others and displaced dozens of residents.

The fire hit the bustling, tight-knit neighborhood known as Little Guyana, on the southern edge of the Richmond Hill section. At least 29 adults and 13 children have been helped in the aftermath of the fire, according to the American Red Cross, which provides aid. Five firefighters were slightly injured.

Building managers were also on site. The Ministry of Buildings did not immediately respond to requests for comment on Saturday.