‘At their breaking point’: Tenants are fighting to stay in their homes 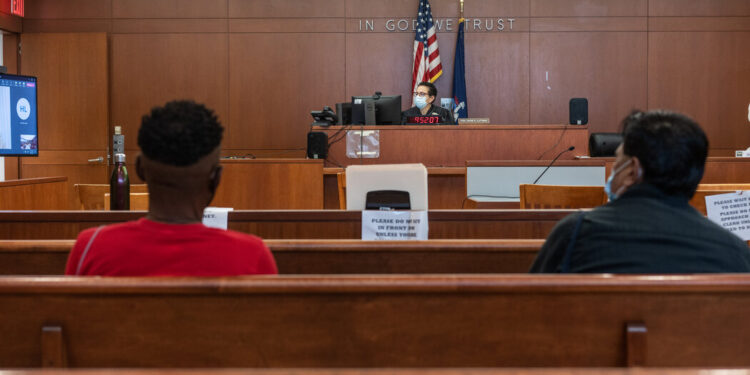 Rocio Quero Yescas is 56 years old and walks with a cane, and she is afraid she will trip and fall because the floor tiles in her apartment keep coming loose.

Kenya Whitt, a former psychiatric nurse, has been unable to pay rent since she was attacked by a patient and suffered a traumatic brain injury.

Julio Rodriguez and his 81-year-old mother have been battling noisy neighbors for months and want to force the landlord into action.

Each ended up in the Bronx housing court in early June, seeking answers through a Byzantine maze of paperwork, negotiations and hearings.

In 2019, the year before the pandemic closed the courts, more than 171,500 eviction requests were filed in the New York housing court. Now the courthouses are starting to wake up again, shake off pandemic restrictions and resume personal appearances. The corridors are starting to fill up again with tenants, landlords and their lawyers. More than a third of all new eviction cases are in the Bronx.

The resumption of eviction cases comes at a time when New Yorkers are under pressure from rising inflation and record high rents. On Tuesday, a regulatory panel approved a 3.25 percent increase for one-year leases for rent-stabilized homes, a move that will affect about two million city residents.

Each morning, a line forms in front of Bronx Housing Court as anxious tenants wait under the scaffolding that now covers part of the front of the building as work is done to repair a leaking roof. Most mornings, the line stretches out onto the sidewalk, where a food truck sells egg sandwiches and hot coffee to those who skipped breakfast to arrive early.

Inside the courthouse it’s not like it used to be, observers say. Before the pandemic, the hallways and courtrooms were teeming with lawyers and tenants. One recent day, an eerie silence hid a tension that simmered beneath the proceedings. Financial aid for renters is declining as pandemic emergency response programs run out of money. And since the state’s eviction moratorium ended in January, New York housing court files have soared.

The number of eviction cases is still well below prepandemic levels, and court officials say they are trying to keep the case from becoming overwhelming by clearing the backlog.

“It’s so dramatically lower than it was prepandemic,” said Jean T. Schneider, the supervising judge for the New York City Housing Court. “There just isn’t an explosion of sign-ups.”

But for tenants threatened with eviction, the first trip to the courthouse can be daunting. Some tenants are ushered upstairs for their court hearing, while others are sent to the information desk on the first floor, where they can get paperwork, file grievances, and even make delinquent payments.

On a recent Monday, Michelle Patterson-Gay waited to file a complaint against her landlord, who is trying to evict her. She lives in the Soundview neighborhood with her 17-year-old daughter Essence, who has a learning disability, and says she had an agreement to move in March 2020, but her landlord continued to cash her rent checks, voiding the deal.

Now, Ms Gay said, her landlord has harassed her and blocked access to her apartment, for which she pays about $1,200 a month. Until she finds a lawyer, she is willing to fight alone. “I have a child with special needs and I can’t live like this,” she said.

The dam will burst, said Raven S. Dorantes, an attorney for the Urban Justice Center’s Safety Net Project. It’s only a matter of time.

“You’ll see a lot more people at their breaking point,” she said.

Upstairs at Bronx Housing Court, a large courtroom on the second floor has been converted into an intake room where tenants can apply for legal aid, look up cases and file their own paperwork. Two stations will be set up for tenants who can only appear virtually, but have no computer or WiFi access and therefore have to appear in person.

Miriam Maldonado, who wanted repairs made to her apartment, sat in front of a large monitor for 20 minutes hoping to contact a lawyer, only to be told she was there on the wrong day. Another tenant, Nector Caro, showed up for a virtual meeting with a representative from Mobilization for Justice, a legal services firm in the Bronx, who said the agency could no longer handle cases but would contact him by phone and provide free legal advice. would offer.

In the hallway, a long table served as a makeshift help desk, with a desktop computer on one side and a bilingual clerk on the other.

Julio Rodriguez waited there with his mother, Ligia. After years of substance abuse, mental health problems, homelessness and bad credit, Mr. Rodriguez found a landlord who was willing to give him a shot at an apartment in Morris Park for $1,950 a month. But shortly after moving in, the upstairs neighbors started making “a ridiculous noise”.

“We didn’t really want to complain about anything because we were just lucky to be there,” said Mr. Rodriguez. But, he added, “my quality of life was deteriorating at a rapid rate.”

Because of a previous eviction, he said he didn’t want to move. So he came to court to force his landlord into action. “He’s just waiting for me to get tired of it and move,” he said, “and I’m not in a position to do that because of the headache I went through getting this place.”

The helpdesk is also available for landlords. Marco Villegas, who owns nine buildings in the Bronx, mostly in the Morrisania neighborhood, sat on a bench with his daughter hoping to resolve a problem with a tenant over non-payment of rent.

“This is my first time back in the courthouse after Covid,” he said. “I don’t know if the calm is a reflection of real life or just a shift in how the process is done.”

Mr Villegas said he saw his tenants as his greatest asset; without them he wouldn’t be able to pay his bills. He prefers a community-based approach, where landlords build relationships with their tenants. For him, an eviction notice is a last resort.

And a legal battle can be costly. He said the upfront cost was $2,500 to file the paperwork and get two court hearings. To complete an apartment, including repairs and finding a new tenant, the cost can run as high as $30,000, he said.

Mr Villegas, who rents out a total of 30 units, is frustrated that he believes the housing court is targeting larger landlords who have money and connections. “My access to resources is very different,” he said.

Even landlords with more units find evictions a hassle. Lawsuits are also time-consuming and expensive for them, said Lisa Gomez, the chief executive of L&M Development Partners, which manages about 20,000 affordable homes in New York. “There is no benefit to going to court,” she said.

Some of the largest landlords of affordable housing in New York say they prefer to avoid lawsuits altogether. The pandemic has given them time to rethink their relationships with their tenants, said Adam Weinstein, the CEO of Phipps Houses.

To help alleviate an impending blockade in the courts, Phipps has withdrawn half of his pending cases. “It’s not just a responsibility, it’s in the interest of the landlords,” he said. “An eviction is just a vacancy, and a vacancy is a loss.”

The New York City Housing Authority, which hosts 11 percent of the city’s population, is also rethinking its approach, said Lisa Bova-Hiatt, general counsel at NYCHA. management, working with tenants before a problem turns into a crisis.

“We’ve decided there must be a better way to do this,” she said. “We need to do better to keep people housed.”

Housing attorneys embrace this approach. “Ideally, yes, we would all work together before anyone gets caught up in the justice system,” said Runa Rajagopal, general manager of the civil litigation practice at the Bronx Defenders, a public defender.

Despite efforts to prevent a deluge of eviction applications, tens of thousands of New Yorkers are facing eviction: According to Princeton’s Eviction Lab, 121,473 new cases have been filed in New York’s housing courts as of March 15, 2020. More than a third of those deposits — 41,988 — are in the Bronx alone.

Often times, eviction struggles arise because of issues beyond a tenant’s control, such as a simple paper error or job loss.

On the fifth floor of the Bronx Housing Court, Ms Dorantes of the Urban Justice Center represented Kenya Whitt, a tenant who has not worked since she was knocked unconscious by a patient at Long Island Jewish Medical Center, where she was a nurse.

Because she has no job, Mrs. Whitt, 46, has been unable to pay the rent on her University Heights apartment. However, her landlord claims that she receives income and demands a backlog.

“This is my first time in court, and I don’t know how things work,” she said as she watched Ms Dorantes go into the courtroom to appear in court.

Mrs. Dorantes reappeared a few minutes later; the case has been adjourned to July 20.

“We can’t help people fast enough,” she said. “Renters fall through the basket.”

That day, drilling on the roof over Judge Diane E. Lutwak’s courtroom drove people into the hallway, where they lingered and waited for escort.

Among them was Rocio Quero Yescas, who sat with her 26-year-old daughter, Stephane Martinez-Quero, while their attorney met Judge Lutwak. They were trying to resolve a dispute with their landlord about the floor in their Jerome Park apartment, for which they pay $1,173 a month.

Her mother noticed the smell first, Ms. Martinez-Quero said. “She thought it was mold, but it was the wood that was rotting.” A leaking radiator had damaged the wooden floor and now the tiles on it were peeling.

However, several attempts by the landlord to resolve the issue were unsuccessful, so Ms. Quero Yescas filed a complaint with the city. In response, her daughter said, the landlord is trying to evict them.

A social worker at Part of the Solution, an emergency services provider in the Bronx, referred them to Elizabeth Maris, a supervising attorney at the agency.

“Landlords often try to fix things cheaply,” Ms Maris said. Through an interpreter she explained to Mrs Quero Yescas and her daughter how the conversation with the judge went. “We have asked for an extension to give the landlord time to make repairs. Hopefully they will withdraw their case.”

Tomorrow there will be another wave of renters seeking help, and proponents say they will do what they can despite the increased tax burden.

“The right to advice was this great thing the city decided to do; it could be a great model for others across the country,” said Donna Dougherty, senior director of legal services for the elderly at JASA, a service for older New Yorkers. “If we fail because of the pandemic, it will be tragic.”