Chair Stalking Returns To Bryant Park As Midtown Lives Up 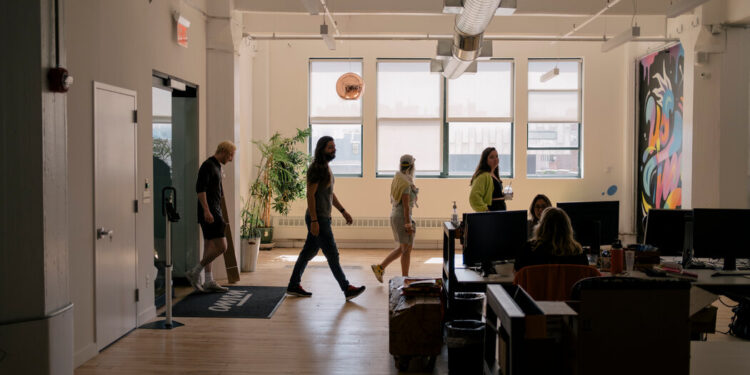 Good morning. It is Friday. Today we’ll look at the unevenness of RTO – return to office – and what it means for New York†

So many things seemed patchy during the pandemic.

Now there is a well-known fragmentation in return to office scenarios, which vary from company to company. Bosses’ expectations about when employees should return — and how many days a week — can vary even within companies, leaving many offices empty.

Office occupancy across the country stabilized at about 43 percent last month, according to data from security firm Kastle. But in Manhattan, just 8 percent of office workers were back at their desks five days a week, the Partnership for New York City, a business advocacy group, said last month.

In Manhattan, there are actually fewer desks to sit at. Some companies have moved their offices closer to where their employees live. My colleague Matthew Haag wrote that the intention was to get back to work by shortening the journey. Before the pandemic, workers in New York City had to travel an average of 38 minutes — the longest anywhere in the country. And that was only one way.

Before the pandemic, Manhattan’s office buildings supported a web of coffee shops, restaurants, and retail stores in Midtown and the Financial District. Many closed after the daily bustle of the office had dwindled to almost nothing. Rent signs are still in many store windows, and 19 percent of Manhattan’s office space is available, the equivalent of 30 Empire State Buildings. That’s more than 12 percent before the pandemic, according to real estate company Newmark.

Daniel Ismail, the head office analyst at Green Street, a commercial real estate research firm, told Matthew he expects the office market to deteriorate before it gets better as leases signed years ago expire. He said many businesses no longer need the space they have, while others have moved to buildings with better amenities, including better access to public transportation.

Is Midtown’s recovery not affected by return to work plans, which many companies have postponed, and hybrid schedules, which many have adopted? How many office workers go to the office?

Yes, Midtown is still the central office. The latest survey from the Partnership for New York City found that only 38 percent of Manhattan’s one million office workers were back at their workplaces by mid-April.

Many business leaders had expected this figure to be higher this summer, but many companies (including ours) have once again rescheduled plans to return to work due to rising virus rates.

That’s why I was surprised to see so many people in Midtown. It seems that the office workers who are back are picking up their prepandemic routines. In Times Square, the new Margaritaville hotel hosted more than 30 corporate events last month and expects to get even busier this month.

You wrote that people are chair-stalking again in Bryant Park. What is that anyway?

It’s one of those essential urban skills if you want to sit and eat. You circle the park with your takeout, looking for people taking their last bite of lunch. You float nearby so you can grab their seat or table as soon as they get up. But you try not to seem too pushy or rude or desperate.

Before the pandemic, you had to sit on the chair on hot sunny days when it seemed like everyone was in the park. It is now even more essential as there are fewer seats than before. The park has not replenished its seat stock during the pandemic. When there were more chairs than people, there was no need. That has now changed. The lunch crowd reached 3,500 people a day in May, or about 83 percent of what it was in 2019.

Foreign tourists were vital to the Midtown economy before the pandemic. What about now?

There are more foreign tourists than a year ago – you can tell by all the different languages ​​you hear when you walk around.

About eight million foreign visitors are expected to visit the city this year, according to the city’s tourism board, or nearly triple the 2.7 million who came last year. But that is still a long way from the 13.5 million visitors in 2019.

Domestic tourists have returned much faster, but foreign tourists are still crucial. Many have stayed away due to a federal testing requirement for a negative Covid test the day before boarding a plane to the United States. Until that changes, we may not see many foreign tourists.

We can’t talk about Midtown without talking about traffic.

There are many reasons why the stalemate is back. Transit drivers switched to driving during the pandemic. Car ownership increased throughout the city. Deliveries have skyrocketed and construction is booming. More people than ever are using the streets for cycling, dining and socializing.

Do some people find it difficult to adapt to the crowds?

Yes, many New Yorkers – myself included – enjoyed more space in the busiest part of town. Rochel Pinder told me she’d gotten used to walking without being boxed in on the sidewalk and being able to pick seats in Bryant Park. She is a school administrator who commutes from Queens to Midtown.

She told me she feels overwhelmed now. “There are just so many people,” she said. “Personally, I prefer to have the space to myself to enjoy. But I think it’s a good thing for New York City.”

Enjoy a sunny day near low 80s New York. The evening is usually clear with temperatures dropping around the mid-60s.

A friend and I had plans for a jazz night in SoHo, and we decided to grab a quick drink beforehand at a wine bar. It was a pretty intimate place, and a few minutes after we were seated I noticed how cute the bartender was – maybe a little younger than me, but very much my type.

I’d been trying to get more out and about lately, so as my friend and I were getting ready to leave, I decided to give the bartender my number.

I searched my bag for a pen and a piece of paper and found neither. So I resorted to eyeliner pencil and a McNally Jackson bookmark. After writing down my number, I bookmarked my new crush when he walked by.

He quickly said he had a girlfriend and my face turned impressively red.

A short time later I read my book on my commute, fortunate to have found a seat by the door.

As the train pulled into Canal Street, the page I was reading suddenly went dark. A man on his way out had tucked a folded piece of paper into the spine of my book and had disappeared into the bustling crowd before I could respond.

Surprised, I unfolded the paper to find a name and number.