Eli N. Evans, who wrote about Jews in the American South, dies aged 85 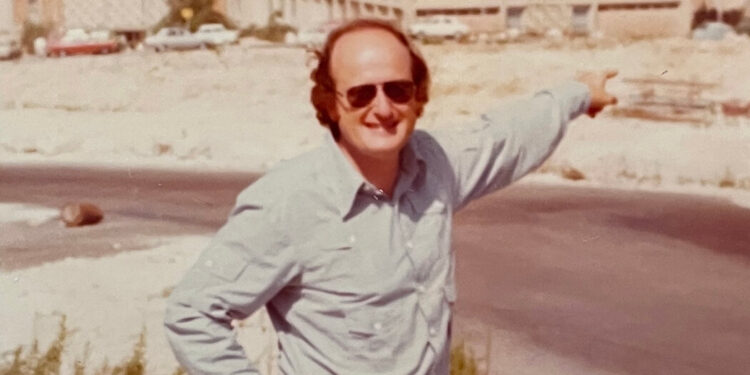 Eli N. Evans, a courtly Carolina Tarheel who rose to the higher ranks of the New York philanthropic world but left his greatest mark as the author of three books on the culture and history of Jews in the American South, including his own family , died July 26 in Manhattan. He was 85.

The death, in a hospital, was confirmed by his son and sole survivor, Joshua Evans, who said the cause was complications from Covid-19.

With a law degree from Yale and a stint as a White House speechwriter, Mr. Evans was part of a cohort of erudite Southern expatriates who landed on the Manhattan literary scene in the 1950s and 1960s—many of whom, including Willie Morris, the Mississippi-born editor of Harper’s Magazine, became close friends of his.

Like them, Mr. Evans, who worked at the Carnegie Corporation before becoming president of the philanthropic Charles H. Revson Foundation, intertwined his cosmopolitan worldview with its Southern roots. He could easily move between diplomats and tycoons, but he also loved playing banjo and unwinding stories of growing up among the tobacco fields around Durham, NC

It was those stories, often told during long Sunday brunches, that Mr. Morris led Mr. Evans to write about Southern Jews, and in particular his family of peddlers, merchants and politicians in North Carolina.

The commission became a book, “The Provincials: A Personal History of the Jews of the South.” It was published in 1971 and sparked a wave of interest in a culture that many people outside the region never knew existed.

In fact, as Mr. Evans noted, until the early 1800s, more Jews arrived in port cities such as Savannah, Georgia, and Charleston, SC, than in cities north of the Mason-Dixon Line. Thousands more came south by land, often as factory workers or peddlers, such as the Evanses and the Nachamsons, his paternal and maternal ancestors.

Mr. Evans was not the first person to study Southern Jews; scholars, rabbis, and historical societies had long documented various local communities. But “The Provincials” was the first attempt at telling a synthesized regional history to a wider audience.

“I’m one of those people who, when they read ‘Provincials,’ for the first time felt a recognition,” Marcie Cohen Ferris, a professor of American studies at the University of North Carolina who grew up in Arkansas, said in an interview. “They had never reflected their experience of Jewish life in this way.”

Mr. Evans’s title was somewhat ironic: Jews in the South were only provincial in the eyes of their northern urban co-religionists. At home, by contrast, “Jews were not strangers in the Promised Land, but a blood-and-bones part of the South,” he wrote.

Evans was a gifted writer whose sentences resembled the lavish lyricism of other mid-century Southerners such as James Agee and Reynolds Price. But he focused those sentences on a culture that had hitherto been the domain of Northern Jewish writers such as Bernard Malamud and Saul Bellow.

“Eli really showed the way; he opened the door for a new generation of Southern Jewish writers,” Roy Hoffman, a novelist living in Mobile, Ala, said in an interview.

“The Provincials” intersperses Mr. Evans’ personal account of growing up as the son of a prominent Durham businessman—who was also the city’s first Jewish mayor—with chapters grappling with anti-Semitism, the fear of assimilation and the role of Jews in the Civil Rights Movement.

The book revels in the confluences, ironies, overlaps and buried stories of the Jewish South. Ham can be served with a Sabbath meal. Christian parents brought their small children to Mr. Evans’ father’s shop to be blessed in Hebrew. He joked that no one had to open the door for Elijah on Passover because it was so hot that all the doors were already ajar.

“I’m not sure what it means to be both a Jew and a Southerner,” he concluded, “to have inherited the Jewish desire for a homeland while growing up with the Southerner’s sense of home.”

He followed “The Provincials” with two more well-received books: a 1987 biography of Judah P. Benjamin, the slave-owning Jewish politician who served as Secretary of State for the Confederacy, and “The Lonely Days Were Sundays: Reflections of a Jewish Southerner” ( 1993), a collection of essays.

He also became a strong supporter of efforts to build on his own work. He helped found the Carolina Center for Jewish Studies at the University of North Carolina; he spoke on panels; and he wrote chapters, introductions, and blurbs for countless books that followed his own.

“He was sort of a patron saint of Southern Jewish history,” said Shari Rabin, an associate professor of Jewish studies and religion at Oberlin College in Ohio who writes a history of Jews in the South.

What Mr. Evans especially wanted was to complicate easy assumptions about his people and his region, to show that Jews were a distinctive but central part of the Southern story.

“The history of Jews in the South does not lie in the cross-burnings of the Ku Klux Klan, the bombings, the acts of overt anti-Semitism,” he wrote in “The Provincials.” “It is found in the experience of Jewish growing up in the Bible Belt, the inner story reflected in family histories and stories and letters home.”

Eli Nachamson Evans was born on July 28, 1936 in Durham, NC. According to his son, according to family lore, Evans was an Anglicized version of Eban, the Hebrew word for stonemason. (Coincidentally, Mr. Evans was good friends with Israeli diplomat Abba Eban, although they were not related.)

Evans’ paternal grandfather, Issac, was born in what is now Lithuania, and later worked in the New York clothing district. Saving enough money to buy a pack of wares, he went south as a peddler. As the family story goes, he arrived by train in Fayetteville, NC, where he saw a building in flames. He got out to help fight it and in the meantime the train left.

Stranded, he set up shop as a merchant, a trade followed by his sons Monroe and Emmanuel, Mr. Evans’ father. Emmanuel Evans, known in town as Mutt, was a star athlete at the University of North Carolina; founded Evans United Dollar, a chain of discount stores; and served as mayor of Durham from 1951 to 1963. (Monroe Evans was mayor of Fayetteville in the 1960s.)

Evans’ maternal grandmother, Jennie Nachamson, founded the first chapter of Hadassah in the South, the Jewish Women’s Organization. His mother, Sara (Nachamson) Evans, expanded that commitment as a regional and national organizer; he called her “Hadassah’s southern accent.”

Mr. Evans excelled at the University of North Carolina, where he was the first Jewish student union president and spent a summer on a kibbutz in Israel. He graduated with a degree in English Literature in 1958. After two years in the Navy, he attended Yale Law School, graduating in 1963.

He spent a year as a speechwriter at the White House and another year as an assistant to the liberal governor of North Carolina, Terry Sanford, before moving to New York to join the Carnegie Corporation.

There he led efforts to promote voting rights in the South, as well as grants to public television – he was an early proponent of “Sesame Street.”

In 1977 he became chairman of the Revson Foundation, where he continued his involvement in television, providing critical funding for programs such as “Heritage: Civilization and the Jews” and “Genesis: A Living Conversation”, and he was inspired by the Oslo- 1993 accords in support of “Rechov Sumsum”, an Israeli version of “Sesame Street”.

In Manhattan, he met another Southern Jewish transplant, Judith London, who had grown up in an Orthodox family in Montgomery, Ala. They married in 1981; she died in 2008.

Although Mr Evans never lived in the South after the 1960s, he visited often and continued to feel a deep connection to his home region. When his son was born in a Manhattan hospital, Mr. Evans took a bottle of Carolina dirt with him.

“With one hand I held Judith’s hand and with the other I gripped the southern soil,” he wrote in “The Lonely Days Were Sundays.” “I wanted him to know his roots, and I believe you had to create family legends early on.”

A few years later, when his mother died, he had a cherry tree planted outside a Hadassah-sponsored hospital in Jerusalem. Under that went that same bottle of Carolina dirt.