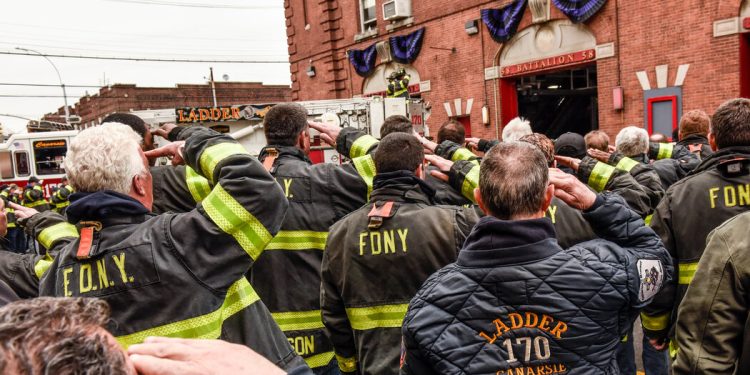 Timmy Klein, a lanky, boyish firefighter, had only been on the job for three years in January 2019, but he had taken on a solemn duty. His comrade on Ladder 170 in Canarsie, Steven Pollard, had died on the job. Mr. Klein told his crew that he wanted to write the eulogy.

Mr. Klein wrote and rewrote as he entered the fire station on his days off to confer with his lieutenant. Nervously, on the day of Mr. Pollard’s funeral, Mr. Klein walked up to the altar, crossed himself, turned to the lectern, and began to speak.

“I was with Steve the night he died,” he said, choking as the crowd cried in the shrine. “Steven Pollard died not thinking about himself but trying to help others. We’ve lost a real hero.”

Three years later, on a bluebird spring day in Brooklyn, Mr. Klein himself joined that stark roster. He was killed Sunday in a fiery ceiling collapse at a house in Canarsie. A 21-year-old man was also killed in the fire.

mr. Klein was the 1157th member of the fire service to die on the job, and the fifth from Ladder 170. His funeral will be Friday.

“He was everyone’s go-to guy,” said Lieutenant John Vaeth, who spent the first three years in the department with Mr. Klein on Ladder 170. “If something had to be done and you knew it had to be done, it was Timmy.”

Known as ‘the golden child’ or ‘the Canarsie child’, Mr. Klein’s place on Ladder 170 was the realization of a lifelong dream. The son of a Brooklyn firefighter, Mr. Klein, had grown up in the tradition of the department, surrounded by uncles and cousins ​​who would eventually join the fire service as well.

“Timmy understood the risks. We all do, we grow up with a family of firefighters,” said Keith Klein, a cousin and fellow firefighter from New York City, who spoke as black-and-purple flags were draped across the front of Timmy Klein’s fire station Monday.

As far as luck can go in firefighting, Mr. Klein seemed to have it. For firefighters on trial, real fires — or “work,” in department parlance — can be elusive. But Mr. Klein soon became known as a “black cloud”; Flames seemed to follow him every time he turned a shift. He grew into a skilled and talented firefighter.

“He was very good at a fire,” said Lieutenant Bob Kittelberger, who was Mr. Klein’s lieutenant on Ladder 170 throughout his six-year career.

Fellow firefighters and bosses recall that Mr. Klein was constantly drilling and taking jobs as large as removing roofs from burning houses and as small as cleaning masks at the fire station. In the notoriously rough world of the fire station, colleagues teased him with overly reverent praise: “You’re too perfect.”

“We’d give him a compliment. That was our way of getting him,” said James Kennedy, a fellow firefighter at Ladder 170.

On his days off, Mr. Small volunteer work at “Fight for Firefighters,” a nonprofit that remodels first responders’ homes to make them more accessible to people with disabilities. The week before he was killed, Mr. Klein in installing a wheelchair lift at a retired firefighter’s home on Staten Island, said Lieutenant Vaeth, who helps run the organization.

In the days after his death, Mr. Kennedy, was Mr. Felt Klein’s absence when colleagues discovered gaps they never realized he had filled. Each summer, Mr. Klein, who was unmarried, vacationed with colleagues in the Outer Banks of North Carolina, where he bonded with their children. They learned that every week Mr. Klein had called the widow of a retired firefighter from Ladder 170 to check in. Each morning before his shift, Mr. Klein would stop at a bakery to bring breakfast for his crew—and put pastries at his grandmother’s. en route.

The chaos of planning a funeral has cruelly underscored the absences.

‘I find myself taking my phone, and who are you calling? You always call Timmy. We’re now learning how much he actually did because it’s just not done,” said Mr. Kennedy. ‘How come it wasn’t done? Well, Timmy used to do that too.’

With six years of service. Mr. Klein had started playing with the lieutenant’s exam. He had recently bought a house near his parents in Rockaway, Mr. Kennedy said, and was in a serious relationship that colleagues suspected was about to get married.

On Sunday, Mr. Klein was sent to the fire station’s adjacent engine company, Engine 257, when a call came in from Canarsie. Engine 257 arrived within minutes and Mr. Klein entered the house with four colleagues. Conditions “deteriorated rapidly,” the department said, and not long after the third alarm, a commander ordered Mr. Klein and his colleagues outside.

At the same time, the house partially collapsed. Firefighters jumped from the windows and others fought their way out through the structure itself. mr. Klein, trapped under the fallen ceiling, was seriously injured; eight other firefighters were injured, but all had to survive.

In the days since Mr. Klein has been chasing Lieutenant Kittelberger for one specific memory.

Lt. Kittelberger, choking his tears, told of a house fire with the crew of Ladder 170, in which Mr. Klein was assigned to the exterior vent, which was responsible for controlling airflow in the house by creating openings in windows and walls.

Lieutenant Kittelberger led the rest of the crew inside and soon realized that the flames were not on the main floor of the house, as expected, but were coming up through the basement and climbing quickly up the stairwell. He realized that the house had bars on the windows, putting Lieutenant Kittelberger and his crew in a dangerous position. Fearing they would get trapped, he radioed out and ordered someone frantically to remove the bars from the window in case the crew had to escape.

After the fire was brought under control, Lieutenant Kittleberger realized that Mr. Klein had made sure his colleagues always had a way out.

“There was no more window frame,” he said.