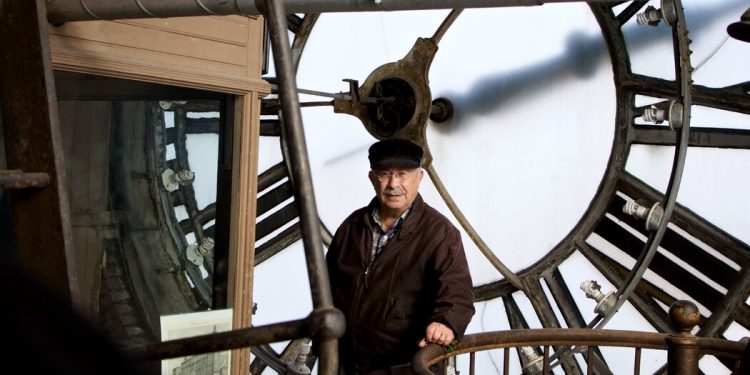 Good morning. It is Friday. We’ll take a look at how New York City’s clock master handles the transition to daylight saving time. We also look at a phone number made famous by a song in the big band era.

On the weekend, the rest of us will probably do what Marvin Schneider has already done: jump forward and complain.

We have our alarm clocks and microwaves. He has the clock in the town hall tower, which still runs with its ancient gears. He has the clock in Brooklyn Borough Hall that he once considered his worst enemy. He has the clock on the corner of 280 Broadway, a holdover from the days when it was the headquarters of the old New York Sun, not home to city agencies like the Department of Buildings.

He is the clock master of New York City. And he’s not happy about daylight saving time.

“It’s annoying,” he said. “And getting used to the change is an inconvenience.” He always needs a few days to adjust, he said.

He is not alone. “It’s a weekend that makes many of us unhappy,” Representative Frank Pallone Jr., a New Jersey Democrat and the chairman of the House Energy and Commerce Committee, said during a hearing Wednesday.

Pallone’s solution? Choose one or the other – daylight saving time or standard time – and stick to it all year round. He said he hadn’t decided which one he would prefer to make permanent.

“I believe that any justifications for jumping forward and backward are either outdated or do not outweigh the serious health and economic consequences that we now know are associated with the changes in time,” he said.

There are also more car accidents and missed medical appointments, according to the American Academy of Sleep Medicine, and heart attacks and strokes also increase in the days following the time change. “Disconcertingly,” Pallone said, “these strokes are even higher for some of our most vulnerable populations — cancer patients’ stroke rates are up 25 percent, and people over age 65 are 20 percent more likely to have a stroke in the days following surgery.” time change.”

In the digital age, there are fewer old-fashioned clocks like Schneider’s. A team of six once went to subway stations and reset every clock. But in 2018 there was only one analog clock left, a spokesperson said, and it has since been retired, leaving only digital clocks that don’t have hands that need to be turned back by hand.

Schneider, 82, a daily municipal worker who is paid about $40 an hour, once said he wished his clocks were accurate, but set them “to the nearest 10 seconds” with an Omega wristwatch.

He still controls the Omega. But now he also has a cell phone that he uses to get “very, very close.”

It is a mostly sunny day in the low 50s. Expect a chance of rain late at night, with temperatures dropping below 40 degrees.

On to the frontline in Ukraine

Some Ukrainians in New York are heeding President Volodymyr Zelensky’s call to join the fight against Russia. Ana Bogdanova, 37, a data scientist, trades the coffee shops and boutiques of Manhattan’s East Village for weapons training in her hometown of Ternopil.

“I can’t bear to hurt another living being,” said Bogdanova, who asked for identification with the equivalent of a middle name because her parents in Ukraine are not aware of her decision. “But in this case they are destroying, they are bombing every day. I will do what I have to do. I will take up arms – I will not hesitate.”

Yuriy Blazhkevych, 63, a taxi driver from Brighton Beach, Brooklyn, has spent more than $3,000 buying military equipment, including fatigues, a helmet and night goggles.

“I will do what they ask me to do,” he said, when asked about his plans once he registered in his hometown, Lviv. “I can drive trucks for them,” he said. “But I would ask to shoot.”

Unemployment in NYC soared in January

The unemployment rate in New York City was 7.6 percent in January, up from 7.4 percent in December, the Department of Labor said. The January figure reflected the Omicron peak, which peaked on January 10 with just over 40,000 new cases, about 87 times the 460 cases reported on March 7.

The department had originally reported the figure for December as 8.8 percent. My colleague Patrick McGeehan, who covers the New York economy for the Metro desk, told me that change went hand in hand with a revision of employment statistics that added about 100,000 jobs in the city.

That was an indication that the economy and recovery in New York at the end of 2021 were stronger than expected, but both weaker than in the rest of the country.

PEnnsylvania 6-5000 will not disconnect

It was made famous by a song from the big band era, “PEnnsylvania 6-5000.” It was a phone number—the Hotel Pennsylvania number across from Madison Square Garden. “The Encyclopedia of New York City” says it was the largest hotel in the world when it opened in 1919.

It closed two years ago — Vornado’s chairman Steven Roth said last year it was “decades past its glory and expiration date.” Recent reports of plans to replace it with a super-tall building known as Penn15 has led big band fans to wonder: What will happen to the phone number?

The song was a signature song for bandleader Glenn Miller, who and his orchestra were a mainstay at the hotel’s Café Rouge. “PEnnsylvania 6-5000” came out at a time when the first two digits of a phone number represented a switchboard name: PL for Plaza, RE for Regent, TR for Trafalgar.

“We will retain PEnnsylvania 6-5000,” Roth said in a footnote to Vornado’s 2021 annual report, adding that it was “the oldest continuously in use telephone number in New York.” He didn’t say who the callers would reach.

I was walking along Central Park near 59th Street. It was raining heavily and then it started to hail.

The sidewalk was empty. Cold rain seeped through my pants and hailstones jingled around me. I tried to increase my stride, leaning forward into the wind.

Suddenly a movement to the right made me turn my head. What I saw almost stopped me: a bird was walking parallel to me in the same direction a few meters away.

It was no ordinary city bird. It was a turkey and he was walking next to me in Central Park West.

I looked at my companion, but he paid no attention to me and walked on. The poor bird was soaked. Streams of water ran from his wickerwork. Hailstones bounced off his body with a muffled thud.

A wild thought occurred to me and I approached the bird with my umbrella outstretched. The turkey quickly changed course to walk behind the benches.

I raised my umbrella and shook my head. Stupid bird, I thought. I just wanted to share my meager lodgings. I laughed at the image.

The sound startled the bird and prompted it to move further away. We walked on side by side, the benches between us, until I had to cross at Columbus Circle.