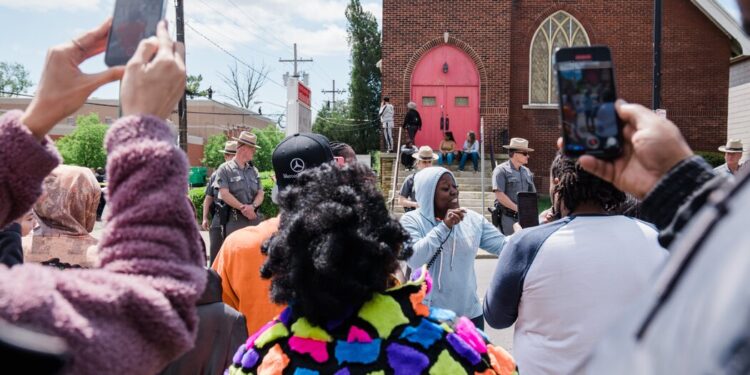 When President Biden delivered an emotional speech in Buffalo denouncing the attack that killed 10 people in a quiet neighborhood as a racist act of terrorism, many black residents in the area said the address would ultimately mean little without further action.

Mr Biden started his day with a visit to the Tops supermarket where the shooting took place, raising his right hand to his chest as he visited a large memorial near the store with the names of the dead. Jill Biden, the first lady, put a bouquet of flowers on the pile.

Later, in a speech at the Delavan-Grider Community Center on the city’s East Side, the president shared stories about the victims and called on the nation to reject racist ideologies.

But several residents of the area said they wished more was done to address the long-standing problems in their area.

“We want Biden to give the same support to Buffalo, on the East Side, as other communities. Ukraine will get that,” said Jamarius Cooper, who has lived near the Masten Park neighborhood for more than a decade.

Tim Lewis, 55, who grew up on the East Side and traveled to the community center so his children could see the area, said he hoped the president’s stance against racism would prove to be a long-term commitment.

But he was disappointed that officials did not greet residents outside after Mr Biden finished his formal speech.

“Of course the families feel the consequences of this,” he said. “But so are we. It’s kind of a slap in the face. He should have just come here and say a few words to give us hope.”

Earlier in the day, some residents struggled to catch a glimpse of Mr Biden as he approached the monument, while others grew increasingly frustrated with the spectacle it had created.

An hour before the president’s arrival, a crowd of about 150 residents had gathered in the area, standing in front of police barricades. A man standing on a nearby street shouted, “We don’t want him here.”

For Jamie Lash, 64, known to residents as “auntie” for her ubiquitous presence in the area, the visit was very meaningful.

“I just appreciate everyone coming to us,” said Ms. Lash. “Because this gives us a sense of direction and says we’re not alone. And that means so much.”

But many neighbors expressed their displeasure. Dinah Bishop, a nurse who works about a mile from the grocery store, said a speech would do little to destroy the longstanding racism in Buffalo.

Shaniah Paige, 39, who lives near the community center, said if it took lawmakers until this year to make lynching a federal crime, she didn’t believe a meaningful change would come soon.

“We’re upset. When we’re down, we get free food and photos,” she said. “But this is embedded in decades of laws: America is built on racism.”

For Michael Mostiller Jr., who lives two blocks from the supermarket in Tops with his wife Letitia, Mr. Biden’s visit was “exciting.” He watched as the president arrived and pulled out his phone to take a photo. Still, he said he didn’t know what could change.

“We are caught in a Catch-22 situation,” he said. “When it comes to gun rights, people want their guns. You have to protect yourself. But do you need powerful guns? As for chasing the social media, I don’t think that’s a good idea because of free speech. So I don’t know how they’re going to do it.”

Buffalo has endured extreme segregation for decades, and the city’s black residents have long said they fare worse than their white counterparts in many areas of daily life.

Some residents, such as Daniel Love, 24, who works at a barbershop across the street from Tops, said the East Side had long deserved more attention and that the visit “should have happened a long time ago.”

Others said they were concerned whether the area would receive the same attention after the visit was over and the next tragedy occurred.

“I don’t care what Biden said, I want to see action,” said Toni Arrington, 27, a hairdresser standing outside the community center where Mr Biden spoke. “I want to see our community get real help. I want to see that people are actually protected. We work, we pay taxes, we pay for our protection and we don’t get it.”

Standing by the memorial across the street from Tops, Leslie Thomas, 61, said she understood the visit had irritated some neighbors. But she added that she believed it was a critical step for the community that continues to grieve.

“Whether some people want to believe it or not, it’s just a president’s duty when something so dramatic happens and shows his support,” said Ms. Thomas, who owns a boutique on Fillmore Avenue. “Some people are against him showing up. But that’s what leadership does.”