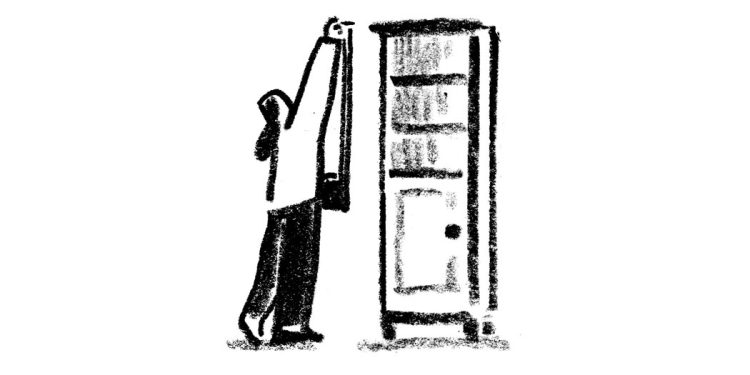 I live in Astoria. One day, while I was walking with my mother and on the phone, I saw a doorman put a beautiful corner cabinet next to a pile of garbage outside the church a few doors down from my building.

It was a high quality piece that I knew would look great in my apartment, so I ran home to get a tape measure and then returned to see if it was the right size.

While I was measuring, I heard a small voice behind me.

I turned and saw a young man standing.

I said goodbye to my mother and turned back to the young man.

How could I refuse?

Without saying a word, he lifted the cupboard easily and hoisted it over his shoulder. We walked down the street and went up the stairs when we got to my building.

Once we got inside and the cabinet was in place, I wasn’t sure how to thank him.

He saw my piano.

I got into a taxi that stopped at a red light on Park Avenue. The taxi was immaculate and the driver was, as my parents would say, a real gentleman.

Suddenly, halfway through where I was going, he asked, If we’re at a red light, can I feed the birds?

He jumped out of the booth with a large bag of seed in his hand and began to spread it among a large group of pigeons loitering in the mall.

Do you do this often? I asked when he came back.

It’s hard to find a meal in the winter, especially for smaller birds, he said.

Then he reached into another bag to toss some large breadcrumbs at an expectant sparrow.

My husband came home from lunch very exhausted. One of his earplugs had jumped on the way home, crashed into a pile of leaves and fell through a sewer grate.

When he looked down, he could see it resting on some leaves below. Thinking he might be able to fish it out, he wrapped a long cord around a flashlight with a magnetic handle. He could lift it as high as the sewer grate, which was too narrow to get through.

He had to go to a meeting, so he had to give up. I decided to give it a try before the sun went down.

Armed with a small but powerful magnet tied to a long cord, I looked through the grille, saw the earbuds, and tried my luck. I too managed to get it on the magnet, but I couldn’t get it through the grid either, and it fell back down.

“Looking for something?” I heard a man say.

I turned around and saw two construction workers standing there. I told them what I was fishing for. One of them removed the grille, asked for the magnet, and pulled up the earbud effortlessly. Then he put the grill back on and they walked away.

On a roof in Brooklyn

I was on a rooftop in Brooklyn looking down
and had packed a camera, took it out
and loaded my last roll of black and white film.
patiently still.

saw an empty bird’s nest on a windowsill.
think they all learned to fly, wish them all the best.

saw a well dressed woman put mail in her bag
and a tricycle with a missing wheel in the mud.

for what it’s worth:
a photo is the only way to reverse time travel.

across,
what looked like a castle at first
was really just the back of the church.

if I was on the roof before,
would have had more time before the moon rose.

so it didn’t take long for me to put the lens cap back on
and I walked down – fast forward:

back on the block on the platform
and the doors were open,
what more can i ask for?

I crossed Madison Avenue on a very hot August day. Traffic was mostly frozen when a Cadillac drove past a truck and stopped at a light.

The truck driver got out and started yelling at the driver of the Cadillac, whose windows were rolled up.

“What are you stupid or something?” he screamed.

The Cadillac’s window rolled down slowly.

Read all recent entries and our submission guidelines† Reach us by email diary. or follow @NYTMetro on Twitter.