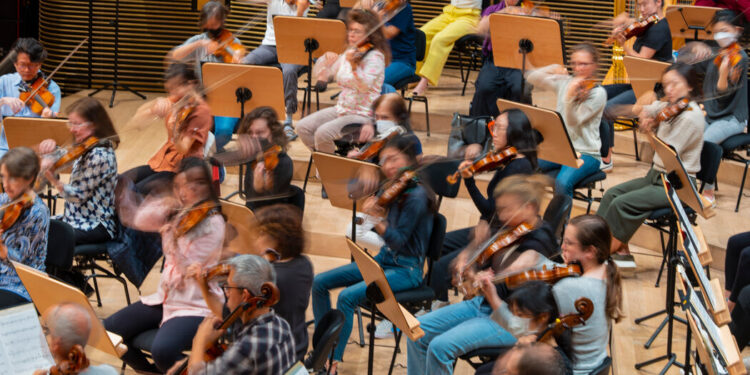 Still, many performers hailed the new prevalence of women in the Philharmonic Orchestra as an important development. Symphony orchestras have long been seen as the rule of men. And in leading ensembles like the Philharmonic, whose players are tenured and can remain in their posts for many years, progress is generally extremely slow. A meaningful demographic change can take decades.

“It’s more like a family now,” says Sherry Sylar, associate principal oboe, who joined the orchestra in 1984. “There are both mothers and fathers.”

For much of its history, the Philharmonic, the oldest symphony orchestra in the United States, was closed to women. At the time of its founding in 1842, women were not only discouraged from pursuing careers in music – they were rare to attend evening concerts unless they were with men. (In “Philharmonic: A History of New York’s Orchestra,” Howard Shanet wrote that in the 19th century, the ensemble’s public rehearsals on Friday afternoons were popular with “unaccompanied ladies who could venture with more propriety by day than by night. ”)

It wasn’t until 1922 that the Philharmonic hired its first female member, Stephanie Goldner, a 26-year-old harpist from Vienna. She left in 1932 and the orchestra became an all-male bastion again for decades.

Then, in 1966, Orin O’Brien, a double bass player, was hired as the Philharmonic’s first female section player. Often described as the first woman to become a permanent member of the orchestra, she was at the forefront of a pioneering group of female performers that opened doors for other women to join. The orchestra’s transition to blind auditions in the 1970s was seen as a fairer process. In 1992 there were 29 women in the orchestra.

But even as representation increased, female musicians often faced discrimination. Sexism was rife in the industry (the maestro Zubin Mehta, who in 1970 opined that he still did not think women should be in orchestras because they ‘become men’, was appointed music director of the orchestra six years later). Fewer women were getting the highest-paid key positions, and some who did found they were earning much less than their male counterparts. In 2019, the Boston Symphony settled a lawsuit in which the orchestra’s principal flautist said she was paid less than a male colleague, the principal oboist.