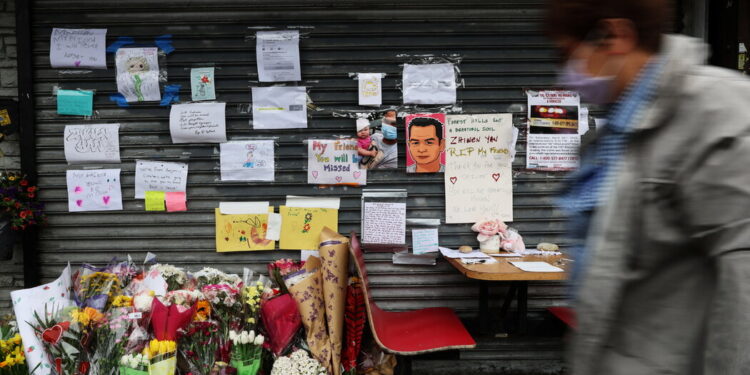 A man charged last month in the murder of a Chinese food delivery man amid a dispute over duck sauce was found dead on Friday after shooting himself in his apartment in Queens, according to two people with knowledge of the case.

The man’s lawyer confirmed that his client appeared to have committed suicide.

Authorities found the man, Glenn Hirsch, 51, checking him out after failing to appear in court in the murder case, attorney Arthur L. Aidala said. An official cause of death had not yet been determined on Friday afternoon, the medical examiner said. Mr Hirsch left a note, according to the two knowledgeable people.

At the time he was found, Mr. Hirsch out on bail with an ankle bracelet monitor after being charged with murder and other charges in June for the murder of delivery man, Zhiwen Yan. He pleaded not guilty and faced life imprisonment if convicted of murder.

“Glen Hirsch and I had an excellent relationship and I am saddened that he went down this road when we were very well prepared to fight this in court,” said Mr Aidala. “He consistently maintained his innocence.”

A family lawyer of Mr. Yan, Jennifer Wu, said they were “in shock” after learning of the apparent suicide. She declined further comment.

According to prosecutors, Hirsch shot and killed Mr. Yan on April 30 during a dispute that stemmed from Hirsch’s feeling that he had not gotten enough duck sauce with an order he had placed several months earlier at Great Wall, the Chinese restaurant where Mr. Yan had worked for more than two decades.

Mr Yan was sitting on his scooter at a traffic light when Mr Hirsch approached him on foot from across the street and fired several shots at him before driving away in a car, prosecutors said. Mr Yan was taken to Elmhurst Hospital Center where he was pronounced dead, officials said.

Mr Hirsch had been involved in previous altercations with Great Wall workers, cutting an employee’s car tires and on another occasion telling employees, “I have a gun,” prosecutors said. On one occasion, he pointed a gun at a worker who was shoveling snow outside the restaurant, prosecutors said.

The death of Mr. Yan shocked the middle class section of Forest Hills where it took place. Local leaders denounced the killing as a disturbing example of the increase in violence against food deliverers, many of them Asian-American, during the coronavirus pandemic, and of the increase in bias attacks against Asian Americans in general.

mr. Yan was a native of Fuzhou in southeastern China. Friends and colleagues described him as someone who worked seven days a week to support his wife and three young children, and sometimes helped his wife with her job at a nearby laundromat when the restaurant was quiet.