Mayor proposes 1,400 shelter beds to get homeless off the streets 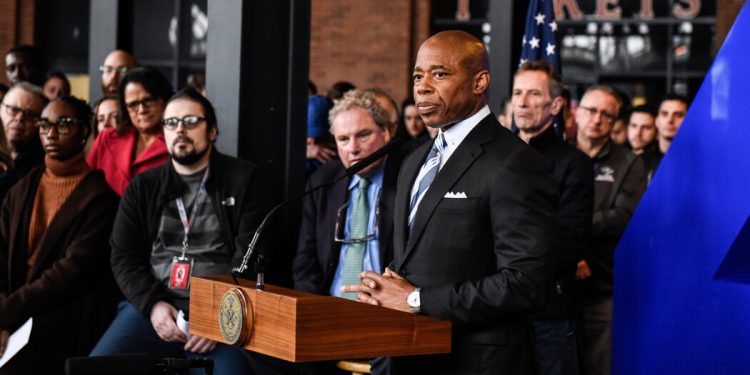 Mayor Eric Adams committed additional funds to his efforts to get homeless people off the streets of New York City on Sunday, announcing Sunday that he would propose a $171 million investment in homeless services, including funding for 1,400 specialized shelter beds.

The expenses come as the city carries out an aggressive plan to remove homeless people from camps and the subway system.

Mr. Adams’ plan would build on a program begun under the previous mayor, Bill de Blasio, to provide temporary, specialty shelters for New Yorkers who come off the streets — beds in high-quality facilities that offer more services and have fewer restrictions. including no curfew. Some have private rooms instead of barrack-style beds.

Mr. Adams had previously announced the addition of 500 beds to the program as part of his drive to remove homeless people from the subways; the proposal unveiled on Sunday would expand the total number of such beds to more than 4,000, city officials said.

The program aims to ease the transition off the street for homeless people struggling with mental health and substance abuse issues. While the facilities vary in size, they tend to be smaller than the shelters, although the mayor’s office was unable to provide details.

Mr Adams, a Democrat who took office in January, has focused on public safety and the city’s pandemic recovery in the first 100 days of his administration. He was pressured to do more to help homeless New Yorkers after he was criticized for clearing camps.

The mayor is in the midst of budget negotiations with the city council and plans to unveil his executive budget proposal Tuesday in a keynote address at the Kings Theater in Brooklyn. He has not yet released a detailed housing plan, although he had promised to.

In February, in his preliminary budget proposal of $98.5 billion, Mr. Adams proposed $2.1 billion in spending on the Department of Homeless Services.

The final budget must be approved by the Council before 1 July.

The mayor has defended that the police of homeless camps is crucial to the revitalization of the city. Several of the sweeps were captured in videos, widely shared on social media, showing officers tossing the belongings of homeless New Yorkers into the trash.

“We have to give up the belief that it is dignified to have people living on the streets in camps, tents, cardboard boxes, no access to mental health care, drug paraphernalia, human waste in these tents,” Mr Adams said in a televised statement last week. interview.

“This $171 million investment in solutions that can better support the homelessness transition for out-of-home New Yorkers is the right approach and a big step forward for our city,” Ms. Adams, a Democrat, said in a statement.

In his announcement, Mr. Adams sought to draw attention to the work of outreach teams who claimed to have persuaded 700 people who lived on streets and subways to seek shelter.

That assistance is sometimes hampered by the shelters themselves, which can be crowded and dangerous, leading some to prefer the streets. City statistics from January show that less than a third of people living on the metro who were persuaded to go to a shelter were still there at the end of the month.

The mayor’s proposal would allocate $12 million in funding for outreach and create three new drop-in centers that provide medical and behavioral health services.

Craig Hughes, a senior social worker at the Urban Justice Center who advocates for the city’s homeless population, said what his clients really needed were private rooms, as well as permanent housing that they could use without going through the shelter system. While he praised the mayor’s proposal to add shelter beds, he said it would do little to make up for the cleanup of homeless camps.

“His entire homeless policy was aimed at getting homeless people out of sight,” said Mr. Hughes.