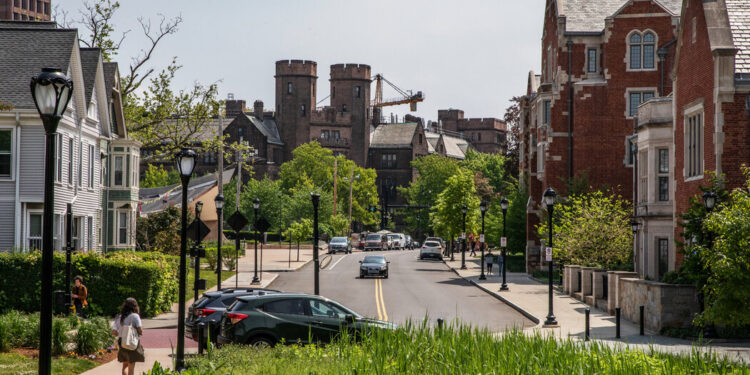 Many buyers are starting to hunt in East Rock, where colorful houses in late-19th-century Queen Anne and Mediterranean styles relax in shady gardens. Townhouse-lined Saint Ronan and Livingston Streets are among the top addresses, but elegant two-family homes with porches, whose mortgages are offset by rents from Yale students, abound along Orange Street, a café-strewn strip.

Now that stocks are low, there is renewed interest in Westville, whose shopping center, on Whalley Avenue and Fountain Street, next to Edgewood Park, offers Camacho Garage, an open-air restaurant. Further afield is East Shore, where beachy and suburban vibes are combined with colonials on small lots by a sea wall. Neighborhoods now popular with investors include Fair Haven, a one-time oyster farm on the Quinnipiac River.

Over the past 30 years, as office buildings near New Haven Green have been shedding tenants, developers have seized the sites for housing. The Center Court Apartments, at 116 Court Street, for example, are now apartments. But the downtown area is mostly rental, a trend sparked by the 2010 construction of 360 State Street, a 32-story, 500-unit tower that ranks among the tallest in the city.

Corsair, a 238-unit project with a courtyard pool, is located where airplane propellers were once manufactured; on the other side, a second complex of 75 units is being built. A sprawling former arms factory in Winchester, which has been under redevelopment for decades, has added 158 apartments and was approved this spring for 287 more, which will join biotech offices. And Audubon Square, a phased project adding 464 rental homes to several large parking lots, is being built by Spinnaker Real Estate Partners, which is also overseeing the 500-apartment redevelopment of the windswept site where the New Haven Coliseum once stood, with plans to break ground. this year.