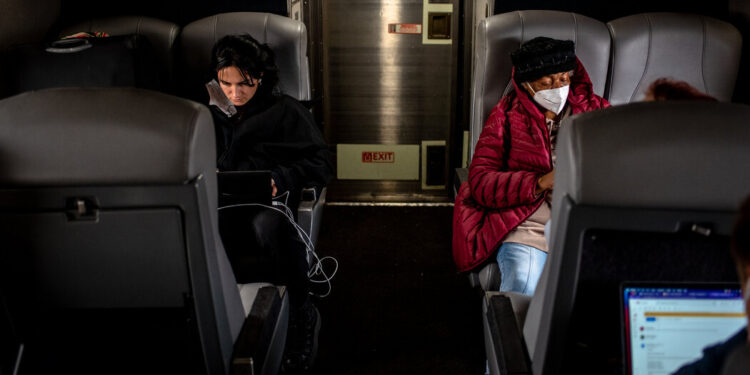 The shift in commuting caused by the pandemic left empty seats on the once-crowded trains and buses that took commuters from New Jersey to New York City. But those busy conditions will return and could worsen over the next decade as the region’s population grows and more employers are recalling workers to their offices, a new study concluded.

Even if working from home quadruples from prepandemic levels, there would still be more commuters getting on trains and buses to cross the Hudson from New Jersey on some weekdays than in 2019, according to the study, released on Wednesday by the Association for Human Resources. Regional Plans.

The study comes at a pivotal time for the long-delayed plan to add a rail tunnel under the Hudson — a sprawling $30 billion project that has gained momentum and political support, but still needs state and federal funding.

The researchers found that future crowds would likely be worst on Tuesdays, Wednesdays and Thursdays — the days when employees are most likely to be expected to be in the office, the study said. On those days, there would be as many as 46,000 more cross-Hudson transit drivers by 2030 than in 2019, an increase of more than 10 percent.

For a transit network that was already overcrowded and prone to disruptions and delays, that could be a problem. More than 400,000 commuters crossed the Hudson on trains and buses every weekday in 2019, many of them rubbing shoulders in the aisles as they arrived at Pennsylvania Station and the Port Authority Bus Terminal.

At the time, transit managers and elected officials gathered support for the construction of a second rail tunnel between New Jersey and Penn Station to complement the existing pair of single-track tubes built more than 110 years ago. The tunnel is part of a $30 billion project known as Gateway and would improve reliability and help meet the need for additional capacity, officials said.

But just as political support for Gateway grew, Covid drove most of those commuters out. Passenger numbers plummeted as people stayed at home, leaving only the most essential workers on the commute. Seats started to fill up again as the pandemic subsided, but rider numbers are still well below 2019 levels.

The continued decline in commuter flows raised the question of whether Gateway would still be needed, said Thomas K. Wright, the director of the Regional Plan Association, which is a strong supporter of the project. But the study, which mapped out four scenarios for the growth rate in the region, found that commuter numbers will return soon, Mr Wright said.

“Even with a slow return to offices and modest job growth, we need the additional capacity that Gateway will bring,” said Mr. Wright.

Excavation of the tunnel has not yet begun and is not expected to be completed for another ten years. Funding for the project, which will likely be split between the federal government and the states of New York and New Jersey, has yet to be worked out.

The project has broad support among elected officials from the region. But Republicans from other parts of the country have resisted a major federal investment in it and held back progress on the project during the Trump administration.

It has also been criticized for its staggering estimated price tag, concerns about the potential for massive cost overruns and doubts about its necessity after the pandemic. Predicting commuting patterns in and around major cities after the pandemic is a complicated task, said Richard Florida, a professor at the University of Toronto’s School of Cities.

“The central business district is the last vestige of the old industrial age,” said Mr. Florida. “I think that the office district where you pack and stack knowledge workers and plug in their laptops is a thing of the past.”

Mr Wright said it was urgent for states to reach an agreement that they can submit to the Federal Department of Transportation before the midterm elections, when Democrats are likely to relinquish control of Congress. “From January next year, it could be much more difficult to work with the federal government on this matter,” said Mr. Wright.

Stephen Sigmund, a spokesperson for the Gateway project, welcomed the report’s findings. “For two years, some have questioned whether Gateway is really so urgently needed after Covid,” he said. “This report shows that the answer is yes.”

Regardless of his previous plea for Gateway, Mr. Wright said that if his organization’s analysis showed that the tunnel wasn’t going to be needed anytime soon, he would say so. “We stand by the integrity of our investigation,” he said.

The analysts estimate that regular commuters to Manhattan before the pandemic worked from home on average only about one day a month. They calculated the long-term effects on trans-Hudson’s commute if they continued to work from home about twice a month or even once a week on average.

They tested those scenarios against both robust and slow growth rates for the region’s population and employment. In all cases, they found that aggregate demand for seats on trains and buses crossing the Hudson would exceed pre-pandemic levels by 2050, if not sooner.

In all but the slow-growing, most work-from-home scenario, that new high demand would arrive in 2040, several years after Gateway was scheduled to be completed, their analysis found. If the regional economy grows as fast as it has in decades past, additional capacity could be needed even before Gateway could be completed, especially in the middle of the work week, they concluded.

Commuting patterns are sure to change, Mr. Florida said, but with traffic on city streets already returning to pre-pandemic levels, many people will be taking public transportation to the cities for other work and leisure purposes, such as attending shows and sporting events.

“It seems to me that the long-term problem is that if you’re going to drive a region of 20 to 25 million people, the car isn’t going to work,” said Mr. Florida. “I’m not sure the Gateway tunnel will even solve it.”