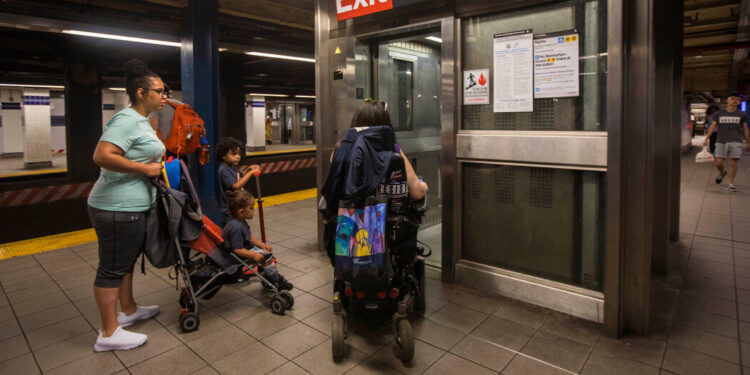 New York has been years behind other major U.S. cities in making the subway system accessible to people with disabilities: Only 126 of its 472 stations, or 27 percent, have elevators or ramps that make them fully accessible.

But on Wednesday, the Metropolitan Transportation Authority said it would add elevators and ramps to 95 percent of subway stations by 2055 as part of a settlement agreement in two class-action lawsuits over the issue.

The agreement, which still requires court approval, would establish a clear – albeit long-term – timeline to address an issue that has effectively prevented people using wheelchairs and mobility aids from fully accessing the The city’s public transport system, a backbone of social and economic life.

Transit officials must also address nine partially accessible metro stations, where passengers who cannot use stairs can only access trains that run in one direction.

“We have no equality, we have no equality, if people are not able to use a public transportation system that is the only way for so many people – more than half of New Yorkers – to get around,” Janno Lieber, the authority’s chairman, said.

The changes required by the settlement will benefit a broad segment of the population who struggle to use narrow fare gates or climb subway stairs, including parents carrying children in strollers, shoppers carrying bulky items home. and airport travelers with luggage.

In a statement, Joe Rappaport, the executive director of the Brooklyn Center for Independence, a plaintiff in the lawsuits, said the settlement agreement “will ensure that no one is barred from the fastest and best way to get around the city.”

But the most transformative effects are likely to be felt by people with disabilities who are excluded from large parts of the New York City subway system and, by extension, parts of the city it serves.

Many individual subway lines have significant sections that are off-limits to wheelchair users, including areas outside of Manhattan where the distance between accessible elevators is more than 10 stops.

Disability rights advocates have spent years trying to get the transport authority to improve access, paying particular attention to the lack of lift service. In 2017, a group of disability organizations and disabled residents filed a lawsuit in state court saying the lack of elevators in the transit system was a violation of the city’s human rights law.

Two years later, another set of plaintiffs filed a federal lawsuit accusing the transportation company of violating the American With Disabilities Act — which prohibits discrimination against people with disabilities in public facilities — when officials renovated subway stations without elevators, ramps, or other similar devices. to install accommodations.

When the American With Disabilities Act was passed in 1990, all public facilities built after 1993 had to be accessible. While much of the subway system is significantly older, in 1994 the transit agency reached an agreement with the federal government to make 100 “key stations” accessible by 2020, a goal it has achieved.

Transit officials have been criticized for the slow pace, which disabled riders say was insufficient given the breadth and scope of the metro system, which operates around the clock and has the highest number of stations of any city in the world.

Relatively newer transit systems, including those in San Francisco and Washington, are fully accessible. In the past, New York transit leaders said upgrading the aging underground system would be too expensive and many of the stations were too old to be effectively overhauled.

But other old metro systems have significantly higher accessibility. More than two-thirds of stations in Boston, Philadelphia, and Chicago meet American With Disabilities Act compliance standards.

Mr Lieber said that in recent years the transit authority had come to realize that the pace was not fast enough. Before his tenure, in late 2019, transit officials approved a $5.2 billion plan to equip 70 stations with elevators by 2024, a rate the agency had “never operated” before, he said.

The settlement agreement would strengthen that commitment and make it permanent. The transit authority should spend a certain amount of its capital budget on improving accessibility.

“It’s going to cost billions of dollars, it’s going to take a lot of sweat and muscle, but we’ll make it happen,” said Mr. love.

The settlement will not make the metro system fully accessible. Mr Lieber said the remaining five percent of stations not covered by the agreement have difficult technical issues, including concerns about stability or additional weight, which would make adding lifts or ramps unfeasible.