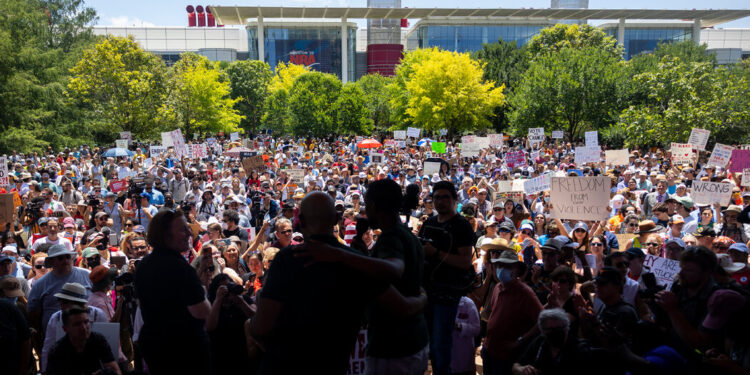 HOUSTON — On one side of an avenue in downtown Houston, people flocked to the National Rifle Association’s annual convention this weekend to talk about guns, admire guns, buy guns, and the holy scriptures of Second Amendment law to invoke the bearing of arms; that is, guns.

On the other side of the avenue, people protested against guns, the gun defenders, the proliferation of guns and the unholiness of Americans’ easy access to guns that enabled two mass murders this month; that is, the murder of 10 people, most of them black, at a grocery store in Buffalo, and the murder of 21 people, including 19 children, at a Texas elementary school.

While people on one side of the avenue sweated and screamed in the blazing Texas sun, others poured into the comfortable coolness of the George R. Brown Convention Center. But the air-conditioned hall was not hermetically sealed. The schoolchildren massacre earlier this week had taken place in Uvalde, just 500 miles west of here on Interstate 10. It was too close in time and distance.

Inside, politicians talked about “hardening” schools to a mix of NRA believers and newcomers curious about the cause. Outside, experienced and novice protesters waved handmade signs and photos of children shot this week, in the faint hope they would change their mind.

Among these protesters were people like Dana Enriquez-Vontoure, a schoolteacher for more than 25 years, who stood outside the convention center with a sign she had made hours earlier. It repeated three words five times:

“You used to leave your babies with me and they would be safe,” said Ms. Enriquez-Vontoure, 46 and mother of two girls. “Now we live in a world where we can’t promise that.”

She scoffed at suggestions from some gun lawyers to increase school safety by arming teachers and other school officials. She said the doors of her local schools are locked during the day. To pick up her daughters, she has to scan a QR code, fill out a form and wait for her child to be escorted outside. No weapons involved.

At that time, a criminologist and mother named Aramis Miller appeared at the side of Mrs. Enriquez-Vontoure. She was holding her own sign — “Don’t scapegoat the mentally ill” — and the two were about to join the larger protest, which drew many hundreds, across the convention hall. They have known each other since primary school.

But those who flashed the correct credentials were able to escape the heat of the furious teachers and the blazing sun and enter the welcoming coolness of the NRA convention.

Here was Michael Shao, 50, born in China and now living on Long Island, who said he promoted gun safety programs for Asian Americans unnerved by the spate of violent attacks on members of their community. And here were three men from Chicago, all dressed in Ukrainian yellow and blue, searching for binoculars, night vision goggles, and other items that might be useful.

“We’re just looking around,” says Igor Terletsky, 50. “To see what’s new on the market and how we can support our Ukrainian brothers and sisters.”

And here, too, was a white-haired man wearing a T-shirt that read, “We the People Are Pissed.”

The like-minded within the convention mingled amicably, their clattering of arms interrupted only by the angry, sometimes obscene chants coming from across Avenida De Las Americas, and by journalists asking for their reactions.

Tim Hickey, 45, who had come from Cleveland to promote his company, PatchOps.com, which sells “morale-boosting” patches and political T-shirts, was annoyed at the “You hate kids!” chorus is currently being sung. He has two children aged 14 and 12.

“I would die for one of their children right now,” said Mr. Hickey, a bearded former Marine. “Would they do that? I do not think so.”

He called the Uvalde massacre “heartbreaking” and said many gun owners grieve in slightly different ways than others “because we wish we were there to stop it ourselves.”

Mr. Hickey defended current gun laws, repeated a common refrain that “you can’t control evil” and saw no connection between the Uvalde shooting and the NRA, including this convention.

Next to him was Kat Munoz, 34, of Novi, Michigan, who described herself as a survivor of domestic violence and a social media “influencer” for female self-defense. Her therapy dog, a Belgian Malinois named Millie, sat at her feet.

Mrs. Munoz is a mother of two children, 11 and 9 years old. She too expressed her deep sadness for Uvalde. She also defended the country’s gun laws and the NRA. She said that, to the best of her knowledge, none of those responsible for mass shootings were members of the NRA. And, she said, “gun laws don’t change psychopaths from being psychopaths.”

She set out to find a place for Millie to relieve herself, intending to stay away from the demonstrators gathering across the street. Later, while queuing to hear former President Donald J. Trump address the convention, Ms. Munoz texted that “recent events” had left her wondering whether “we could compromise on raising the age for a firearms or stricter background checks on AR-15s,” the weapon style used by the 18-year-old gunman in Uvalde, Salvador Ramos, and the 18-year-old accused gunman in Buffalo.

“If that’s what it takes to not completely lose our rights, I wouldn’t be against it if it’s absolutely necessary,” she wrote.

The Buffalo and Uvalde shootings—joining Pittsburgh, Charleston, Parkland, Sandy Hook, and others, too numerous to list here—had different effects on this year’s NRA celebrations.

But all three dropped out at the end of last week. McLean told Fox News that performing would be “disrespectful.” Mr. Gatlin told DailyExpertNews it would have been “sort of a classy move” for the NRA to cancel the convention and instead have a moment of prayer or silence.

There was another notable absence at one end of the hall where, according to exhibitors’ NRA map, a large space had been set aside for the Georgian firearms company Daniel Defense, the manufacturer of the gun that killed 19 people in Uvalde. Instead, the space was taken up by a few tables and a popcorn machine.

But the many exhibitors who did show up did their best to provide a blissful, if temporary, separation from the reality that awaited just outside the doors. There was something for everyone from the dedicated hunter to the anxious survivalist to those looking for outfits in which to fashion a gun to hide.

Here were knives and pistols and rifles, artfully displayed and available to hold. At a firearms manufacturer’s booth, a salesperson urged a reporter to grab a short-barreled rifle with a side-folding stock. “Touch it! Feel it!” he said seductively. “It won’t bite.”

Here were portable devices to retrieve your used cartridges, streamlined safes to store your weapons, and crocodile hunting promotions. A booth for the NRA cigar club. A booth for a wireless provider promoting Christian conservatism. A long line for some ‘Freedom Fuel’ or whatever else was brewing at the Black Rifle Coffee Company.

As Friday progressed, NRA members began to move out of the convention center’s protective bubble. They knew that the exhibit hall would open early Saturday morning, featuring the latest Kalashnikovs and Rugers and Glocks, and that on Sunday, the last day of the convention, many would gather in the grand ballroom for breakfast with prayer on the menu.

In the Friday night heat, some conventioners lingered on their side of the avenue, smoking cigarettes, watching the protests with disdain and occasionally taking selfies with the angry crowd in the background. Several said they believed these protesters had their rights too.

Others ventured across the two lanes, not to get involved in the shouted accusations that spared no one, including elderly veterans, but to pick up their cars or go to their hotels. They passed placards that read ‘Enough is enough’, ‘Guns are the death of the US’ and ‘Am I next?’ – this one was held by a girl barely taller than the crowd-controlling barrier gates, over which blood-red children’s clothing was draped.

Some NRA members, carrying bags full of convention stuff, smiled and waved as they passed. Others, however, kept their eyes on the hot sidewalk.