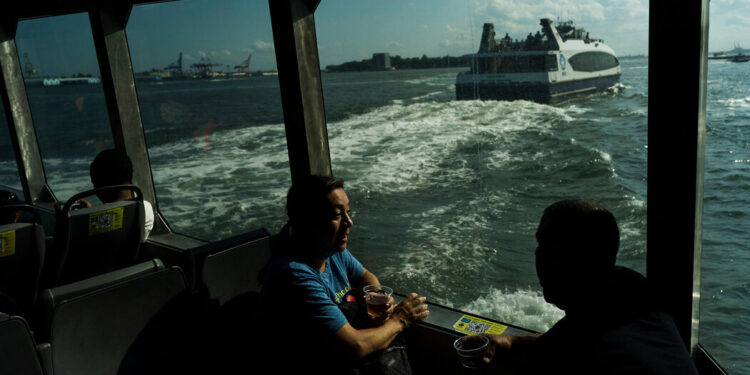 The agency responsible for managing New York City’s ferry system has not reported costs of nearly a quarter of a billion dollars during Mayor Bill de Blasio’s administration, the city commissioner said in a 50-page audit on Wednesday.

“We trust the city to be honest about how much things cost so that we can make clear, shared decisions about where the money goes,” the auditor, Brad Lander, told reporters. “When hide-and-seek is played with any amount of money – certainly a quarter of a billion dollars – you can’t rely on your city to deliver the truth.”

The report details record-keeping issues with the city’s Economic Development Corporation, a semi-independent agency that manages the ferry network with private company Hornblower. According to the audit, the EDC made excessive payments to Hornblower and did not hold the operator responsible for the signed contract.

Fred D’Ascoli, the development company’s finance director, dismissed some of Mr. Lander’s findings in a letter.

“We believe that relevant data has been misrepresented, important facts have been misinterpreted or that NYCEDC’s contractual agreement with the NYC Ferry operator has been misunderstood,” D’Ascoli wrote.

Asked to comment, Mr de Blasio said he had not read the full report and its 11 recommendations. The development company agreed to follow up on some of the suggestions, including soliciting bids for a new system administrator to potentially replace Hornblower when the contract expires next year. But it has denied overpaying Hornblower with $12 million, which the auditor calculated based on his audit.

“If there are issues of under-reporting at EDC, or by the ferry companies, that needs to be addressed and whatever accountability or reforms are needed adopted,” Mr De Blasio said in a prepared statement. “The continuation and growth of the ferry system is vital to New York City. Now more than ever, we need more affordable, accessible transportation options that connect the five boroughs. †

Mayor Eric Adams, meanwhile, said through a spokesperson that his administration was “well aware that there is room for improvement”, adding that his staff was working on a plan to ensure the ferry system was financially sustainable and more accessible to those who needed it.

The ferry system, which is highly subsidized by the city but often serves more affluent horsemen, was a focus of Mr de Blasio during his two-year tenure as mayor. In 2015, he unveiled a plan to spend more than $325 million on a fleet of custom ferries and docks, but by 2019 those costs had nearly doubled.

According to the Citizens Budget Commission, an impartial, non-profit community organization, New York’s ferry system is estimated to have one of the highest transit subsidies in the country at $9.34 per ride, compared to $1.05 for the subway.

And the committee also found that the average subsidy for each passenger in the first year the system was in operation in 2017 was $10.73, far more than the de Blasio administration’s original estimate of $6.60.

According to the audit, the development company collected $758 million in ferry-related expenses between July 1, 2015 and December 31, 2021, but only reported $534 million in expenses.

The auditor’s office said several decisions by the development company have cost millions in unnecessary costs, including the purchase of vessels at costs exceeding the market price.

In one case, the audit said, development company Hornblower ordered and paid $8.4 million for a Rockaway Class ship model, but instead received a River Class model that the agency later estimated at $5.6 million. The EDC has never asked Hornblower to refund the $2.8 million difference.

In a prepared statement, a Hornblower representative said the company has “constantly worked to provide high-quality transit options at affordable rates while expanding the ferry system” and noted that it refunded $1 million in scheduled payments from the city while it passenger numbers declined during the pandemic.

Hayley Richardson, a spokeswoman for Transit Center – an urban public transit advocacy group – said the city needs to cut subsidies to the ferry system, urging officials to use those savings to improve bus service, mainly used by people with low incomes. income that does not. cars and living far from the metro.

In light of the Comptroller’s damning report, it is vital for Mayor Adams to direct the EDC to seek an open bidding process when the Hornblower contract expires in 2023, and to provide much more disclosure and transparency in the contract. ,” she said, noting that a stronger bus network “would have a much greater impact on improving transportation access and outcomes for everyday New Yorkers.”