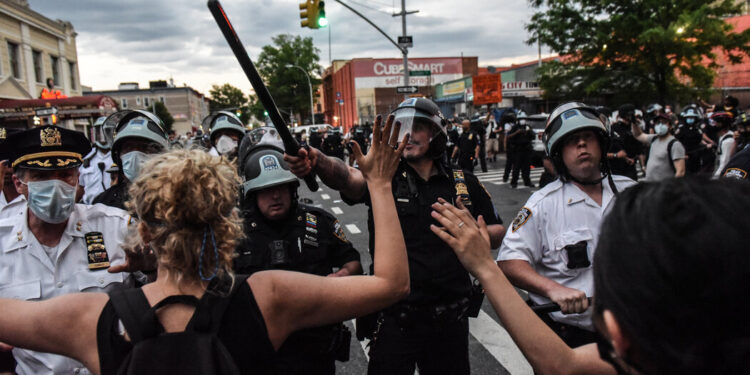 Amid a wave of protests after George Floyd’s murder two years ago, a deluge of videos showing officers behaving aggressively toward protesters — attacking crowds and sometimes hitting or pushing people on the ground — sparked a flurry of complaints about their conduct to an independent supervisory authority.

Now, after a lengthy examination of a mountain of evidence, including many of those recordings, the agency said Wednesday that 145 city police officers should be disciplined for misconduct during the demonstrations, which drew thousands to the streets in all five boroughs.

The agency, the Civilian Complaint Review Board, said it had found evidence to support 267 allegations of misconduct against the officers. For about 60 percent of them, it recommended the highest degree of discipline, which could lead to an administrative process and the loss of vacation days, suspension or termination.

The police response to the demonstrations sparked widespread criticism from human rights organizations and residents at the time. That year, the city’s Department of Investigation found that some officers were using tactics that violated protesters’ First Amendment rights and that “excessive enforcement” often heightened existing tensions.

As the protests continued, the review committee began investigating more than 750 complaints about the actions of officers.

Among the allegations the review committee substantiated were several high-profile incidents, including against three officers that were captured on video driving their vehicles in a crowd of protesters and against several others for using their bicycles as weapons against protesters.

Police have said the incidents were isolated and pointed to examples of protesters injuring police officers. Former commissioner, Dermot F. Shea, said in a 2020 interview with the Department of Investigation that officers “did a phenomenal job under extremely difficult circumstances,” while stating that there were “a few instances” where their behavior was inappropriate. .

Earlier this month, the deadline for investigating the complaints expired.

The review committee has said its investigations were hampered by the lack of cooperation from the police. In addition, about one in four fully investigated cases were closed because an officer could not be identified, because some covered their names and shields or wore the protective equipment of another officer, the review committee said.

Police have said some officers shared helmets and gear to protect each other, not to avoid liability.

The spate of misconduct reports following the Floyd protests are reviving a long-standing debate over whether the police commissioner should retain final authority over officer discipline.

The review committee advises the department which discipline it considers appropriate in the event of incidents in which it substantiates a complaint against an official. But recommendations for the highest penalty were often met with milder penalties from the department in the end.

Of the roughly 40 cases related to the protests the department has investigated, it waived discipline for 23 officers and chose not to follow the review committee’s recommendations in seven other cases. The police and the assessment committee have agreed on sentences for 10 officers.

Proponents of police accountability have long argued that the review committee does not have enough power to effectively supervise the police. While the group’s responsibilities have recently expanded to include new types of complaints, including racial profiling or police bias and sexual misconduct, investigators often have to rely on the department’s cooperation to access evidence, such as body camera footage.

Arva Rice, the watchdog’s interim chair, said review board members have urged lawmakers to improve their access to police records and exempt them from laws governing sealed cases. “We hope for support from the city and state lawmakers on these issues,” she said.

Christopher Dunn, the legal director of the New York Civil Liberties Union, said Mayor Eric Adams’ lack of comments about the review committee’s role in holding officials accountable “is a very loud message in itself.”

“The city failed the test here,” he said. “It is a clear message to the public that police misconduct is not a priority for this government. And it sends an even more disturbing message to the police that they can get away with abuse.”

Mr Adams has previously responded to similar criticisms by saying that he has been clear about seeking a balance between public safety and the demands for justice, and that he would not allow officers who break the law or act rudely. behave, stay with the police.

The department said in December it had taken more than two dozen recommendations from protest police reports, including developing policies around tactics such as mass arrests and clashes when officers surround protesters, block their exits and barge in to make arrests.

Even if the review committee’s investigation ends, the impact of the protests is expected to continue. The department is still investigating many of the incidents. And a series of separate lawsuits accusing the police of abusive behavior continues to be hotly contested in the courts. The legal department recently fired a lawyer for her handling of the cases.