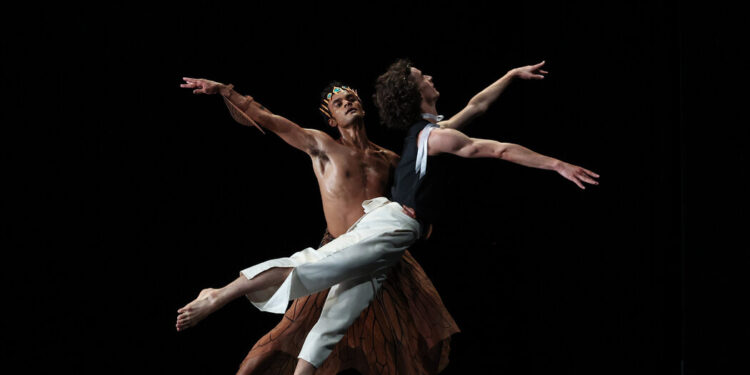 Most dancers know the moment they caught the dance bug. For choreographer Christopher Williams, who grew up in Syracuse, during a performance of “Les Sylphides”, it was recognized as the first ballet blanc, or plotless ballet. Originally performed by Sergei Diaghilev’s influential Ballets Russes in 1909, this work by Michel Fokine presents a glittering world in which a young poet encounters a group of sylphs, their blindingly white long tutus casting the scene in a ghostly haze.

Over the years, Williams has held onto that experience firmly: It was the first ballet he saw, as he writes in program notes, “which made me want to embody something terrifyingly otherworldly.”

Unterrestrial, ethereal, magical and, yes, otherworldly: these words are synonymous with Williams’ dances, for which he mined Greek mythology, folklore and the lives of saints. For his debut program at the Joyce Theater, which opened Tuesday, Williams pays tribute to his own dance awakening — as well as other works by the Ballets Russes — to create a new version of “Les Sylphides.”

Williams’ “Les Sylphides” is overly repetitive, a difficult hurdle to overcome with its spiraling, seemingly incessant movement vocabulary. But it becomes a gem if the choreography is less about making shapes than about feeling them. Certainly, this euphoric “Les Sylphides” is the highlight of the evening.

It’s also personal. As with another Ballets Russes-era reimagining on the program, “The Afternoon of a Faun,” Williams has put an odd twist on the original. Both are closely associated with Vaslav Nijinsky, the sensational dancer who choreographed and performed in the first, very erotic “Faun”; Williams’ response is to cast Taylor Stanley, a gifted New York City Ballet director whose soulful, subtle dance manifests itself from within. While incredibly precise, Stanley has the ability to be mysterious without trying; here he is something of a wizard in the way he brings to life the sculptural poses so reminiscent of Nijinsky, but with his own modern beating heart.

In “Les Sylphides”, set to Chopin, Stanley has an excellent partner in the dancer Mac Twining, who also appears with him in excerpts from “Narcissus”. (More excerpts from “Daphnis & Chloé” only served to slow the program; the first half, including parts of “Faun,” ended up somewhere on the moon-like side of slow.) As the poet, Twining, first seen in a journal with a quill pen sitting on the edge of the stage – it’s not as terrible as it sounds – meets the Queen of the Sylphs (Stanley), who rules a tribe of forest fairies.

For the Sylphs, Williams takes loose inspiration from the Radical Faeries, a countercultural movement of net-living queer communities; his Sylphs – spiraling and spinning as they flow in and out of formations across the stage – are reminiscent of terrestrial butterflies, rushing and darting in a dim night.

After a lilting dance reaches a feverish pitch – the Sylphs’ pique twists spin faster and faster until they ascend, seemingly floating in mid-air – Twining, red with freedom, is left alone with Stanley, who spins him out of his clothes. Together they run into the wing. It’s cute.

Williams’ Nymphs are more barbaric than usual; his Faun, an innocent one, doesn’t stand a chance and is eventually devoured by them. It’s a little crazy – more comical than shocking, like a scene from a zombie apocalypse movie. There was laughter. But the outburst of “Les Sylphides”—with its nod to Nijinsky and, it seemed, to Isadora Duncan—provoked a different kind of laughter, one born of rapture. It wasn’t just Jordan’s fanciful costumes that held the dance together, it was the… to dance† And that was different.

See you Sunday at the Joyce Theater, joyce.org.