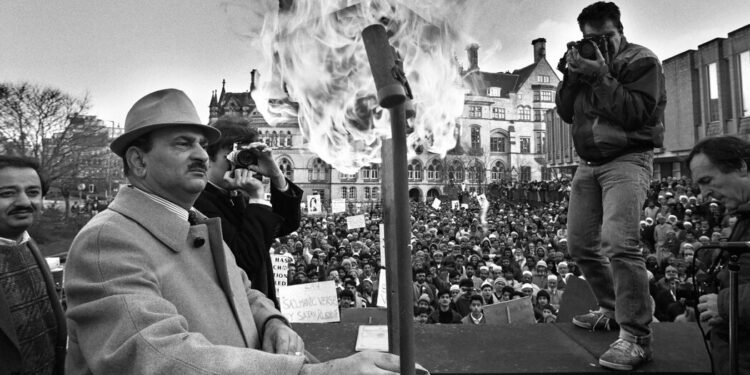 Salman Rushdie has been under the death penalty since 1989, about six months after the publication of his novel “The Satanic Verses,” which fictionalized parts of the life of the Prophet Muhammad with images that many Muslims considered offensive and some considered blasphemous.

Ayatollah Ruhollah Khomeini, the Supreme Leader of Iran after the 1979 Iranian Revolution, issued a fatwa on February 14, 1989, ordering Muslims to kill Rushdie and put a multi-million dollar bounty on his head.

Mr Rushdie, then living in London, immediately went into hiding with 24-hour protection from the British police, moving from place to place every three days until a fortified shelter was prepared for him. He lived there for most of the next 10 years.

Even before the fatwa, the book had been banned in a number of countries, including India, Bangladesh, Sudan and Sri Lanka. Many died in protests against the publication, including 12 people in a February 1989 riot in Bombay and six more in another riot in Islamabad. Books were burned. Reaction grew after the book’s publication in the United States that same month, even as more countries banned it. There were attacks on bookstores and threats to many more.

After the fatwa, a half-hearted apology from Mr Rushdie, which he later regretted, was rejected by Iran.

Many people associated with the book were also targeted, and several were injured. In July 1991, Hitoshi Igarashi, the Japanese translator of the novel, was stabbed to death and the Italian translator, Ettore Capriolo, was seriously injured. In October 1993, William Nygaard, the novel’s Norwegian publisher, was shot three times outside his Oslo home and seriously injured.

The fatwa was enforced by the Iranian government after the death of Ayatollah Khomeini for 10 years, until 1998, when Iranian President Mohammad Khatami, who was considered relatively liberal, said Iran no longer supported the assassination. mr. Rushdie then began appearing in public again, attending book events, parties, and eating out at restaurants.

But the fatwa remains in effect, with a bounty from a semi-official Iranian religious foundation.