Sheila Rayam has been named executive editor of The Buffalo News 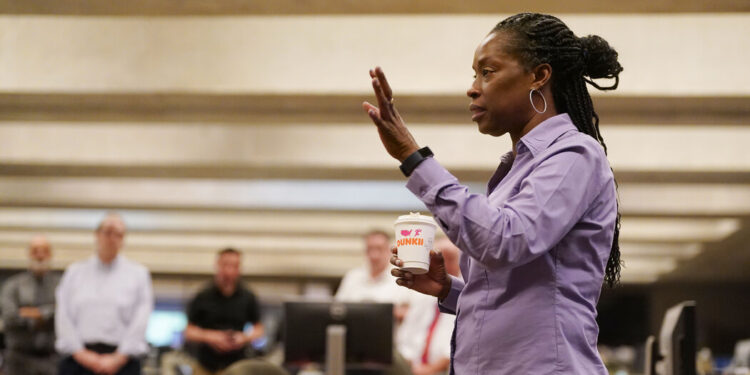 A black woman takes the helm of Buffalo’s daily newspaper as the city still mourns the racist supermarket massacre that shook the city this year, just as the economy and population showed signs of recovery from decades of economic decline.

A director of Gannett Newspapers, Sheila Rayam, 55, has been named editor-in-chief of The Buffalo News, the newspaper announced on Tuesday. She is the first black journalist and the second woman to hold this position in the newspaper’s 142-year history. The News was bought in 2020 by Lee Enterprises from longtime owner, Warren Buffett’s Berkshire Hathaway.

“I went to college in Buffalo, and I’ve always considered the city my second home,” Ms. Rayam said of the Western New York city, which is perhaps best known in the rest of the country for its division-winning NFL. team, its striking snowfall records and of course its wings.

Ms Rayam said she was excited to work in a veteran newsroom with a “strong reputation for great journalism”. Her appointment, effective August 22, followed the retirement of Mike Connelly, a veteran journalist who served as editor of The News for ten years.

It also came months after the May 14 mass shooting at the Tops Friendly Market in a predominantly black neighborhood of East Buffalo. An 18-year-old white gunman who embraced a white supremacist ideology was indicted for the shooting, which left 10 dead and three injured, nearly all black, in one of the deadliest racist massacres in recent US history.

The attack has shaken the city.

“When I looked from a distance, my heart was broken,” said Ms. Rayama, adding that the city was still healing. “But I’m hopeful that we’ll be part of a discussion that will help the community grow and become stronger together.”

In her new role as executive editor, Ms. Rayama said, she planned to continue running the paper to cover the entire city. “We’re going to look at everything from food insecurity to public safety to how residents support each other.”

The News, with a circulation of about 56,000 copies, is one of the largest in the state outside of the New York City area, but like many other medium-sized regional newspapers, it was ravaged by the pandemic and had to cut pay and leave staff.

Margaret Sullivan, the media columnist for The Washington Post who was also the first female top editor of The News before serving as public editor of DailyExpertNews, described The News as a “dominant force” that continued to do essential public service and watchdog. journalism.

“I was certainly thrilled to see Sheila’s appointment make history,” Ms Sullivan said in an interview. “It’s good to see.”

In the announcement, Tom Wiley, the president and publisher of The Buffalo News, said he was proud that Ms. Rayama would become its eighth editor and that she would help lead the organization “to an exciting future.” Currently, Ms. Rayam, who is from Rochester, about 70 miles northeast of Buffalo, is Gannett’s editor-in-chief of Mohawk Valley News Operations, which include The Utica Observer-Dispatch and The Times Telegram in Herkimer.

She has also worked at The Democrat and Chronicle in Rochester and is a graduate of the State University of New York at Buffalo.

Ms Rayam said she was most looking forward to working with journalists who were “passionate about serving their community; about telling great stories.”

And, she said, she was excited to be closer to the Buffalo Bills. “I’m a big Bills fan.”