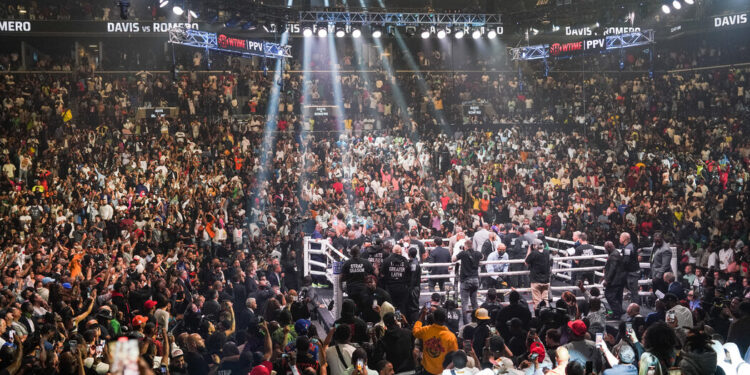 Ten people were injured early Sunday morning at the Barclays Center when a loud noise in the street outside caused panic, causing crowds to flee as they tried to escape from what they thought was a gunman.

The shooting came after a series of mass shootings in recent weeks. On Tuesday, a gunman killed 19 children and two teachers at a Texas elementary school, and earlier in May, a white gunman killed 10 people in a Buffalo supermarket during a racist massacre. In April, a gunman opened fire on a Brooklyn subway, injuring 23 people.

According to a New York Police Department spokesman, crowds were leaving Brooklyn’s Barclays Center around 1 a.m. after a boxing match between Gervonta Davis and Rolando Romero, when a loud noise was heard in the street outside the arena. People feared the noise might have been made by gunfire and started running frantically, with dozens of people rushing back into the arena.

Videos posted on social media show people pouring into the Barclays Center and running down the aisles for cover.

The police investigated and determined that no shots had been fired, although they could not say what had caused the noise. The ten people injured in the commotion were taken to nearby hospitals with minor injuries, according to the police spokesman.

Ryan Songalia, a boxing reporter for The Ring magazine, said the boxing match had ended and only media and production staff were in the arena when chaos erupted. As he prepared to submit his story about the match, he said, he heard a commotion and suddenly dozens of people started sprinting back into the arena.

At first he thought a fight had broken out, but then he saw the fear in the people’s eyes.

“They looked like they were running for their lives,” he said in an interview.

Listening to the sound of gunfire, he crouched for cover and discussed with other reporters nearby whether he should run for an exit.

“We live in this country and there has been a lot of bad headlines lately,” said Mr. songalia. “I thought our worst fears would come true.”

Naomi Osaka, the Japanese tennis player, was at the Barclays Center at the time and said on Twitter that she was “petrified” when she huddled in a room with other people.