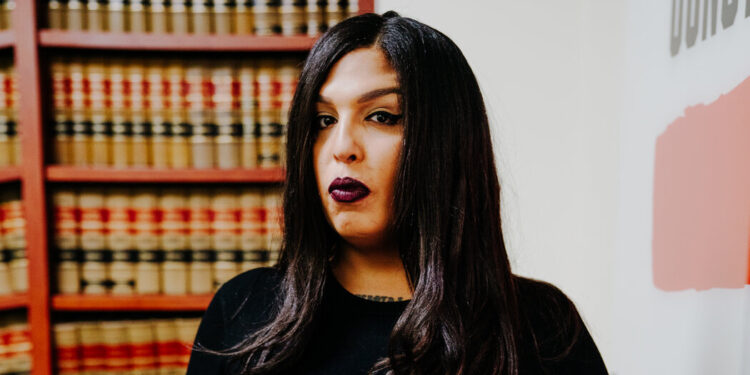 Mariah Lopez has been suing New York City for transgender rights since she was a child.

In 1999, at age 13, she was the lead prosecutor in a class-action lawsuit alleging that gay and lesbian children in foster care were the victims of routine violence and psychological abuse.

At the age of 17, she won the right to wear skirts and dresses in a male-only group home. At age 20, she sued the city to pay for her gender confirmation surgery; although she eventually lost, the city soon began to cover such operations.

The most recently resolved case of Mrs. Lopez against the city resulted in a sweeping settlement for transgender New Yorkers who are homeless and who have long complained of harassment, discrimination, and sexual and physical violence in homeless shelters across the city.

By the end of this year, the city is to open at least four special shelters, or units within shelters, for transgender people. It must also implement a wide range of anti-discrimination measures, including mandating anti-discrimination training for employees and a review of how it responds to complaints of abuse.

Ms. Lopez, who graduated from high school, wrote out files by hand, without a lawyer, while crashing on friends’ floors, playing tricks to survive.

“Let me paint this picture,” said Ms. Lopez, 37, of the homeless shelter case, which involved proceedings in both federal court and the state Supreme Court and ended in November. “With my little clicker, and a dog, and barely any sleep because I was stressed, and a phone that barely worked to look up the law, I filed a petition for a chicken crab and it brought me before a judge of the Supreme Court. †

Ronald E. Richter, who was a city government deputy commissioner for children’s services while Ms. Lopez sued the agency, said when she first arrived on the scene, “Our system had absolutely no understanding of young people struggling with being transgender and not appreciate what it meant to be born wrong.”

He said Ms. Lopez had always understood “that making people uncomfortable was a critical part of moving the knob.”

“She made a difference for young people who came after her,” he added.

The life of Mrs. Lopez and her voluminous case file — she has filed at least 14 lawsuits against government agencies — reads like a history of a group’s struggle for acceptance.

She’s also been arrested more times than she can count, often for sex work or for violating the vaguely worded and now repealed loitering law sometimes referred to as “walking while trans.” Along the way, she has alienated quite a few fellow activists.

“I won’t work with her,” said Ceyenne Doroshow, the founder of GLITS – Gays and Lesbians Living in a Transgender Society. “I find her problematic, disrespectful and not becoming a black trans leader in the community.”

David France, a filmmaker who was sued by Ms. Lopez over a documentary he was making, said he admired her for her ability to use her personal struggles to effect real change. “She has ways of having catastrophic consequences for really impactful, forward-looking lawsuits,” he said.

Born and raised in the Amsterdam Houses, a public housing complex on the Upper West Side, Ms. Lopez went to foster care at age 9 after losing her drug-addicted mother to AIDS and later her grandmother.

She spent much of her adolescence running away from group homes where, among other things, she was thrown down a flight of stairs and had her nose broken, according to the 1999 lawsuit.

She fled to “Transy House,” a Brooklyn brownstone presided over by transgender icon Sylvia Rivera. She started her own menopause, buying hormones off the street and injecting silicone into her hips and thighs.

At 16, according to court documents, after being kicked out of two homes for gay and transgender youth for misconduct, Ms. Lopez was placed in a Brooklyn boys’ home, whose director issued a memo stating that she “couldn’t wear” “female women.” clothes’ in the facility.” The Administration for Children’s Services supported him.

When Mrs. As Lopez approached 21, when she was due to get out of foster care, she tried to force the city to pay for a gender confirmation surgery. A family court judge found the surgery medically necessary and ruled in her favor, but the city appealed and won.

However, two years later, the city adopted a policy to pay for the surgeries for young people in foster care. Mr Richter, who is now the chief executive of JCCA, a foster care provider, said the shift was “a function of Mariah’s advocacy”.

Even while the surgery case was pending, Ms. Lopez took the city to court again. She sued the police, alleging that she had been assaulted and subjected to groping under the guise of manual “gender checks” during false arrests for loitering.

The city settled for $35,000. Two months later, Mrs. Lopez went to Florida and had her surgery.

In 2017, after receiving her GED and briefly attending college in the state, Ms. Lopez lived with an aunt in Brooklyn. When the aunt died, Mrs. Lopez and her service dog, Chica – Mrs. Lopez suffers from PTSD, anxiety and depression – had nowhere to go.

She sought placement through the Department of Homeless Services at the city’s first shelter for LGBTQ people, Marsha’s House, an 81-bed facility that had just opened in the Bronx. The shelter is named after Marsha P. Johnson, the transgender pioneer. Ms. Lopez has revived and renamed a transgender rights group founded by Ms. Johnson and Ms. Rivera, STARR, for Strategic Transgender Alliance for Radical Reform.

Although Mrs. Lopez was accepted into Marsha’s House, her dog was not. So she filed a lawsuit and a judge ruled in her favor. Mrs. Lopez and Chica moved in, and things went wrong right away.

According to the court papers of Mrs. Lopez made sexual advances and security guards at Marsha’s House, asked to see her genitals, called her abusive names, harassed her into sex and threatened to assault her, then retaliated by filing disciplinary charges after she filed complaints. submitted.

Eric Rosenbaum, the chief executive of Project Renewal, the nonprofit that manages Marsha’s House for the city, said Project Renewal has investigated Ms. Lopez’s claims and found no confirmation, adding that the city had asked Project Renewal to exploit some of the new transgender people. -friendly reception units.

The city transferred Ms. Lopez to a women’s shelter, alleging in court papers that she broke the rules, threatened staff and beat a guard. The women’s shelter had better mental health services and a permanent police presence, the city wrote.

Ms. Lopez declined to go, citing concerns about reprisals and said she would have to choose between being harassed or imprisoned as a transgender woman at a women’s shelter.

As the trial continued, Ms. Lopez evidence that transgender people were mistreated in the city’s reception system. In 2019, she filed another handwritten motion to certify the case as a class action. “This abuse and neglect is widespread and systemic,” she wrote.

The Center for Constitutional Rights, a nonprofit legal advocacy group, joined the lawsuit. It interviewed dozens of transgender people about violent conditions in shelters. Many said they felt so unsafe that they were forced to become homeless again.

“We collected really horrific stories about people being chased from their hiding places, as if people had pitchforks,” said Chinyere Ezie, a lawyer for the center. “People reported that when they put complaints in writing, they saw them being thrown into a ball and thrown into the garbage.”

The city, which initially contested the case, entered into settlement talks aimed at what it called “system reform.”

The settlement allows shelter clients to turn to city attorneys about how shelters respond to their complaints. The city is also required to report to Ms. Lopez every six months on progress in meeting the terms of the settlement. It filed its first report on Tuesday.

“We thank Mariah Lopez for her leadership on this matter,” the Department of Homeless Services said in a statement following the settlement.

On Tuesday, the department said it was “proud of the progress” it had made in adhering to the settlement, “from instructing reception staff to use preferred pronouns and gender markings to create an affirmative environment to developing an accelerated recording process.”

Ms. Lopez has filed five more cases since the homeless shelter, including one seeking compensation from the city for her surgery and another against the city of Albany for not letting her take Chica on a bus.

Her most recent lawsuit is aimed at blocking the construction of a beach along the piers in the West Village, an old hub of transgender black and Hispanic street life, including where Marsha P. Johnson’s body was recovered from the Hudson River in 1992. was taken.

Ms Lopez argued that the project’s impact on a historically important area should be assessed first, saying that if the beach were built, transgender people of color “would be replaced by white cis-hetero sunbathers”.

Mrs. Lopez doesn’t seem to be slowing down. She recalled the first time she set foot in a law firm, when she was 13 and visited Paul, Weiss, the prestigious pro bono firm working on her first lawsuit.

“We were in this huge conference room,” she said. The lawyers had their coats off and their sleeves rolled up with law books open. And I thought, ‘Oh, I think this is what I want to do.’”