The battle to save 80s New York’s extravagant subway entrance 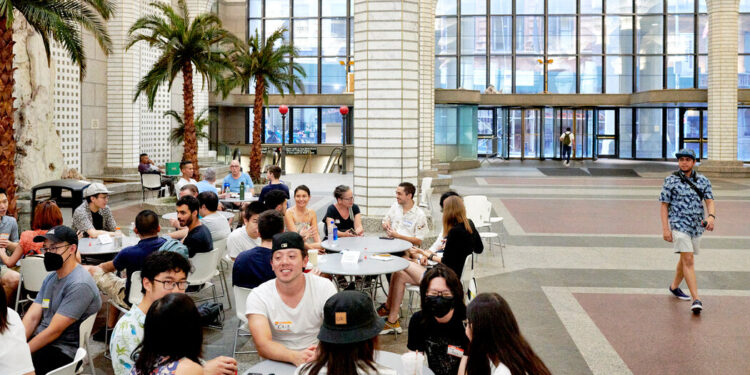 Angular white columns. Dizzying mirrored tile. Lines of palm trees. The atrium at 60 Wall Street, which is also one of New York’s most emblematic subway entrances, feels to some… “like stepping back in time.”

In a city where the typical subway exit unceremoniously puts passengers on a dirty sidewalk, going up the escalator from the dingy train station to the luminous white hall is a real must. But now there’s a plan to ditch this dazzling extravaganza designed in the 1980s and create a sleeker, more contemporary design.

Something about demolishing the atrium, flashy at best and ostentatious at worst, inspires contemplation: what’s worth preserving in a city brimming with history and constantly remaking itself? And are designs from the 80s really historically significant?

“It’s like people are ashamed of the ’80s,” said Rock Herzog, the 38-year-old who runs the wildly popular Twitter account. cocaine decor, where occasionally images of the atrium emerge. “To me, it feels like an attempt to get around New York City’s ‘American Psycho’ period.”

Liz Waytkus of Docomomo US – the US arm of Docomomo International, a nonprofit dedicated to preserving modern buildings – would like to see the space protected. “People said to me, ‘Why are you trying to mark Wall Street 60?’ They find it appalling,” said Ms. Waytkus, who is the organization’s executive director.

She acknowledged that it is sometimes difficult for people to “remove the subjective, you know, your own personal taste”, and view the work as a whole – the design, the details and references.

“There are many buildings from the 1980s in New York City. I don’t think there is a ton of 80’s buildings that should be a landmark. But this is clearly very high on that list,” she said.

The dramatic space, made of Carrara white marble and green granite and finished in 1989, is not just any subway entrance. It is a privately owned public space in a 47-storey skyscraper – 60 Wall Street – that once served as the headquarters of JP Morgan & Company and later became the main New York office for Deutsche Bank.

In September last year, Deutsche Bank left the space and transferred its employees to a downtown address. Now 60 Wall Street is largely vacant, looking for a new tenant. To attract one, real estate investment trust Paramount Group, which owns the building, wants to provide an update.

For those who worked in the building, the atrium was not just a postmodern spectacle. It was also a go-to spot for gossip and banter.

“It was a bit dated. But at the same time it was a great meeting place.” said Ajay Chawdhry, a former vice president at Deutsche Bank. “It had character.”

While he worked there, he used the atrium daily for quick coffee meetings. Even after he gave up his job to work at various banks, he continued to use the atrium as a meeting place.

While the building is not a landmark, it was originally built on the condition that the design has a “harmonious relationship” with 55 Wall Street, the National Historic Landmark across the street. The exterior and interior columns of 60 Wall Street echo that of 55 Wall Street.

Currently, the future of space is unclear. The proposed plans to alter the interior and exterior of 60 Wall Street are under review by the New York City Landmarks Preservation Commission. Consideration is also being given to considering the building and the atrium as a landmark. But being “under assessment” doesn’t prevent construction – or demolition.

60 Wall Street architect Kevin Roche made extremely detailed notes about the building. Writing by hand in 1984, he envisioned the atrium—complete with water flowing over rocks, mounds of greenery, and plenty of seating—to be “well-lit, bright and cheerful.” He also planned for “pockets of peace and quiet – refuges from the hectic pace of everyday life in the neighbourhood.”

Mr Roche, who co-founded Kevin Roche John Dinkeloo and Associates with his partner John Dinkeloo and Associates in 1966, envisioned music programs for lunch visitors and hoped that an art museum would offer rotating sculpture exhibits. The two met while working under famed architect Eero Saarinen before forming their own company together. After Mr. Dinkeloo’s death in 1981, Mr. Roche assumed sole management of the company; in 1982 he was awarded the Pritzker Architecture Prize for his ‘formidable body of work’.

Mr. Roche, who died in 2019, also designed the Ambassador Grill at One United Nations Plaza, which received interior landmark status in 2017, and was the architect of the Ford Foundation’s atrium on East 42nd Street, which will be named New York City landmark in the 1990s.

The new plans for 60 Wall Street, produced by the architectural firm Kohn Pedersen Fox Associates on behalf of Paramount Group, give a completely new picture of the concept of an oasis.

The company’s “redesigned ground-floor experience” will be airy, light-filled and “column-free,” with triple-height windows, a 30-foot green wall, and a skylight, making it look less like a Mediterranean spa and more as a Singaporean airport. The thinking is that these changes “could accommodate a variety of top tenants”.

One of the problems, Ms. Waytkus said, is that the space is not very well maintained. The shops have closed, the falls have stopped running and the original living ficus trees have been replaced with plastic palms. “It just needs a little refresh,” she said.

But even when it was new, the atrium had detractors. In 1990, DailyExpertNews architecture critic Paul Goldberger described it as “a tacky mix of white marble, lots of latticework, mirrors and marble grilles,” writing that “the overall effect is oddly slick, almost feminine, like an ice cream parlor blown up.” to monumental scale.”

Still, there are those who were born in the ’80s or were children in the ’80s who love the distinctive atrium as it is today and can only see what would be lost.

“It feels like this 80s vision of New York, which as Kansan I’ve only seen in movies. It feels like a little piece of that, somehow untouched,” said Gavin Snider, 36, a Brooklyn-based artist who created an impressionistic ink and colored pencil sketch of the atrium in 2019. He moved to New York in 2015 and often stops in the atrium for a quiet break.

Ms. Waytkus agrees: “It’s magical. It’s dazzling. It will elicit a response. It is not a passive design.”

“At the same time, it’s quiet,” she said. “It’s a little piece of ‘Miami Vice’ right there on Wall Street.”

“They say: we want to make it a place where people want to meet. But why wouldn’t people meet in a giant ice cream parlor?” asked Max. Herzog, who prefers to use a gender-neutral honorary title. “Does it have to be timeless to be preserved?”

Reached recently by phone, Mr. Goldberger, 71, who had called the space “frilly” and likened it to an ice cream parlor, admitted he’d been “a little snarky.”

“I’d rather see it saved than turn into something that would just be another modern office lobby,” he said. “As time has gone by, I realize it’s one of the few significant interiors from the era.”

Ms. Waytkus and her colleagues agree. “Hopefully we don’t lose it,” she said.