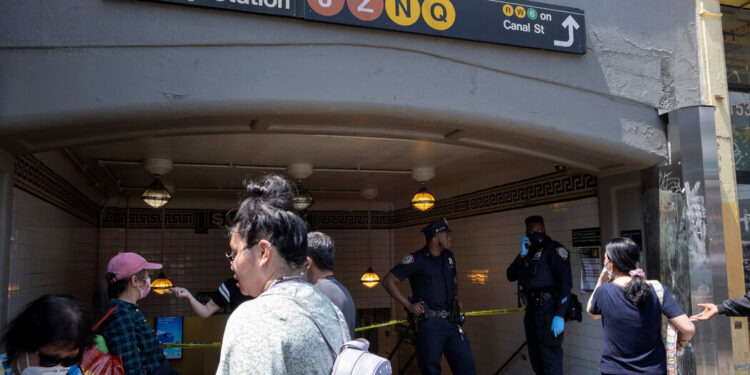 The search for a gunman who killed a man on a subway in lower Manhattan continued Monday, when New York police released the first known photos of the suspect.

“We need all eyes on this,” Police Commissioner Keechant Sewell wrote on Twitter early Monday, along with two photos of the person who, police say, pulled out a gun and fatally shot a commuter in an unprovoked attack on Sunday.

The suspect had boarded a northbound Q train when he shot Daniel Enriquez in the chest around 11:40 a.m. When the train doors opened on the Canal Street platform, the gunman fled just as officers entered the station.

Mr Enriquez, 48, a Brooklyn man who worked for Goldman Sachs and was on his way to brunch, was rushed to Bellevue Hospital, where he died.

She added that detectives needed help to “identify and locate this man wanted for murder in the tragic, senseless shooting.” David Solomon, the chief executive officer of Goldman Sachs, said in a statement Monday that Mr. Enriquez “was a devoted and beloved member of the Goldman Sachs family for nine years.”

“We are devastated by this senseless tragedy and our deepest condolences go out to Dan’s family at this difficult time,” said Mr. Solomon.

The attack is the latest in a series of violent episodes in the city’s subways this year, including a shooting last month that left at least 23 people injured, as well as the death of a woman at a Times Square station in January after being hit on the street. was pushed to the ground. tracks.

Such incidents have been a huge hurdle for Mayor Eric Adams, who has repeatedly vowed to curb violence on New York City’s streets and trains.

On Monday morning, some commuters at the Canal Street station expressed deep concern for their safety while riding on a system that has long been the bloodstream of the city and its economy.

“It’s really scary out there,” said Dominique Lachelle, as she waited for a Q train on the platform uptown where the police had tried unsuccessfully to resuscitate Mr. Enriquez.

Ms. Lachelle, 29, who lives in Brooklyn and is a front desk clerk at a hospital, said the spate of violent incidents has influenced even the smallest of her decisions, such as whether to sit down on her drive to work.

“I now get up and get close to the doors so I can escape to another car if I need to,” she added. “I don’t want to be caught in the middle.”

Born in Williamsburg to parents who emigrated from Mexico, Mr. Enriquez is the oldest of his three siblings. He is the fourth person this year to have died in transit. Despite the focus on recent violence, deadly attacks on public transport in the city are far less frequent than on city streets. Major crimes on buses and trains make up just 2 percent of total city crime – the same level as before the pandemic – although passenger numbers are only about 60 percent of what it was before the coronavirus.

Still, some New Yorkers at the Canal Street station on Monday said public transportation was their only financially viable option for getting around the boroughs.

“There’s no getting around it because it’s going to be expensive to take Uber,” said Hek Emra, 25, a Queens concierge. “What can you do? You can’t help it.”