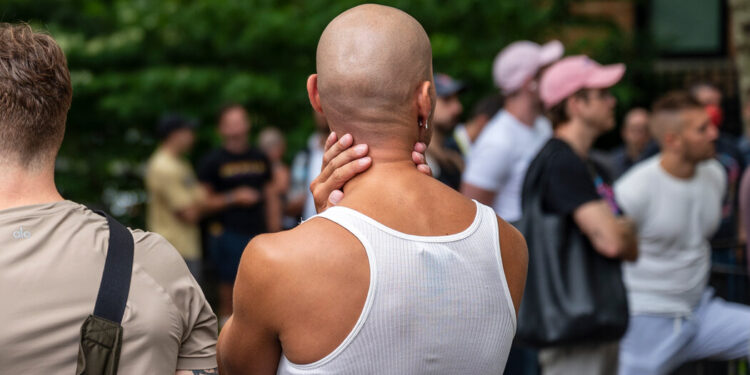 For LGBTQ people in New York City, the last Friday in June is usually a joyous day. The streets come alive with the telltale signs of a festive weekend: music, dancing, kissing, the occasional trail of glitter confetti.

But this year, on the eve of the city’s biggest Pride events, the vibe was different. Friday morning’s news of the Supreme Court’s decision to annul Roe v. Wade immediately changed the tenor of the weekend’s events. In many circles, group chats that days before had been all about party planning switched to coordinating protest plans. Further complicating people’s attitudes towards the weekend are questions and concerns about monkeypox, a virus that disproportionately affects gay men.

On Thursday, New York City health officials expanded access to a monkeypox vaccine and offered it to men who have had multiple or anonymous male sexual partners in the past 14 days. As of Friday, 39 people in New York City had tested positive for the orthopox virus, according to the Department of Health and Mental Hygiene, which added that all 39 cases were considered monkeypox.

According to the World Health Organization, monkeypox is transmitted from person to person through close contact with lesions, bodily fluids, respiratory droplets and contaminated materials. The virus usually begins with flu-like symptoms, such as fever and swollen lymph nodes, and progresses to a painful rash.

While anyone can contract the virus, it currently spreads primarily through communities of men who have sex with men, officials said.

As photos of long lines of people waiting to be vaccinated at a Manhattan sexual health clinic circulated on social media, and as news of monkey pox cases spread around the world, some New Yorkers began to rethink their plans for Pride weekend. .

Joseph Osmundson, a clinical assistant professor of biology at New York University and a health care advocate, said growing concerns about monkey pox had affected the Pride plans of “almost everyone” he knew.

“Everything from, if you go to a circuit party, you go in the middle of the dance floor or you go more to the side, to the kind of sex you have,” Dr. Osmundson, 39, said in a telephone interview.

He said he thought people generally “made risk-conscious decisions” while still making room for “sociability, fun, community, and getting out of the house.”

Finley King, 24, a film production assistant, said both monkey pox concerns and the Roe news affected his plans for this weekend, but he would feel relatively comfortable attending a protest and standing on the sidelines, or go to an outdoor party.

“As for worry, I’m on a scale of 4 out of 10 on the panic scale†he said, adding that he hadn’t seen many of his friends talking about the disease. “I’d say it’s mostly people my age, either they know about monkey pox and they don’t care, or they don’t know about it at all.”

Outside the Stonewall Inn in Greenwich Village on Friday, Rusty Fox, 59, said the minor concern he felt about monkey pox was probably just residual fear of the coronavirus pandemic.

“I’m a little paranoid just because we have Covid chasing us,” he said. “So that paranoia is kind of trickling down.”

Michael Donnelly, a data scientist, expressed frustration that this year’s Pride festivities were colored by another virus after the pandemic significantly derailed the celebrations of the past two years.

“I’m proud that we have a community that communicates about our health, about science, and is willing to get vaccines to keep ourselves and our communities safe,” he said.

This month, the Centers for Disease Control and Prevention released guidelines to reduce the chances of monkey pox, noting that festivals, concerts and other events where attendees were likely to be fully clothed were safer than spaces, including raves, saunas and sex clubs, where minimal clothes were worn.

Some, like Chris Pierce, 26, were convinced that their personal precautions were sufficient.

“It’s definitely something people should be concerned about, especially if we’re in closed doors and walls,” he said, “but staying outside is probably my number 1 goal this weekend.”

The only New York facility that administers the vaccine, the city-run Chelsea Sexual Health Clinic in Manhattan, had to start turning people away almost immediately after opening vaccination to eligible New Yorkers on Thursday.

As for his plans for this weekend, Mr Donnelly said he was “one of the lucky few to get a vaccine, so I feel a certain amount of extra security because of that.”

Jonathan Valdez, 36, a content creator and podcast host, said a friend of his first told him he was happy to miss New York City Pride, citing concerns about monkey pox. “A lot of people are worried that after this weekend,” Mr. Valdez said, “the numbers will go up a lot.”