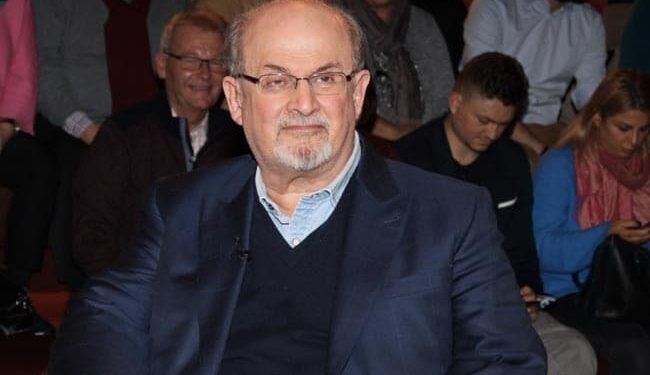 Salman Rushdie was attacked minutes before he was due to give a lecture at an event on Friday.

British author Salman Rushdie, whose writings have made him the target of Iranian death threats, underwent emergency surgery Friday after an attacker stabbed him in the neck during a literary event in upstate New York.

Police said a male suspect stormed onto the stage and assaulted Rushdie and an interviewer, leaving the writer with “an apparent stab wound to the neck”.

Rushdie was taken to hospital by helicopter and operated on, his agent Andrew Wylie said in a statement on Twitter, promising to provide an update on his condition as soon as possible.

On social media, people could be seen providing medical assistance immediately after the attack on the stage. The interviewer also suffered a head injury.

A suspect was detained by state police, who did not provide direct details about his identity or suspected motive.

The attack happened as Rushdie was about to give a speech at the Chautauqua Institute, which hosts arts programs in a quiet lakeside community 70 miles (110 kilometers) south of the city of Buffalo.

New York Governor Kathy Hochul condemned the stabbing and praised Rushdie as “a person who has been telling the truth to power for decades.”

“We condemn all violence and we want people to feel (the) freedom to speak and write the truth,” she said.

Rushdie, 75, came into the limelight with his second novel “Midnight’s Children” in 1981, which won international acclaim and the prestigious British Booker Prize for his portrayal of India after independence.

But his 1988 book “The Satanic Verses” took the spotlight beyond his imagination when it led to a fatwa, or religious decree, calling for his death by Iranian revolutionary leader Ayatollah Ruhollah Khomeini.

The novel was regarded by some Muslims as disrespectful to the prophet Muhammad.

Rushdie, who was born in India to non-practicing Muslims and today identifies as an atheist, was forced to go underground when a bounty was put on his head – which it still is today.

He received police protection from the British government, where he attended school and where he made his home, following the murder or attempted murder of his translators and publishers.

He was in hiding for nearly ten years, moving repeatedly and unable to tell his children where he lived.

Rushdie only began to flee from his life in the late 1990s after Iran said in 1998 it would not support his assassination.

He now lives in New York and is an advocate for free speech, most notably launching a strong defense of French satirical magazine Charlie Hebdo after its staff was gunned down by Islamists in Paris in 2015.

The magazine had published drawings of Mohammed that provoked outrage from Muslims around the world.

Threats and boycotts continue against literary events Rushdie attends, and his knighthood in 2007 sparked protests in Iran and Pakistan, where a minister said the honor justified suicide attacks.

The fatwa failed to suppress Rushdie’s writing and inspired his memoir “Joseph Anton”, named after his alias while in hiding and written in the third person.

“Midnight’s Children” – spanning more than 600 pages – has been adapted for the stage and the silver screen, and his books have been translated into more than 40 languages.

Suzanne Nossel, head of the PEN America organization, said the free speech advocacy group “was reeling with shock and horror.”

“A few hours before the attack, on Friday morning, Salman had sent me an email to assist with placements for Ukrainian writers who need a safe haven from the grave dangers they face,” Nossel said in a statement.

“Our thoughts and passions now lie with our intrepid Salman and wish him a full and speedy recovery. We fervently hope and believe that his vital voice cannot and will not be silenced.”

Chuck Schumer, a New York senator, called the attack “an attack on the freedom of expression and thought, two fundamental values ​​of our country.”

“I hope Mr Rushdie makes a speedy and full recovery and that the perpetrator experiences full responsibility and justice,” he said.