Passengers jump off ferry that catches fire in Philippines, kills 7 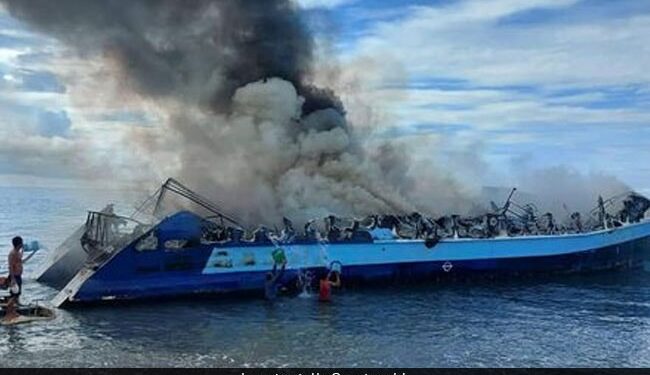 After the fire started, it took nearly five hours to get it under control.

A Philippine ferry with 157 people on board caught fire earlier this week just before reaching a port 60 kilometers east of the capital Manila. The Coast Guard shared several photos of people in life jackets floating in the sea, waiting to be rescued. In the background, thick smoke billows from the two-story passenger ship.

INCIDENT REPORT: The @coastguardph responded to a maritime incident involving MV MERCRAFT 2, a high-speed craft that reported a fire on board today, May 23, 2022, in nearby waters off Real, Quezon. pic.twitter.com/FItWkxtNdR

While the cause of the fire is still unknown, 5 women and 2 men were killed and 120 passengers were rescued, 23 of whom were treated for injuries, the Coast Guard said in a statement.

A ferry carrying more than 130 people caught fire in the northeast of the Philippines. 7 passengers died, 120 people were rescued from the water. #BREAK#tuesdayvibepic.twitter.com/oSiV8T1URl

The ship had departed from Polillo Island, which is located in the northeast of the archipelago, and was due to anchor near the town of Real. The ship caught fire around 5 a.m. local time and an emergency call was made to authorities at 6:30 a.m. local time. After the fire started, it took nearly five hours to get it under control. The incident is under investigation, the Philippine Coast Guard confirmed in a statement.

This is to clarify the total number of people affected during the fire aboard the MV MERCRAFT 2 in the nearby waters of Real, Quezon, on May 23, 2022. pic.twitter.com/2zdo3IBTrv

Initially, there were some conflicting reports about the number of people on board the ship. However, the Coast Guard provided clarification in a statement on Twitter, saying: “This is to clarify the total number of people affected during the fire incident on board MV MERCRAFT 2 in the nearby waters of Real, Quezon, on May 23, 2022.”

“According to the @coastguardph Station Northern Quezon, data collected during the investigation yesterday, May 24, 2022, revealed that there were 157 INDIVIDUALS ON BOARD THE HEAT SHIP instead of 134 individuals as previously reported.”