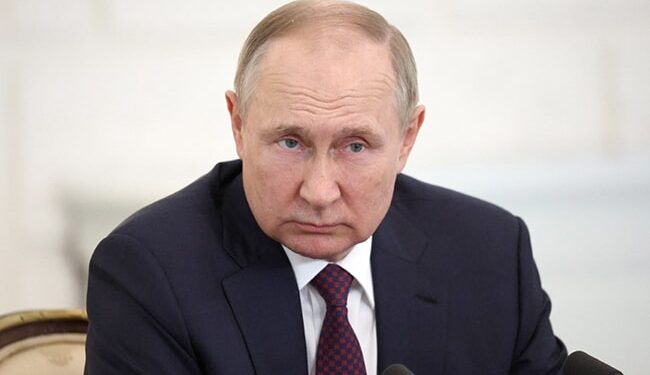 Vladimir Putin reportedly fell down five steps before landing on his tailbone. (File)

Russian President Vladimir Putin reportedly fell this week at his official residence in Moscow, causing him to “defecate involuntarily,” the New York Post reported, citing a Telegram channel with clear ties to his security team.

The report added that Putin, 70, reportedly fell down five steps before landing on his tailbone.

The impact caused the Russian president to “poop involuntarily” due to “cancer affecting his stomach and intestines,” according to the Telegram channel.

During a meeting with his Cuban counterpart Miguel Diaz-Canel last month, Putin’s hands appeared to shake and turn purple, the UK-based Express reported.

The UK-based outlet went on to say that the Russian leader moved his legs awkwardly.

The incidents are another addition to the growing speculation about Putin’s declining health. A former British spy said the 70-year-old president is “seriously ill” and that it is “part of what is happening in Ukraine”.

An oligarch with close ties to the Russian leader claimed that “Putin is very sick with blood cancer.”

It is not the first time that reports have surfaced that Putin is ill. In 2014, President Putin’s spokesman mocked reports in the US media that the leader was suffering from cancer and told journalists to “shut up”.

Putin has said she has no regrets about launching Russia’s “special military operation” against Ukraine, which began nearly 10 months ago.

Shilpa Shetty and son Viaan step out in style in Mumbai