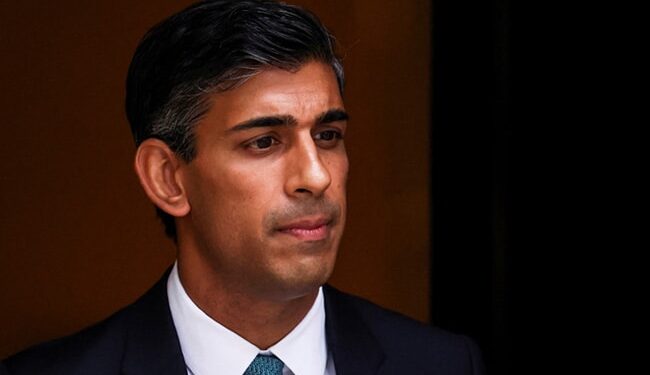 British Prime Minister Rishi Sunak warned on Monday that China posed a “systemic challenge” to the UK’s “values ​​and interests” as his government condemned Beijing after a BBC journalist said he was beaten while covering the Shanghai protests.

In his first major foreign policy speech, Sunak said the so-called “golden era” of UK-China relations heralded by former Prime Minister David Cameron was over, along with the naive idea that trade would automatically lead to social and political reform.”

Britain should therefore “evolve our approach to China,” he said in his speech at the Lord Mayor’s Banquet in London.

“We recognize that China poses a systematic challenge to our values ​​and interests, a challenge that becomes more acute as it moves toward even greater authoritarianism,” he said.

“We cannot simply ignore China’s significance in world affairs – for global economic stability or issues such as climate change. The US, Canada, Australia, Japan and many others understand this as well.

“So together we will face this fierce competition, also with diplomacy and commitment,” he added.

His government will prioritize deepening trade and security ties with Indo-Pacific allies, he said, adding that “economics and security are indivisible” in the region.

While unlikely to please Beijing, Sunak’s message was somewhat watered down from those on the campaign trail when he called China the “number one threat” to domestic and global security.

The speech came as tensions between the two nations continued to rise after Ed Lawrence, who worked in China as an accredited BBC journalist, was arrested during a Covid lockdown protest in Shanghai and held for several hours.

The British broadcaster says he was assaulted and kicked by the police.

Following his release, Lawrence tweeted Monday to thank his followers, adding that he believed “at least one local national had been arrested after trying to stop police from beating me”.

“Media freedom and freedom to protest must be respected. No country is exempt,” he tweeted.

“Journalists must be able to do their job without harassment.”

Sunak stressed that the media “should be able to cover these issues without sanctions, including exposing abuses in Xinjiang – and the curtailment of freedom in Hong Kong.”

“China’s attempts at state repression here in the UK remind us of the urgent need to defend our own freedoms,” he said, after reports emerged that China was operating undeclared police posts abroad, including Britain.

Hundreds of people took to the streets of China’s major cities on Sunday in a rare display of public anger against the state for its zero-Covid policy.

The BBC said it was “extremely concerned” after Lawrence was filmed being taken away from one of the Shanghai protests.

“We have not received any official statement or apology from the Chinese authorities apart from a claim by the officials who later released him that they had arrested him for his own good in case he caught Covid from the mob,” it said.

“We do not consider this a credible statement.”

China’s foreign ministry said on Monday that Lawrence had not identified himself as a journalist.

“Based on what we have learned from the relevant authorities in Shanghai, he did not identify himself as a journalist and did not voluntarily present his press credentials,” Foreign Ministry spokesman Zhao Lijian said.

He told international media to “follow Chinese laws and regulations while in China”.

Historic uprising in China, the first ever since the Tiananmen Square protests