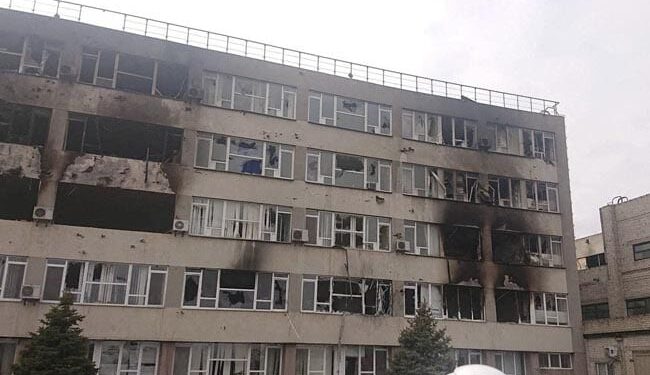 Kiev and Moscow accused each other of attacking Europe’s largest nuclear site on Friday, causing a reactor shutdown as three grain ships left Ukraine under a deal to avoid food shortages.

Russian forces have occupied the Zaporizhzhya nuclear power plant in southern Ukraine since the early days of their invasion and Kiev has accused them of stockpiling heavy weapons there. Moscow, in turn, has accused Ukrainian troops of targeting the factory.

“Three strikes have been registered on the site of the plant, near one of the energy blocks where the nuclear reactor is located,” Energoatom, the operator of Ukraine’s state-run nuclear power plant, said in a statement.

“There are risks of hydrogen leakage and radioactive spraying. The fire risk is high,” Energoatom said. It made no mention of casualties.

It said personnel from Russian nuclear operator Rosatom had rushed out of the plant before the attacks, damaging a power cable and forcing one of the reactors to stop working.

Ukrainian President Volodymyr Zelensky said in his daily video address that Russia “must take responsibility for being a threat to a nuclear power plant”.

“Today, the occupiers have created another extremely risky situation for the whole of Europe: they have attacked the Zaporizhzhya nuclear power plant twice. Any bomb attack on this site is a blatant crime, an act of terror,” he said.

Ukraine’s foreign ministry said earlier that the “possible consequences of hitting a working reactor are equivalent to using an atomic bomb”.

The Ministry of Defense in Moscow denied the reports.

“Ukrainian armed units have carried out three artillery strikes on the territory of the Zaporizhzhya Nuclear Power Plant and the city of Energodar,” a statement said.

Putin thanked Erdogan for helping organize the resumption of Ukrainian grain shipments, the first of which will arrive in Lebanon on Sunday, according to the Ukrainian embassy in Beirut.

Sierra Leone-flagged bulk carrier Razoni departed from the Ukrainian port of Odessa on Monday with 26,000 tons of corn — the first departure under a UN-backed deal brokered with Turkish aid to alleviate the global food crisis.

Kiev said three more ships loaded with grain from Ukraine left on Friday for Turkey and markets in Ireland and Britain. Another 13 waiting to leave.

“The deliveries have already started. I would like to thank you, both for this and for the simultaneous adoption of an accompanying decision on uninterrupted deliveries of Russian food and fertilizers to world markets,” Putin told Erdogan in Sochi.

Asli Aydintasbas, a fellow at the European Council on Foreign Relations, wrote in a report last week that the war in Ukraine had “restored Turkey’s self-image as a major geopolitical player” and gave Erdogan a higher profile than at any time in recent years. . .

The Turkish leader wants to translate the success into ceasefire talks in Istanbul between Putin and Zelensky.

Moscow, meanwhile, announced Friday that it is imposing a travel ban on 62 Canadian citizens, including government officials.

The Russian Foreign Ministry said the list includes figures known for “their evil activities in the fight against the ‘Russian world’ and our traditional values”.

A controversy has sparked in Ukraine over allegations that it is violating international law and endangering civilians in its fight against the Russian invasion.

Amnesty International released a report Thursday listing incidents in 19 cities and towns where Ukrainian forces appear to have endangered civilians by establishing bases in residential areas.

President Zelensky equated the charges with the victim’s guilt. In his evening speech on Thursday, he said the rights group had tried to “offer amnesty to the terrorist state and shift responsibility from the aggressor to the victim”.

“There is no condition, not even hypothetical, under which a Russian attack on Ukraine is justified. Aggression against our state is unprovoked, invasive and terroristic,” he added.

“If someone makes a report that the victim and the aggressor are somehow equal… that cannot be tolerated.”

Amnesty said a four-month investigation revealed that the Ukrainian military had established bases in schools and hospitals and carried out attacks from populated areas.

It said the tactics violated international humanitarian law and rejected criticism of the report.

“The findings were based on evidence gathered during extensive investigations, which were subject to the same rigorous standards and due diligence processes as all of Amnesty International’s work,” Secretary-General Agnes Callamard told AFP in email comments.

Mykolaiv is on the main route to Odessa, Ukraine’s largest port on the Black Sea, and is the closest city to the southern front.

Several rockets hit the city of Zaporizhzhya overnight and there was heavy bombing of Ukraine’s second city, Kharkiv, in the northeast.

Ukrainian forces are waging a counter-offensive in the south, where they claim to have recaptured more than 50 villages previously controlled by Moscow.