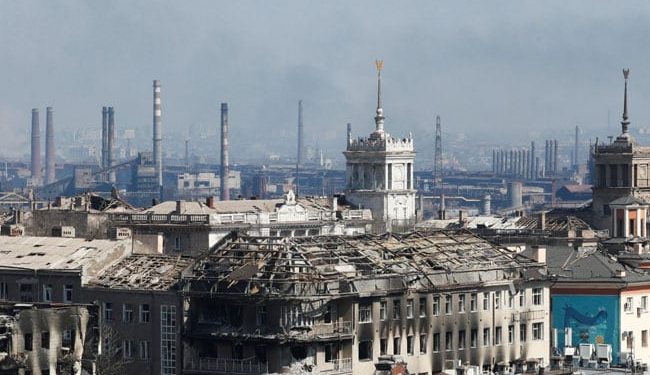 Ukraine said on Thursday that Russia was trying to destroy its remaining soldiers holed up in Mariupol’s Azovstal steel plant, while Kiev’s last defenders in the battered city said Moscow troops had penetrated the giant factory.

“Russian occupiers are targeting blocking and destroying Ukrainian units in the Azovstal area,” the Kiev military said in a statement.

“With the support of aircraft, Russia resumed the offensive to take control of the factory.”

The statement came as a ceasefire announced by Russia was to begin at the besieged factory, where hundreds of Ukrainian soldiers and some civilians have been trapped for weeks.

A commander of the Azov battalion, which leads the defense of Mariupol, said late Wednesday that Russian soldiers broke into the factory and that there had been “ongoing, bloody fighting”.

“For two days, the enemy has penetrated the fence of the steel plant,” Azov commander Denys Prokopenko said in a video posted to Telegram.

“The situation is extremely difficult, but nevertheless we continue to carry out the order to hold the defence.” He said Ukrainian units “resisted” while outnumbered by the Russians.

Ukrainian President Volodymyr Zelenskky on Wednesday asked UN chief Antonio Guterres to “rescue” his units in Azovstal and called for “the removal of all wounded”.

The Ukrainian leader later said in a separate video speech that civilians – “women and children” – are still trapped in Azovstal and that Kiev was “negotiating” to rescue them.

“It takes time to just lift people out of these underground shelters,” he said.

“In the current circumstances, we cannot use special equipment to clear the debris. Everything is done manually.”

“Now we are fighting for the rescue of every person, every resident of Mariupol,” he said on Telegram.

Another 344 Ukrainians were evacuated from Mariupol and the surrounding area late on Wednesday.