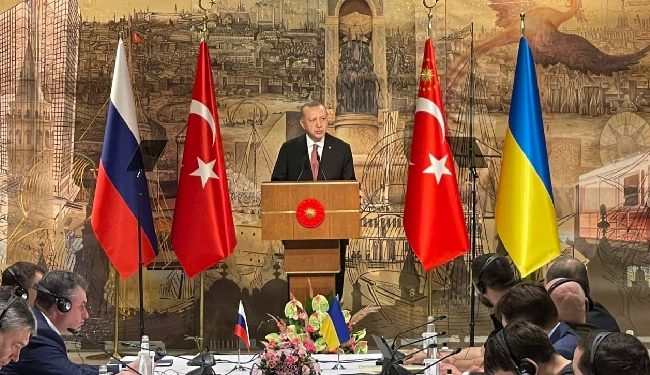 Turkey seeks good relations with both

The face-to-face talks at Istanbul’s Dolmabahce Palace are aimed at ending the war that has killed an estimated 20,000 people and displaced more than 10 million from their homes.

“The two sides have legitimate concerns. It is possible to reach a solution acceptable to the international community,” President Erdogan said.

“It is up to the two sides to end this tragedy,” he stressed, adding that “the prolongation of the conflict is in no one’s interest”.

“The whole world is waiting for good news from you,” he continued.

Turkey previously hosted on March 10 the first meeting between Ukrainian and Russian foreign ministers following the Russian invasion of Ukraine on February 24.

Those talks in the southern city of Antalya have not led to a ceasefire or any other visible progress.

On Monday evening, President Erdogan said his country is the only country since Russia’s 2014 annexation of Crimea that has made genuine efforts to find a solution to the crisis through dialogue, negotiations and an agreement.

Turkey, which shares a Black Sea coast with both Russia and Ukraine, aims to maintain good relations with both and has offered to mediate since the start of the war.

Ankara is a traditional ally of Kiev and has supplied the country with Bayraktar drones, which Ukraine has deployed in the conflict.

But it is also trying to stay on good terms with Russia, on which Turkey relies heavily for gas imports and tourism revenues.

Turkey is also partnering with France and Greece on a “humanitarian operation” to evacuate people from the ruined Ukrainian port city of Mariupol, which has been crushed by Russian forces.