Russians who fled military conscription are in no hurry to return 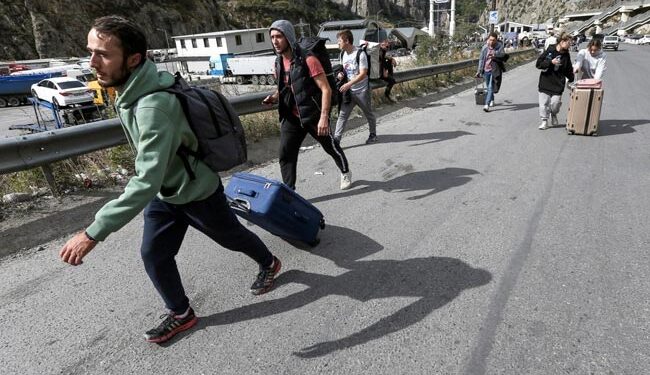 Russia announced the call on September 21 after battlefield setbacks.

A month after Russia said it had ended a recruitment campaign for its war in Ukraine, men who fled to neighboring Georgia to avoid conscription say they are in no rush to return home.

Russia announced the call-up on Sept. 21 following battlefield setbacks — a move that prompted hundreds of thousands of conscripted men to head to Georgia, Armenia and Kazakhstan, among others, to avoid being sent to the front.

More than 110,000 Russians have fled to Georgia this year, Georgia government statistics show – an influx that has fueled both an economic boom and resentment in a country where anti-Russian sentiment is rife.

Although Russian President Vladimir Putin and his Defense Minister Sergei Shoigu announced the end of the call a month ago, many say they are unlikely to return home anytime soon.

“First and foremost, the conflict must end,” said Emil, a 26-year-old game developer who queued for two days at the border to leave Russia.

“It has reached a point where everyone is at risk – especially men… I put my safety first. Of course I don’t want to return to a country where the police can arrest me for just walking past them. I want freedom, to keep you safe to feel,” he said in an interview in Tbilisi.

The Kremlin’s refusal to cancel an official decision to mobilize has fueled fears that further calls could be announced without warning.

“I have a very vague idea of ​​​​what would have to happen in Russia to want to go back there. But for now, I rented an apartment in Tbilisi for six months and registered a company. I will be here for the next six months,” says Slava, a 28-year-old who also works in the mobile games industry.

“I will keep an eye on what is happening in Russia. Of course I would love to go back because – apart from certain aspects – I liked it there and I love Russia.”

Yet the arrival of so many relatively prosperous Russians in a relatively poor country of only 3.7 million has created tensions.

“There is a perception in society that the situation is getting out of hand,” said opposition lawmaker Salome Samadashvili, speaking in front of a Ukrainian flag in her office.

Russian-backed separatists control two breakaway regions of Georgia: Abkhazia and South Ossetia. In 2008, Moscow said they were threatened by the Georgian government and briefly invaded other parts of Georgia.

Samadashvili said she fears Putin could use the pretext of “protecting” the Russians in Georgia as a reason for another invasion, just as he did in Ukraine.

In what has become a popular song of protest, many Georgians say they consider one-fifth of their land occupied by Russia.

Many of the Russian arrivals — who oppose both the war and Putin’s repression domestically — are sympathetic to that message, and some are stepping up.

“We decided to move … so that we can feel more free,” says Denis Shebenkov, an entrepreneur who moved to Tbilisi in March.

“When I remember how the police in St. Petersburg behave, or what the city council and government do, I don’t want to go back there at all,” he said.

Arvind Kejriwal’s appeal to youth, women in Gujarat ahead of the polls