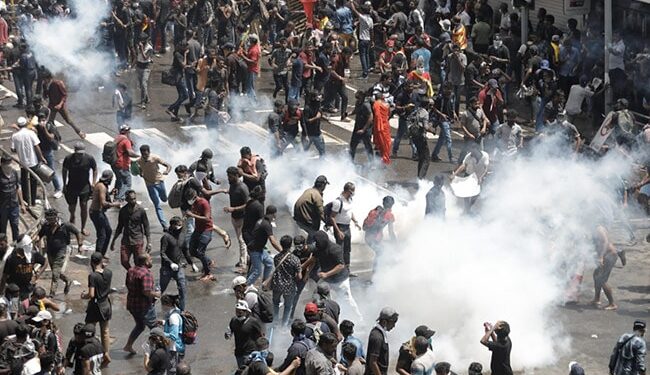 The demonstrations began on April 9 in protest against shortages of essential supplies. (File)

Protesters in Sri Lanka who overthrew the previous government announced they would dismantle their main demonstration site near the president’s office on Wednesday after a crackdown on their leaders.

The group led by university students and left-wing parties said they were clearing their tents along Galle Face boulevard in the capital.

A spokesman said they had also withdrawn four legal proceedings against a police order to leave the area that claimed their tents were a barrier to nearby hotels.

Activists were seen tearing down their tents and tearing down other structures they had set up to support their fight against the government.

The demonstrations started on April 9 in protest against shortages of essentials such as fuel, food and medicines during the worst economic crisis in Sri Lanka.

They peaked when tens of thousands poured into Colombo and overran Gotabaya Rajapaksa’s presidential palace on July 9, forcing him to flee and eventually resign.

Days after Rajapaksa fled to Singapore and announced his resignation, troops expelled protesters occupying the palace and the prime minister’s home and office.

Security forces were accused of using excessive force to disperse the protesters, with more than 80 people suffering injuries that required hospitalization.

Since then, dozens of activists have been arrested on charges of damaging state property.

A top union leader, Joseph Stalin, was released on bail Monday following international criticism over his arrest last week on charges of causing $90 in damages.

Rajapaksa’s successor, Ranil Wickremesinghe, has distinguished between “protesters” and “rioters” and vowed harsh measures against “all troublemakers”.

Shortly after protesters flooded the palace, there were social media posts of them frolicking in the pool and bouncing on four-poster beds in the sprawling grounds.

But protesters also transferred about 17.5 million rupees ($46,000) to authorities in cash found in one of the rooms.