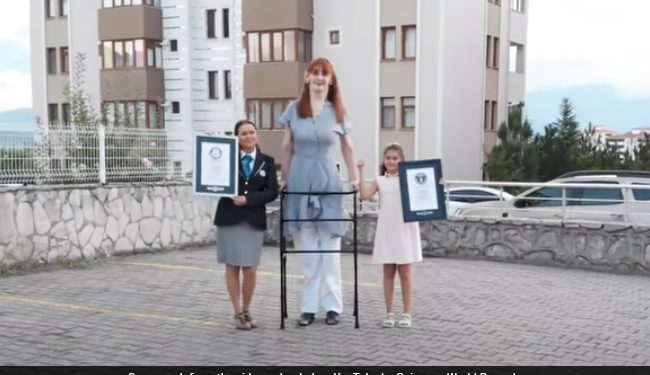 Rumeysa Gelgi, named the tallest woman in the world by Guinness World Records (GWR), has now broken three additional records. The Turkish woman is now the proud holder of five world records, according to GWR.

According to a February 2022 verification and confirmed by GWR, its record-breaking features for three additional records include:

Ms. Gelgi (born January 1, 1997) is a lawyer, researcher and front-end developer who holds the Guinness World Record for the longest living woman in the world since October 2021.

Her most recent measurement revealed she stands at a towering 215.16cm (7ft 0.7in) and her worldwide popularity has also reached dizzying heights.

There is a video posted by GWR on YouTube where she can see how she explains about herself and the illness she got at birth.
“I was bullied a lot as a kid, but one of the benefits of being tall is that you can hold Guinness World Records,” she said.

“I received my first record title in 2014 as a teenager and I have been using her title for advocacy ever since, so I am grateful to them,” Ms Gelgi added.

Ms Gelgi normally moves in a wheelchair due to her disability and can only walk for a short time.