Timeline: The Gorbachev era and the collapse of the Soviet Union 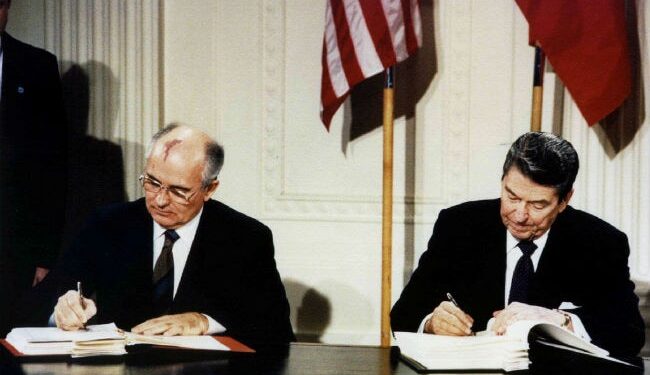 Gorbachev and US President Ronald Reagan hold their first summit in Geneva in November 1985.

Here’s a timeline of some key events during the nearly seven years that Mikhail Gorbachev, who died Tuesday at age 91, was in power in the Soviet Union.

March 1985 – Mikhail Sergeevich Gorbachev, the youngest member of the Politburo at 54, becomes General Secretary of the Communist Party after the death of Konstantin Chernenko. He is launching a program of perestroika (restructuring) and glasnost (openness) to lift the country out of political and economic stagnation.

Nov 1985 – Gorbachev and US President Ronald Reagan hold their first summit in Geneva; Gorbachev says he is “”very optimistic” about detente and future cuts to weapons.

Dec 1986 – dr. Andrei Sakharov, the father of the dissident movement, is released from exile after a phone call from Gorbachev – one of hundreds of political and religious dissidents released during his rule.

October 1987 Prominent Russian reformer Boris Yeltsin clashes with Gorbachev over the pace of perestroika and leaves the ruling Politburo.

Dec 1987 – Gorbachev and Reagan sign the first treaty to reduce Washington’s nuclear arsenals. All Soviet and US medium-range missiles must be dismantled.

October 1988 – Gorbachev consolidates power by becoming chairman of the Presidium of the Supreme Soviet, the national legislature.

March 1989 – Soviet Union holds first competitive multi-candidate election to elect Congress of People’s Deputies. Many prominent old guard communists lose to independents, and separatists win the majority of the seats in the Baltic republics of Estonia, Latvia and Lithuania.

Nov 1989 – Popular revolutions drive out communist governments in East Germany and the rest of Eastern Europe. The Soviet Union makes no attempt to intervene if its satellite regimes fall.

Dec 1989 – Gorbachev and US President George HW Bush greet the end of the Cold War during a summit in Malta.

February 1990 – The communist party is giving up its guaranteed monopoly of power. Parliament agrees to give Gorbachev an executive presidency, with a significant increase in powers. Pro-reform protesters hold huge rallies in the Soviet Union.

October 1990 – East and West Germany unite after intense six-power negotiations in which Gorbachev plays a key role. The Soviet Parliament approves the plan to abandon the communist central planning of the economy in favor of a market economy. Gorbachev receives the Nobel Peace Prize.

Nov 1990 – Parliament authorizes Gorbachev to issue decrees in almost all sectors of public activity. The first draft of a Union treaty proposed by Gorbachev gives significant powers to the 15 republics, but four – Latvia, Lithuania, Estonia and Georgia – refuse to sign.

January 1991 – Troops crush pro-independence demonstrations in the Baltic states, killing 14 in Lithuania and five in Latvia.

August 19, 1991 – Citing Gorbachev’s alleged ill health, his deputy Gennady Yanayev takes over as president at the head of the hardline communist junta. State of emergency declared in some areas. Estonian parliament declares independence.

August 21 – The coup collapses, destroying the conservative caucus in the middle and giving a huge boost to separatists in republics. Latvian parliament declares independence.

August 24 – Gorbachev resigns as leader of the Communist Party, orders state confiscation of her property, bans her from all state organizations and proposes to dissolve herself. Ukrainian parliament declares independence. Within weeks, everyone except Kazakhstan and Russia did the same.

September 6 – The highest Soviet legislature recognizes the independence of Lithuania, Latvia and Estonia. Congress repeals the 1922 Union Treaty and hands power over to an interim authority pending signature of the Treaty for a Voluntary Union of Sovereign States.

Nov 16 – Russia takes control of almost all Soviet gold and diamond reserves and of oil exports. Later it announces the takeover of economic ministries.

Dec 8 – Russia, Ukraine and Belarus declare the Commonwealth of Independent States without a role for a central authority or Gorbachev. At first he resists new order and refuses to resign. Slowly he comes to accept the inevitable.

Dec 25, 1991 – Gorbachev resigns as president of the Soviet Union, which is formally dissolved the following day.