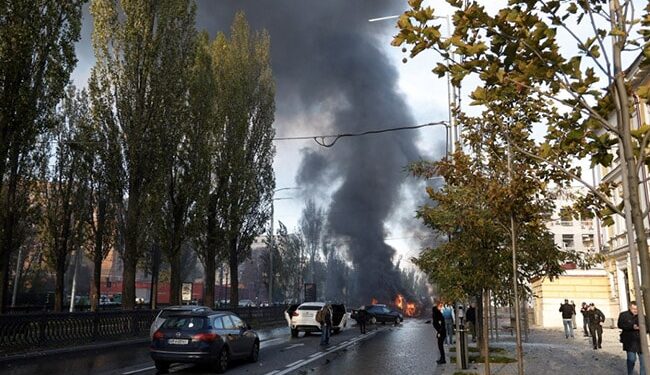 The Ukrainian presidency said on Monday there were strikes in “many” cities in Ukraine, a day after Moscow blamed Kiev for an explosion on a bridge connecting Crimea to Russia.

“Ukraine is under attack by missiles. There is information about strikes in many cities of our country,” Kyrylo Tymoshenko, deputy head of the president’s office, said on social media, calling on the population to “stay in shelters”. Kiev says Russia fired 75 rockets at Ukraine on Monday morning.

The explosions hit Kiev around 8.15 am local time (0515 GMT), and an AFP journalist in the city saw numerous ambulances heading towards the blast site. Kiev heard at least five explosions on Monday morning.

Here are the Live Updates on the evolving situation in Ukraine:

“I have already said that today Ukraine is not only discussing strikes on the territory of Belarus, but planning it,” state news agency Belta Lukashenko was quoted as saying.

Moldova said on Monday that Russian cruise missiles targeting Ukraine had crossed its skies, and called on the Moscow envoy to seek clarification.

I have instructed the Russian ambassador to explain.

Volodymyr Zelensky said Russia timed its attacks on Ukraine on Monday to inflict the greatest possible losses on people and also attacked the country’s energy infrastructure.

“They want panic and chaos, they want to destroy our energy system,” President Zelensky said.

As explosions hit the Ukrainian capital Kiev today, videos documenting the massive destruction in the city started making the rounds on social media.

The images, shared by journalists, showed smoke billowing from destroyed buildings and huge craters created by rockets. Read here.
“Russia is trying to wipe us off the face of the earth”: Zelensky On Strikes
“They are trying to destroy us and wipe us off the face of the earth…destroy our people who sleep at home in (the city) Zaporizhzhya. Kill people who go to work in Dnipro and Kiev,” Ukrainian President Volodymyr Zelensky said today. Read here.
Ukraine said there were strikes in “many” cities in Ukraine today, a day after Moscow blamed Kiev for an explosion on the Kerch Bridge connecting Crimea to mainland Russia. Read here.