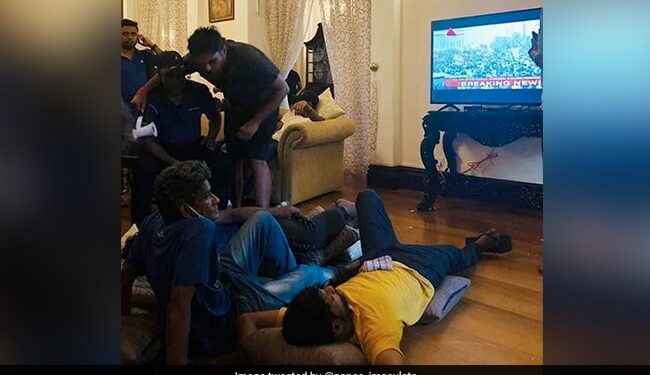 Sri Lankan President Gotabaya Rajapaksa will step down on July 13.

Protesters in Sri Lanka have taken control of every nook and corner of the President and Prime Minister’s residence in Colombo. After videos and photos of them working out in the gym, swimming in the president’s pool, dining in the kitchen and relaxing in the bedrooms went viral, here’s another photo of them watching their own demonstration on television. inside the presidential house, surfaced online.

Shared on Twitter by user ‘anything is possible’, the image shows a group of men lying on the floor and watching live TV, apparently in the official home of Sri Lankan President Gotabaya Rajapaksa. They are pictured watching “breaking news” on television. The post’s caption read: “Sri Lankan protesters watch their protest at the presidential house.”

Take a look at the image below:

The extraordinary events in Sri Lanka are the culmination of months of mostly peaceful protest in the country. The country is reeling under a severe foreign exchange deficit that has led to its worst financial crisis in nearly seven decades. Sri Lanka has been hit by severe food and fuel shortages and prolonged power outages.

During a severe economic crisis, huge angry crowds gathered at Mr Rajapaksa’s official residence this weekend, chanting slogans and waving the national flag before breaking through the barricades and entering the property. Online videos and photos showed people wandering around the house taking a dip in the president’s pool. They were even filmed wrestling, apparently on the Prime Minister’s bed.

President Rajapaksa, on the other hand, has fled the country. The Sri Lankan government has said that Mr Rajapaksa would resign on 13 July. Prime Minister Ranil Wickremesinghe also said he was ready to step down and make way for an all-party government to take over.

Also read | Lanka protesters have lunch, go to the gym: scenes in the president’s house

Meanwhile, General Shavendra Silva, the chief of the Sri Lankan army, has sought popular support to keep the peace as the country grapples with an unprecedented crisis.